The All-Star closer vs. the backup catcher: Inside the biggest mismatch in pro sports 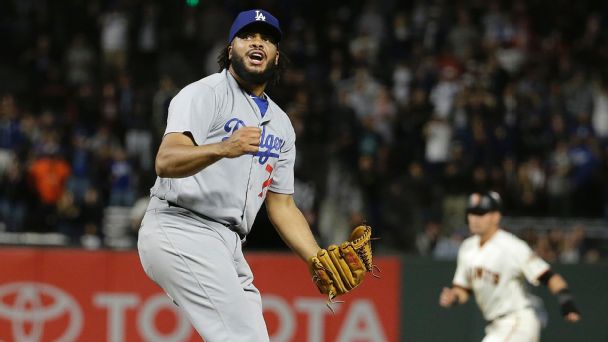 Professional sports do a good job preventing egregious mismatches. Only comparably good players generally play in the same league, and if one player is repeatedly humiliated by another, the humiliated can probably be benched, hidden, repositioned or given another assignment. All players have good days and bad days, maybe even good matchups and bad matchups, but rarely -- verging on never -- will an athlete playing at a sport's highest level be made to look truly hopeless.

The biggest recurring mismatch in professional sports has done that. It's between Kenley Jansen, the Dodgers' closer, and Nick Hundley, a free agent who was most recently the Giants' catcher.

Sure, you say: Jansen is an All-Star and Hundley is a backup catcher. But give Hundley a lot more credit than that. He has earned $19 million as a professional baseball player, not counting per diems, autograph appearance fees, and the gift certificates he receives for appearing on radio postgame shows. He has batted at least 200 times in each of the past 10 seasons. Of the 32 players picked in the second round of the 2005 draft, only two have more career WAR than Hundley, and only two have played more games. Twenty of those 32 never made the majors, but Hundley did, and he stuck, because he's a real major leaguer. He has hit walk-off home runs, he has broken up no-hitters, he has played in the postseason. Nick Hundley is a great outcome.

He is not anywhere close to the worst hitter in baseball. And Jansen isn't the best pitcher. But put them together and grotesqueries occur.

Here's the topline: In 12 plate appearances against Jansen, Hundley has one walk (back in 2011) and one sacrifice bunt. The other 10 times he has struck out, which makes him, officially, 0-for-10, 10 K's. You've only just begun to appreciate this matchup, though.

Cutters. He throws him cutters. As he does to almost everybody, he throws the cut fastball over and over, and to Hundley especially he throws it over and over:

It's not like Hundley just hasn't guessed right yet. Out of 52 pitches, 48 were the same pitch, with basically the same movement, at basically the same velocity, and almost all of them with basically the same target at the upper, outer part of the strike zone. Some of those pitches miss inside, some end up higher or lower, but Hundley has seen, overwhelmingly, one single pitch, and after endless repetitions he still can't hit it. Indeed, as we'll see, he's getting worse.

But what's especially fun about this is that Nick Hundley is especially good at hitting cutters. Against all cutters -- including the ones Jansen has thrown him -- he has hit .307 in his career, with a .480 slugging percentage, both of which are his highest marks against any pitch type. He's a below-average hitter generally but on cutters he convincingly outhits the rest of the league, which has batted just .260 with a .408 slugging percentage against the pitch. The league's weighted on-base average -- an all-in-one offensive metric -- is .320 against cutters, while Hundley's is .361. Matt Carpenter had a .361 wOBA overall last year. Paul Molitor and Don Mattingly had career wOBAs of .361.

"I'm really surprised he's never had much success against Jansen because he hits the ball to right field so well, and that's how you beat cut from a right-handed pitcher if you're a right-handed hitter," Mike Krukow, the Giants' broadcaster, said during the 11th matchup between these two. Krukow is right. The numbers bear it out. Nick Hundley was built to hit Kenley Jansen, and yet Jansen has so thoroughly destroyed Hundley that we're devoting an entire article to the scale of this humiliation.

Of course, a moment after Krukow said that, Jansen would throw Hundley the rare slider:

2. When Hundley swings at it

Jansen missed the first month and a half of the 2015 season after having a "mass" removed from a bone in his left foot. His first appearance was against Hundley and the Rockies. "Maybe that mass was what made him so good," Hundley might have hoped as he walked to the batter's box, 0-for-5 against Jansen to that point. "Maybe now he'll be bad! Maybe now I will win!"

Sure enough, Jansen's velocity was down. The four cutters he threw Hundley averaged less than 92 mph. Two days later he'd be sitting at 94, and two weeks after that he'd be up to 95, but on this day Hundley had his chance.

He swung three times and whiffed on all three.

Hundley has swung at 33 of Jansen's pitches. He has whiffed on 22 of those swings. Another was a foul tip, hung onto for strike three, but even if we count that foul tip as contact, he has a 33 percent contact rate against Jansen. Almost 700 batters saw at least 50 pitches last year -- including about a hundred pitchers -- and only one (Asher Wojciechowski) had a contact rate lower than 33 percent. Nobody, not even pitchers, had a contact rate lower in 2016, 2015 or 2014.

On Sept. 22, 2016, Hundley faced Jansen for the 10th time. The first pitch was a cutter well inside, and Hundley took sort of a half-swing, tapping a ball foul toward the third-base dugout. This is, near as I can tell, the only time Hundley has hit a ball forward against Jansen.

Now, to reiterate: This was a pitch Hundley should never have swung at, especially on the first pitch of an at-bat, when he has no obligation to protect or swing at anything but his pitch. This was a swing Hundley didn't even bother to complete. This is a ball that went maybe 50 feet, and in the wrong direction, almost clipping his own shin on the way out of play. But it went forward. It is the closest Hundley has come to doing what a baseball player is supposed to do: Hit the ball toward the other team.

When it comes to full swings against Kenley Jansen, that foul ball is the entirety of Nick Hundley's highlight reel. Just watch the rest of the at-bat:

Pitch 2: A swinging strike on a cutter way out of the zone, up at his right shoulder; he appears to swing about four inches under it.

Pitch 3: Cutter right down the middle, and he fouls it back:

You can't see Pitch 4 on that plot, because it is directly behind the third pitch, the exact same pitch, squarely in the middle of the strike zone. Hundley missed the first one, but Jansen gave it to him again! But he delivered it with a deceptive quick pitch, and Hundley was way late. Hundley walked back to the dugout jerking his bat angrily and muttering bad words through a wad of gum, and in this muttering we can lip-read two separate frustrations coming together: Frustration at himself for failing to hit, and frustration at Jansen for being unhittable.

Of the 52 pitches Hundley has seen, a whopping 13 of them have been balls. That's, well, not actually that many. Nobody in the past decade has thrown at least 50 pitches in a season while throwing strikes three-quarters of the time, as Jansen has to Hundley.

But what's secretly amazing is how many of those 13 probably should have been strikes. Five of them, according to ESPN Stats & Information research, were in locations called strikes at least 50 percent of the time. (Another was a strike 48.5 percent of the time.)

So, while we wanted to give Hundley credit for reaching base once against Jansen -- he drew a walk in their second matchup, back in 2011, taking all five pitches he saw -- we're forced to point out that at least one of the four balls (Pitch 3) should clearly have been called a strike.

The more Jansen faces Hundley, the more he simply pounds strikes in the zone. Since June 2013, Hundley has faced Jansen nine times. Jansen has thrown him two balls. Two! And one of those two balls was 92 percent likely to be called a strike, based on its location. It's pitch No. 2 here:

Of course, one reason Jansen has thrown Hundley only 13 balls in 12 plate appearances is Hundley has helped him. Hundley has seen 18 pitches that were less than 50 percent likely to be called strikes, in most cases less than 5 percent likely. He has swung at more than half of those pitches: Seven whiffs, three fouls.

If you're a batter, you'd prefer the guy who owns you not be a closer. If it's a closer, as Jansen is, then your worst plate appearances are likely to come in the biggest possible moments. The last time Hundley faced Jansen was Sept. 12, with the bases loaded and two outs in the bottom of the ninth inning. Jansen had a two-run lead, and Hundley was in position to be the hero. Before the plate appearance began, the Dodgers pitching coach visited the mound, which drew some mockery from the Giants' broadcaster Krukow. "I think if you're Rick Honeycutt, you go, 'Hey, Kenley, what do you think about throwing 94-mph cutters at him?'"

Krukow is the broadcaster who is generally credited with spreading the term "ownage" to describe one player's dominance of another. He once told the San Francisco Chronicle's Henry Schulman about the hitter who had ownage over him, Darrell Porter.

"I invented pitches. Seriously," Krukow said. "I was throwing new grips at him, thinking, 'This has got to work.' No matter what I threw, as soon as I threw it in the strike zone, it was going out the other way. It's like he knew what was coming. I tried every part of the strike zone, every type of movement I had, and I flipped him on his butt twice. He'd just get up and dust himself off. I see former St. Louis closer Bruce Sutter to this day and he still goes, 'You're the only guy in the entire league who can't get Darrell Porter out.'"

It's arguably more frustrating for Hundley, though. He's a hitter. He can't invent new pitches. He can't flip Jansen on his butt. He can't decide what pitches will be thrown, or where. He can't do anything except swing, which never works; or take, which rarely works; or bunt, which worked once.

That bunt is, other than the early walk, the one success Hundley has had against Jansen. Perhaps respectful of Jansen's stuff, he didn't try to hide his intent, squaring around before the pitcher had begun his motion. It wasn't a great bunt, fairly hard and right back to the pitcher, on the side of the mound right-handed pitchers fall toward. In most cases, it was probably not good enough to get the runner over. But Jansen falls almost backward when he releases the ball, and he's huge, and he doesn't have to field his position very often, so he took his time and got the sure out at first. Hundley succeeded. He found Jansen's weakness. For just one pitch there was nothing Jansen could do to stop Hundley.