This incredible World Series gets the Game 7 it deserves 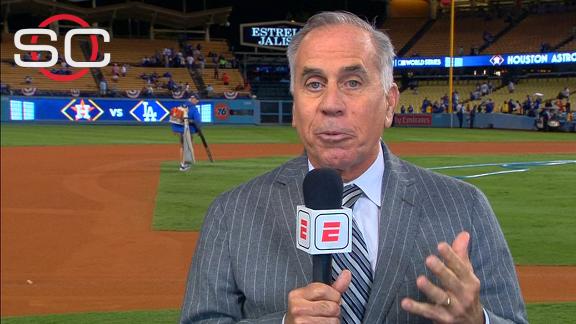 LOS ANGELES -- The Los Angeles Dodgers and Houston Astros have outlasted Halloween. Now all they have to do is try to outlast each other.

The 2017 World Series has been building toward a crescendo from the moment Jackie Robinson's family threw out the ceremonial first pitch before Game 1. The Dodgers and Astros have traded leads, home runs, home-field advantages, gut punches and momentum under a California sky, a retractable roof in Texas and back again. And now the one missing piece that distinguishes the very good or even excellent series from the true classics is finally here.

It's going the distance.

The suspense will end Wednesday night in Los Angeles with the Game 7 this series so richly deserves. For only the third time in history, two 100-win teams will play a seventh game to decide a title. The 54,000-something fans in attendance probably won't need Ashton Kutcher, Mila Kunis, Kareem Abdul-Jabbar and Rob Lowe waving flags and dancing on the dugout roofs to reinforce the magnitude of the situation.

"Now that it's going to seven games, it's got to be considered as the best World Series of all time," Houston shortstop Carlos Correasaid. "Seven games of nonstop, great baseball."

This will mark the 39th time the World Series has gone seven games. Of the previous 38, the road team has come out on top 19 times. It has happened twice in the past three Octobers -- when the San Francisco Giants took down the Kansas City Royals at Kauffman Stadium in 2014 and the Chicago Cubs beat the Cleveland Indians at Progressive Field last year.

When Dodgers closer Kenley Jansen struck out Carlos Beltran to seal a 3-1 Los Angeles victory Tuesday, it felt like destiny.

"I think it seems fitting," Dodgers manager Dave Roberts said. "You've got the two best teams in baseball going head-to-head. Like we've talked about from the beginning, these two teams mirror one another. And the [competitiveness] and fight in both teams is the most important thing I see as similarities."

So many personal stories will be resolved in unforeseen ways in Game 7. Yu Darvish, Los Angeles' scheduled starter, was the reluctant center of attention in Game 3, when he lasted 1 2/3 innings and was the target of a racially insensitive gesture by Houston first baseman Yuli Gurriel. Darvish acquitted himself nicely with his show of class under difficult circumstances, and he'll once again take the mound and face Gurriel, who was booed relentlessly by Dodgers fans Tuesday.

"Sometimes things play out in a way where you can't script it," Beltran said.

The Astros will counter with Lance McCullers Jr., who made his first All-Star team this year, faded in the second half because of injury and has re-established himself in October thanks to a bottomless reservoir of curveballs and self-confidence.

As ESPN stats maven Sarah Langs points out, the Astros tend to go as their double-play combination goes. Since the start of the American League Championship Series, Jose Altuve and Correa have hit .435 in Houston victories and .070 in Astros losses. They went a combined 0-for-8 against Rich Hill and the Dodgers' bullpen in Game 6, and Altuve failed to hit the ball out of the infield in his four plate appearances.

The Dodgers are finding inspiration from some unexpected sources. Joc Pederson, who hit only two home runs in 99 at-bats after the All-Star break, launched his third homer of the World Series off Joe Musgrove and frolicked around the bases like a 10-year-old. And why not? Pederson had just joined Hall of Famer Duke Snider, Reggie Smith and Davey Lopes as the fourth player in Dodgers history to hit at least three homers in a single World Series.

Against the chaotic backdrop of the first six World Series games, the Houston and Los Angeles bullpens are likely to play a huge role in the finale, as relievers from both teams pitch through soreness, fatigue and the relentless pressure of October.

Dodgers power righty Brandon Morrow rebounded from a rough outing in Houston with a scoreless inning in Game 6. Closer Jansen threw 19 pitches in his 77th outing of the season, but he'll be ready. And Clayton Kershaw is also in the mix on two days' rest. He's been chewing on his disappointment since he failed to protect 4-0 and 7-4 leads in Los Angeles' 13-12 loss in Game 5 on Sunday. You can practically hear Kershaw's teeth grind as he chafes to get back on the mound and redeem himself.

Should the need arise, the Dodgers can also call upon Alex Wood, who threw 5 2/3 hitless innings to begin Game 4. When asked how many pitches and/or innings he's ready to throw in Game 7, Wood replied, "As many as they need."

As players from both teams lingered in the respective clubhouses, the sense of anticipation was already building. On the Dodgers' side, outfielder Enrique Hernandez lent an air of humor to the proceedings in a Chewbacca costume that he wore to the park in celebration of Halloween. Across the clubhouse, teammate Justin Turner reflected on the emotional lift the Dodgers received from the home crowd.

"It was going crazy tonight," Turner said. "I can see a TV, and there's still a bunch of them out there right now. They're still here. They don't want to go home, which is confusing. You'd think they would want to go get some candy."

The majority of the World Series participants, who reported to spring training almost nine months ago, are running on adrenaline and muscle memory at this point. Some go home and collapse from exhaustion, while a few have admitted that their minds are racing at warp speed and it's hard to sleep for more than a few hours at a time.

The magnitude of the moment will hit the players full-force when they arrive at the park Wednesday and contemplate the stakes. Do they adhere to the same routines they've followed since Opening Day, or take a deep breath and look inward in the hopes of summoning something special?

Beltran, who gave the Astros an impromptu pep talk when their spirits were lagging during the ALCS against the Yankees, said he might have a few words of veteran advice for his young teammates. Or he might not.

"I have to wait and see how we look," Beltran said. "If the energy is there, there's nothing to say. If we're flat, I might say something to everybody about leaving everything out there. But it's Game 7. This is what you dream of as a ballplayer -- to be in these types of situations. I hope these guys are ready for it."

Sometimes, it takes a seasoned observer to cut through the tension and provide some welcome perspective. As Roberts entered the interview room for his Game 6 postmortem, Dodgers legend Tommy Lasorda summoned him outside, hugged him and said, "Remember, it doesn't mean s--- unless you win Game 7."

"Thanks for the words of encouragement," Roberts said.

As the players showered, dressed and decompressed, Dodgers president Stan Kasten weaved his way through the crowd of family members and friends outside the home clubhouse on his way to the elevator upstairs. Kasten was a central figure in the Atlanta Bravesdynasty that won 14 straight division titles in the 1990s and early 2000s but won only one World Series. So he understands the highs, the lows and the historical significance of the road the Dodgers and Astros have taken.

Kasten paused briefly on his way out the door and articulated what pretty much everyone at Chavez Ravine was thinking as this wonderfully captivating display of baseball finally approached a conclusion.

"The greatest thing in sports,"' he said. "The seventh game of the World Series."