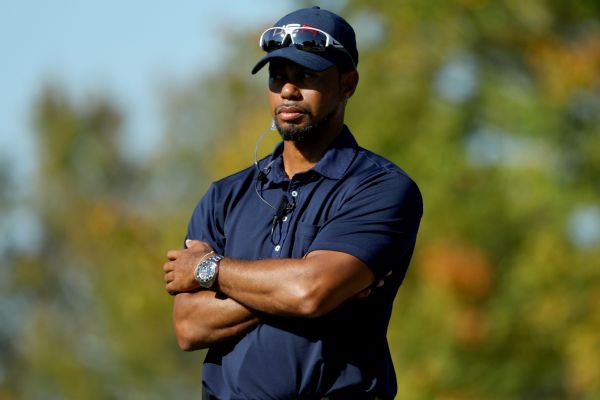 Tiger Woods remains steadfast in his belief that he can catch -- and break -- Jack Nicklaus' record of 18 major golf championships, but he won't be devastated if he doesn't accomplish the feat.

Woods, 40, who has been stuck on 14 major championships since winning the U.S. Open in 2008, was asked about the hallowed number during a PBS interview with Charlie Rose that is scheduled to air Thursday night.

"To be honest with you, no," Woods said when asked if he could catch Nicklaus' mark.

Asked by Rose if he has accepted that, Woods said, "I've accepted I'm going to get more."

When he was later asked if he meant he intends to break Nicklaus' mark, Woods simply said, "Correct."

Woods, who regards Nicklaus as one of his heroes, was asked by Rose if the icon is the greatest golfer to have played the game.

"I think I'm pretty good, too," Woods said. "I think he and I would have a hell of a duel back in the day."

He continued: "I looked up to him, I looked at his record. ... I wouldn't say I lusted for his record. I just think that was the gold standard because he had won the most majors and the second-most Tour events. And here he is at 18."

And what would it mean to Woods if he doesn't get to Nicklaus' mark?

"I didn't get there," Woods told Rose.

Woods hasn't played in a tournament in more than 14 months after having two back procedures; he pulled out of last week's Safeway Open after saying his game was "vulnerable and not where it needs to be."

In the interview, Woods discussed his time away from the PGA Tour, what it will take to win again, family life and possible regrets.

"You know, if you look back," Woods said, "the only regret I have in life is not spending another year at Stanford, and I wish I would've had one more year."

When pressed about the scandal and controversy that has followed Woods since his publicized divorce in 2010, Woods stood by his statement.

"All the things I've been through are tough, yes," Woods told Rose. "They've been tough, but they've been great for me. But I wish I would've gone one more year at Stanford."