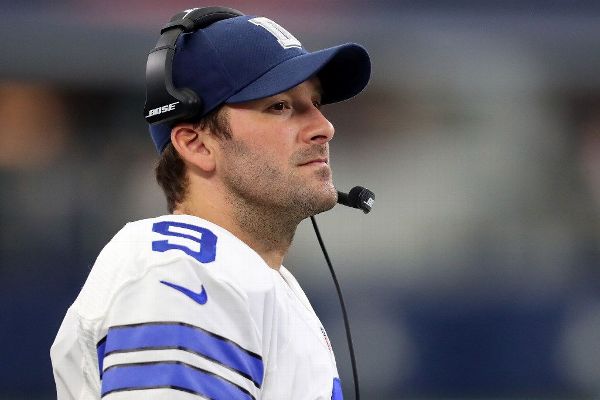 PHILADELPHIA -- With 13 minutes left in the second quarter Sunday against the Philadelphia Eagles, Tony Romo was again the Dallas Cowboys' quarterback.

Romo replaced rookie Dak Prescottand saw his first regular-season action since Thanksgiving 2015 in what could be his final appearance with the Cowboys and potentially his career. Romo is the franchise leader in touchdown passes and yards.

On his first drive, Romo completed 3 of 4 passes for 30 yards, ending the Cowboys' drive with a 3-yard touchdown pass to Terrance Williams. It was Romo's first touchdown pass in a game since Nov. 22, 2015, against the Miami Dolphins and the 248th of his career, extending his Cowboys record.

"You expect to go out there and do something well," Romo said after the game. "It felt normal."

Romo's return was brief, however, as he was replaced by Mark Sanchez on the next drive. Sanchez finished out the game, a 27-13 Cowboys loss.

One of the first players to greet Romo on the sideline was Prescott.

"I want the football every possession, but it was fun to watch Tony make it look so easy," Prescott said.

"Ultimately you're going to be defined by what you do on Sunday, but in my experience if you're not doing it throughout the week, Sunday is going to be difficult," he said. "I feel like I've been practicing well and I just wanted to prove to myself and prove to the coaches and teammates that I can be the same guy."

By giving Romo at least a little action, the hope is he would be not be as rusty should something happen to Prescott in the playoffs.

"Tony stepped out there and looked just like he's looked at practice, like he's just ready to go," Cowboys owner Jerry Jones said.

Romo suffered a compression fracture in his back on Aug. 25 against the Seattle Seahawks in the preseason, which opened the door for Prescott. After losing the opener, Prescott won 11 straight games and helped lead the Cowboys to an NFC East title and home-field advantage in the playoffs.

In the first 15 games, Prescott, who was named to the Pro Bowl, completed 307 of 451 passes for 3,630 yards with 23 touchdown passes and four interceptions. He also has run for six touchdowns, a franchise record.

Romo missed the first nine games of the season as he recovered from the back injury. It was the third time in five games -- preseason or regular season -- in which Romo was knocked out of a game due to injury.

He suffered a broken left collarbone against the Eagles in Week 2 last season and broke the bone again last Thanksgiving against the Carolina Panthers.

Upon his return last month, Romo backed Prescott as the starter with an emotional statement in which he said he felt like an "outsider" during his injury but Prescott "earned the right to be our quarterback." Romo has served as the No. 2 since the Nov. 20 win against the Baltimore Ravens. Had he not played Sunday, this would have marked the first time since 2003, his rookie season, in which he did not see the field in some capacity in a season.

Romo throws TD pass on first drive of season in Cowboys' loss
Playing in his first game since the preseason, Tony Romo throws a 3-yard touchdown pass to Terrance Williams.