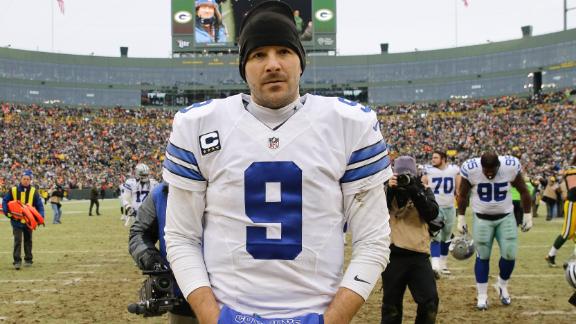 IRVING, Texas -- Dallas Cowboys quarterback Tony Romo is not pleased with the NFL's actions that led to the cancellation of the National Fantasy Football Convention scheduled to be held in Las Vegas on July 10-12.

"It's like when you're in high school and you don't get invited to the party, it makes you feel bad," Romo said Tuesday on ESPN's The Herd with Colin Cowherd. "If they really wanted to just be a part of it, all they had to do was just call and ask. It would've been a lot easier, I think, than going about the process the way they did. We understand that these things come about and there's big money involved sometimes from the NFL's perspective. If we had known about the issue of the place or thought that was something that could've been an issue, the NFL could've told us that right away. That's where it makes it interesting."

The league recently contacted the NFL Players Association about the event to remind the players of a long-standing league policy that "players and NFL personnel may not participate in promotional activities or other appearances in connection with events that are held at or sponsored by casinos."

The NFFC was scheduled to be held at the Sands Expo and Convention Center, which does not have on-site gambling. More than 100 players, including stars such as Rob Gronkowski, Dez Bryant and DeMarco Murray, were scheduled to attend the inaugural convention in which they would have interacted with fantasy football players in question-and-answer sessions and other events.

The event was announced in March, but the league said it only recently became aware of it. The league also stated that it had contacted the organizers, which Romo denied. Romo went on to say he thought the league's communication with the NFLPA served as a "scare tactic."

Romo said he talked with the NFLPA and hopes that it will back the players, but the association has not made a public comment yet.

"The NFL never called me or my agency or the NFFC," Romo said. "They just went about the process of communicating to the players and the NFLPA. I think when that takes shape I think you understand that the NFL was really trying to not necessarily cancel the event. I think more than that they were trying to probably persuade people not to attend the event."

The NFL said it is looking into other Las Vegas events that are scheduled to feature current players later this summer. The league did not comment on individual players, like Gronkowski and New England Patriots teammate Malcolm Butler, making paid appearances at Las Vegas casinos.

Romo referenced a recent sponsorship agreement between the MGM Grand Detroit and the Detroit Lions for a field-level club area being added to Ford Field.

"They talk about how no players or NFL personnel are to be associated [with casinos], well, I'm like, that doesn't really make sense," Romo said. "There's just far too many cases and it does make it sound sometimes that it's an issue about money, which is disappointing because we were just trying to get the fans to hang out with players."

The NFFC has offered refunds to fans who had purchased tickets to the Las Vegas event or tickets to next year's event, to be held in Southern California.

Romo said the reaction from players involved in the NFFC has been overwhelming.

"These guys all go through the same types of fight and grind and we're all, we get on that field, we want to beat each other so badly, that it's unique to be able to have that sense to get off the field and enjoy a weekend with each other," Romo said. "That's what was frustrating for the players. And then [they] were really looking forward to showing their craft to some of the people that were going to show up and then meeting your fans, the people who really care about you. I mean that's just it seems like a no-brainer to me, especially since it really wasn't going to be something that I didn't think was going to break the NFL's hearts money-wise. But obviously they have an issue."