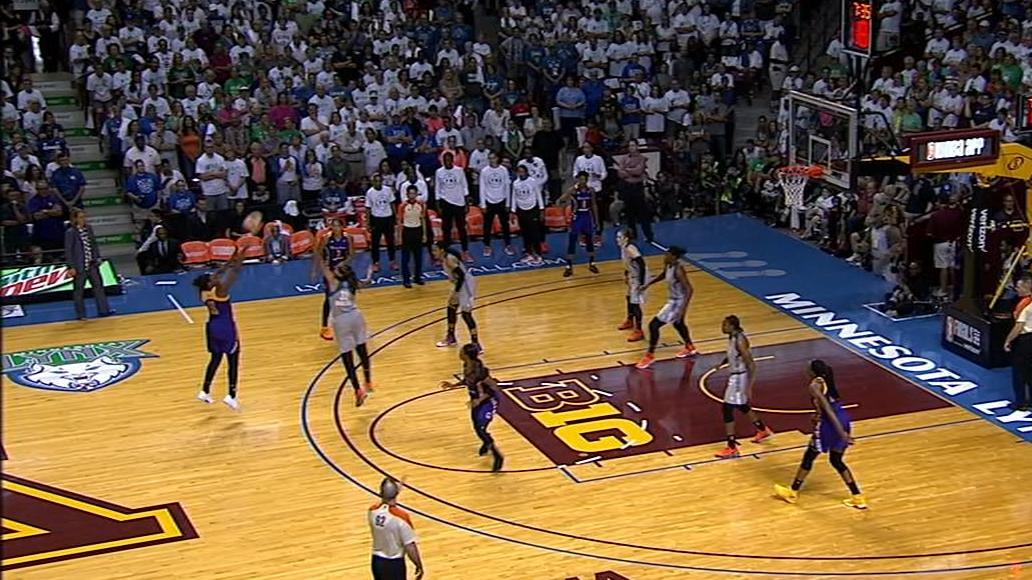 MINNEAPOLIS -- If the Minnesota Lynx had won Sunday, it would have been the greatest comeback in WNBA playoff history.

Game 1 of the WNBA Finals -- a 85-84 Los Angeles Sparks win -- technically wasn't over when the Sparks jumped to a 26-point first-quarter lead at Williams Arena, shocking the pro-Lynx crowd of 11,823, which arrived primed for an afternoon of screaming itself hoarse.

That the Lynx clawed back and ultimately took the lead twice in the final minute before losing Game 1 at home for the second straight year shouldn't have surprised anyone. The Lynx made a similar late push last year in Game 5, wiping out an eight-point Sparks lead in 61 seconds before Nneka Ogwumike's putback denied the Lynx a fourth NBA title.

But the bigger question, one that neither Minnesota coach Cheryl Reeve nor any of her players could answer, was how the Lynx, after waiting all season for another crack at the Sparks, could come out so off, so discombobulated, that the Sparks nearly ran them out of the building before the last fans settled into their seats.

"I've got no idea," Lynx guard Seimone Augustus said. "I couldn't give you rhyme or reason.

"Not to take anything away from L.A., but it's kind of on us. Turnovers led to easy baskets for them. Defensive schemes broke down. They got layups. That's all stuff that we have to correct. It's not necessarily something they schemed, and came up with a game plan we couldn't defend."

Ogwumike (twice) and Odyssey Sims broke free for layups on L.A.'s first three possessions. Chelsea Gray and Candace Parker followed with 3-pointers, and Parker a layup, and the run was on.

The Sparks hit their first six shots and 8-of-9, and the score was 22-2 before Minnesota's Sylvia Fowles, the league's most valuable player, touched the ball in the post. It was 28-2 before Fowles scored her first basket, with 1 minute, 49 seconds left in the quarter.

"How we started out was unacceptable," Fowles said.

Worse? The Lynx, the second-best rebounding team in the WNBA, finished the first quarter with none. Zero. Even while missing 11 of 15 shots.

"I know everybody's going to talk about what a great comeback it was, etc., but that's not the world we live in," Reeve said. "That means absolutely nothing to us. It's more what we did in the early part of the game that we're focused on. That obviously was disappointing."

Failing to find Fowles early proved troublesome. Augustus said the Sparks defended Fowles just as they did in the regular season, with Qgwumike the primary defender and Parker sliding down to help. So the Lynx tried to get Rebekkah Brunson going early from the perimeter, hoping to draw Parker from Fowles.

Good strategy. Bad execution. Brunson missed back-to-back jumpers early in Minnesota's 1-for-12shooting start. Other than one fallaway jumper by Maya Moore, no one else could hit anything either. Lindsay Whalen threw away the ball early trying to force it into Fowles, and two more bad passes led to turnovers.

"We tried to attack from the perimeter to try and loosen it up," Augustus said. "Obviously we weren't hitting shots, so it didn't help. It just compounded the mistakes that were going on and how we played in the first five minutes of the game."

Added Reeve: "They got the upper hand in those first five minutes. When that happens, you lose your focus. Then defensively, we were terrible. So the combination was really, really bad. We kind of lost trust in what we were trying to get done."

Brunson extended her league record by playing her 31st career Finals game, but she won't remember this one fondly. Seeking a record fifth championship, Brunson shot only 1-for-6 from the field for two points, with three rebounds and a garish plus/minus of -22. Reeve went with a three-guard lineup much of the second half, unsuccessfully trying to slow the hot-shooting Gray (27 points). That limited Brunson's overall court time to 15:55.

Down 12 entering the fourth quarter, the Lynx chipped back and grabbed the lead 82-81 with 49.8 seconds left on an Augustus 3-pointer from the top of the key. Augustus continued her postseason revival, scoring 19 points on 8-for-14 shooting, with three 3-pointers.

The Lynx began winning titles when Augustus assumed the role of shutdown defender. Now 33, Augustus isn't that defender anymore. But with 6.5 seconds left and the Lynx up by one, Reeve asked Augustus to reach back in time and do what none of her teammates could: stop Gray, just once.

But Gray had one more clutch shot in her. She took Augustus one-on-one, creating enough space to launch the game-winning fadeaway before Moore could arrive and help.

"We made her go the direction we kind of wanted her to go," Augustus said. "We made her take a jump shot, which is what we wanted to do, try to keep her out of the paint. She's been hitting that shot all game. It's tough to defend because she's fading away, leaning back. That was the best that I can do." 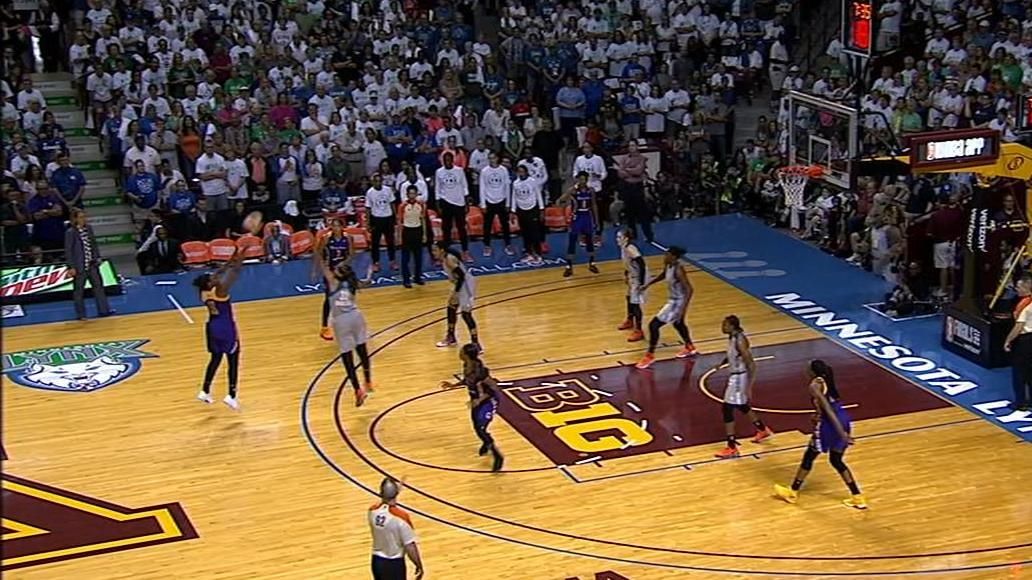 Sparks open game with 12-0 run
In Game 1 of the WNBA Finals, the Sparks start fast and jump to a 12-0 lead over the Lynx following a deep Chelsea Gray 3-pointer. 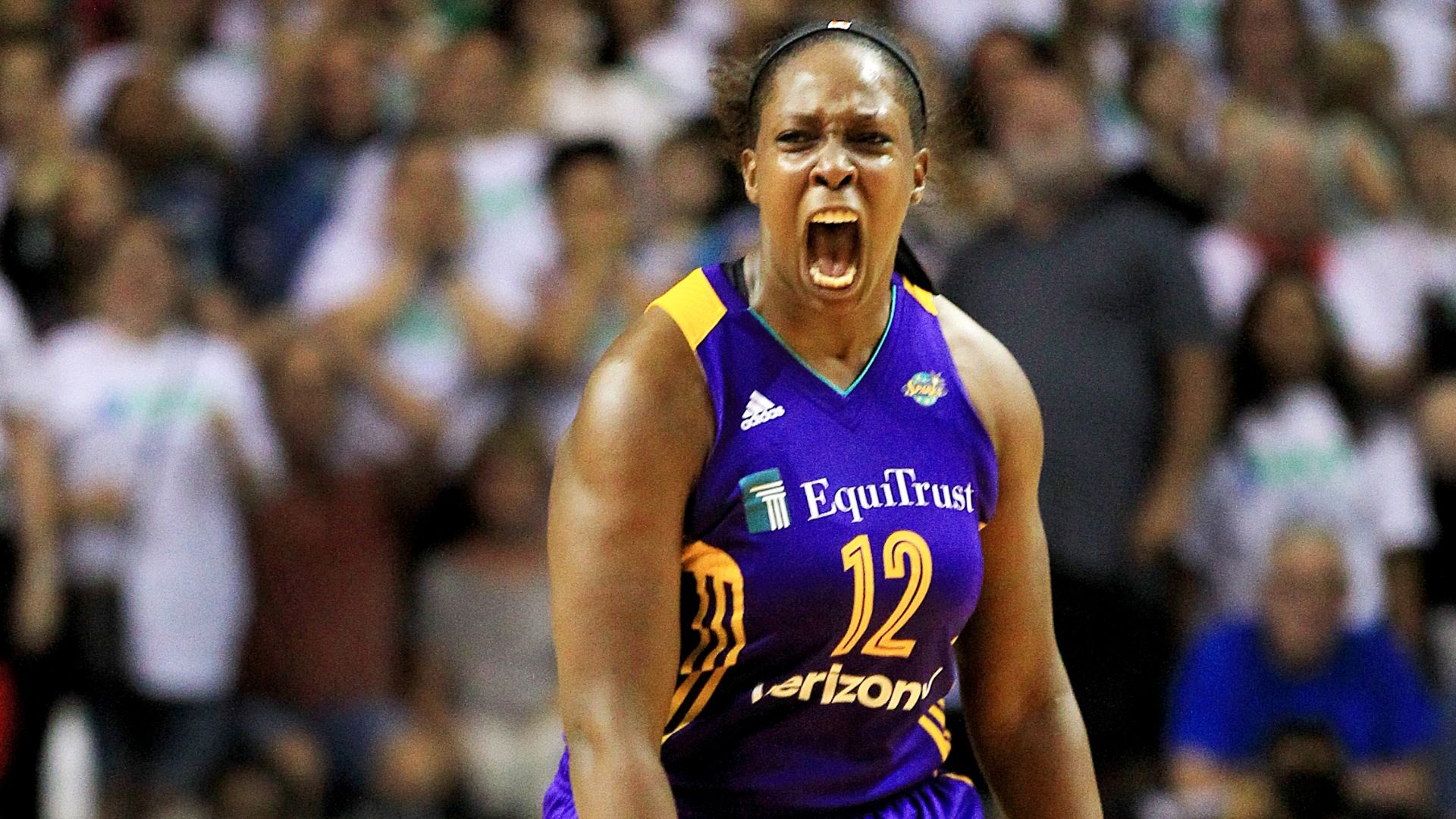 Sparks edge Lynx to take Game 1
Chelsea Gray hits a pull-up jumper with seconds remaining to give Los Angeles an 85-84 win over Minnesota in Game 1 of the WNBA Finals. 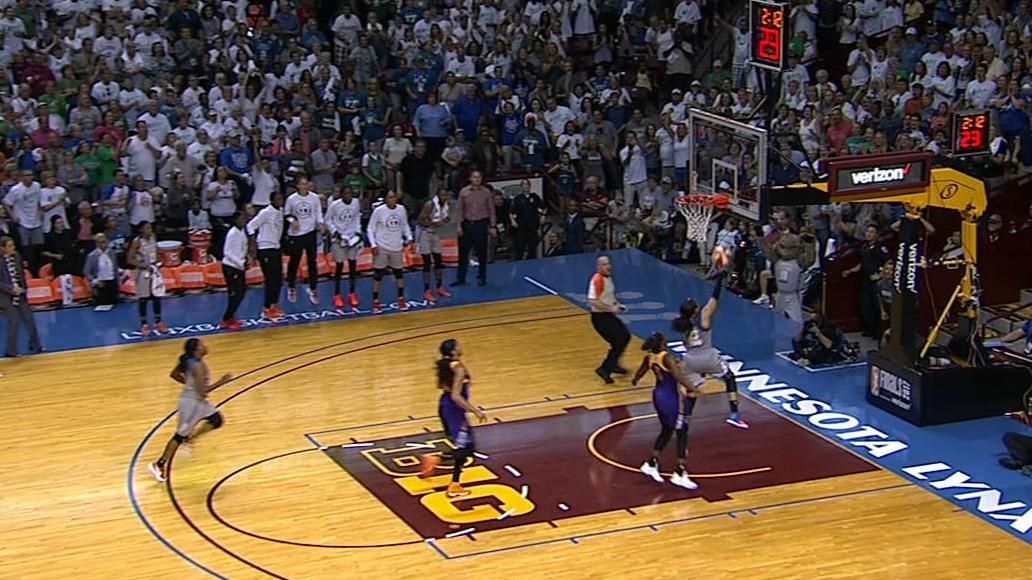 Moore powers Lynx comeback
Minnesota's Maya Moore drains a jumper than steals the ball and makes a layup to caps 12-0 Lynx run that ties L.A. 78-78 late in the fourth quarter.

Augustus drains three, brings Lynx within five of Sparks
After trailing L.A. 30-5 in the first quarter, Minnesota trails only 50-45 in the third following a Seimone Augustus 3-pointer. 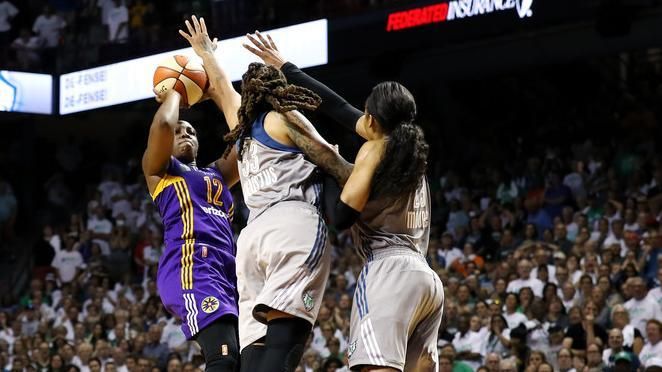 Gray's game winner gives Game 1 to Sparks
Down by one with seconds left, Chelsea Gray nails a 14-foot jumper to give the Sparks an 85-84 victory over the Lynx in Game 1 of the WNBA Finals. 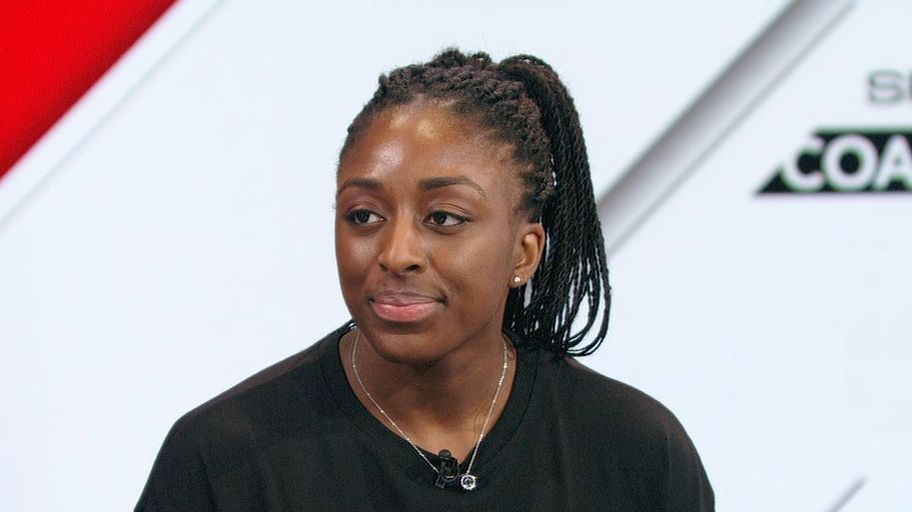