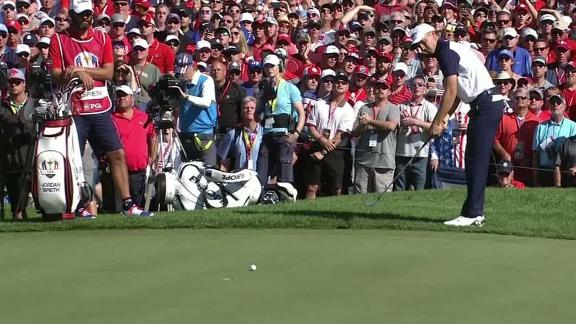 While perhaps not the best team ever assembled, the Americans were every bit of a team in finally winning back the Ryder Cup.

Phil Mickelson led the Americans behind closed doors, Patrick Reed powered them with his passion on the golf course and Ryan Moore, who a week ago wasn't even on the team, delivered the cup-clinching point Sunday at Hazeltine National Golf Club in Chaska, Minnesota.

Moore finished eagle-birdie-par for a 1-up victory over Lee Westwood, and the celebration was on. The United States beat Europe 17-11, picking up its first victory since 2008 and only the third over the past two decades.

"When put in the right environment, the U.S. team brought out some amazing golf," Mickelson said. "And we're bringing back the Ryder Cup because of it."

Never has an American team been under this much pressure.

They lost for the third straight time in 2014 at Gleneagles in Scotland, and it was a team divided over everything from how the captain was selected to how the team would be built. Mickelson led the way in getting a task force together, and it was hard to argue with the results.

"I'm just proud of these guys. They had a lot of pressure on them for the last two years," said U.S. captain Davis Love III. "Every time we picked a guy, they had more and more pressure, more and more questions. I'm just so proud of the way they played."

There was no meltdown like Medinah four years ago, when the Americans blew a 10-6 lead under Love.

Europe never really had a chance.

Reed faced the tallest order in the leadoff match with Rory McIlroy, and the quality of golf was as high as it gets. Reed squared the match by driving the fifth green to 8 feet for eagle, and he kept the tee until the 18th. He matched McIlroy's birdie on No. 6, McIlroy matched Reed's birdie on No. 7, and the par-3 eighth hole was as sensational as it gets in a Ryder Cup.

McIlroy holed a 60-foot birdie putt, leaped into the air and cupped his hand to his ear, mocking the American crowd to yell even louder. Reed then holed a birdie putt from 35 feet, charging the crowd before turning to wag his finger at McIlroy. They bumped fists and patted each other on the back, both 5-under through eight holes.

Their standard of golf dipped after that, perhaps because they spent so much energy pumping fists, and Reed finally took his first lead when McIlroy bogeyed the 12th hole. McIlroy's putter went cold, and Reed closed him out with a 7-foot birdie on the 18th.

Reed now is 6-1-2 in his two Ryder Cups, and he was the top points earner for the Americans this week.

Mickelson delivered 2 points, including a halve with Sergio Garcia in which both birdied the final two holes.Mickelson made 10 birdies and Garcia made nine birdies against no bogeys in their match.

As one of the most well-known vice captains in Ryder Cup history, Tiger Woods spent the week in Minnesota trying to help the Americans shake an ugly losing streak while also trying to keep as low a profile as possible.

Woods helped Lovewith several key decisions over the weekend, including keeping Jordan Spieth and Reed together for the afternoon fourball play Saturday. Woods said he could not have been happier to be involved.

"We were a team. Whether I was playing or not, I was part of a team," Woods said. "And our team won."

Among the lone bright spots for Europe was Thomas Pieters, the Belgian rookie who had the best debut of any European rookie by going 4-1. He took down J.B. Holmes in the third match, right after Henrik Stenson dismantled Spieth. By then, it was ominous.

The Americans stood atop a bridge to the left of the 18th green and sprayed champagne on themselves and the crowd, an enormous gathering that sent endless cheers of "U-S-A" and "Red, white, blue" across Hazeltine for three straight days.

Every U.S. player contributed a point. For Europe, Westwood was among four players who ended the week without a point.

Ahead of the final day of competition, the PGA of America pleaded with the raucous crowd to be respectful of all participants.

The PGA issued a statement Sunday saying security staff would remove any fans who "are disruptive in any way, including the use of vulgar or profane language directed at the players." McIlroy had been at the center of much of the heckling, and he responded forcefully after making big shots.

The Americans finished with their second-biggest margin of victory, behind only 1981, when they won 18 to 9.

That team is regarded as the best in Ryder Cup history, filled with 11 major champions. Love said in a radio interview going into the Ryder Cup, making a point that his players didn't have to do anything extraordinary, that this was "the best team maybe ever assembled."

All that mattered to the Americans was taking back that 17-inch gold trophy.