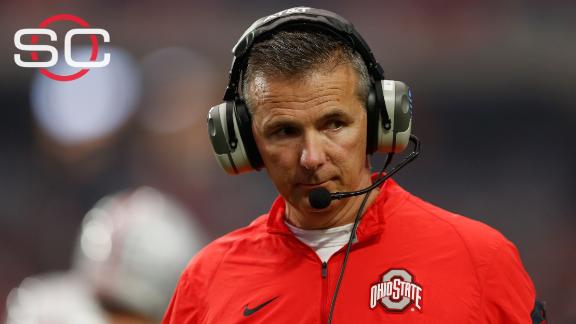 COLUMBUS, Ohio -- Urban Meyer clearly wasn't thrilled with the recent changes to recruiting rules, but it's the deregulation of text messages in particular that is bothering the Ohio State coach.

Along with banning satellite camps Friday, the Division I Council deregulated electronic communication with student-athletes in several sports including football. The change could allow coaches to send unlimited text messages to potential recruits and contact them on social media.

While the satellite camp rule doesn't appear like it will affect the Buckeyes much, both that change and the potential flooding of the phones of recruits have Meyer's attention as likely problems for student-athletes moving forward.

"The texting thing is the most ignorant thing I've ever heard in my life," Meyer said after practice Monday morning. "It's hard, but if they're making a decision because coaches are upset about it, that's not the point.

"Do you really want text messages from 100 universities on your phone when you come out of school? The ones I know don't. 'What? I don't want to hear from these schools.' Some intern is going to be punching text messages on your phone, and maybe you can block numbers and all that, but that's just too hard, right? Because it's easier on coaches? Maybe it's easier for the enforcement because people are doing it, but it just doesn't make sense."

The texting rule change brings football in line with men's basketball, which has had deregulated texting since 2012.

The Buckeyes had scheduled a satellite camp this summer in Georgia and participated in one in Florida last year, but Meyer has typically downplayed their importance to his program in the past.

Meyer also questioned the value of preventing coaches from other schools from working at off-campus camps, a tool he recalled as useful when he was a coach at Bowling Green and was afforded the opportunity to evaluate players at schools that attract far more recruits.

"I just hate to see -- the biggest thing and one that I didn't realize was a part of it -- that MAC schools can't come here," Meyer said. "There have probably been hundreds of scholarships come out of here to those young players. ... Not many kids can play at Ohio State, so either don't send them [here] or send them and allow Bowling Green to get a chance to watch him play.

"I wish they'd revisit that part of it. I think there's a knee-jerk reaction because people complained and all that, and I get that. It's a slippery slope. I'm not worried about the high-level players, because they're going to find a way to get where they need to get. I'm talking about, there's a big chunk of players who deserve to play major college football. I'm not saying it's right or wrong, because I don't really know. But you should always think first about the players."

If nothing else, Meyer made it clear that recruits should at least be consulted about potential rule changes and how they might affect them.

One former Ohio State player also took a shot at the NCAA on Monday, as Cardale Jones tweeted his frustration with the organization's rules.

Meyer has already tried to call attention to the likely fallout from deregulating text messages, including two months ago on national signing day. The change went ahead anyway, but Meyer is holding out hope the rules can be salvaged.

"Fire the coaches that do it," Meyer said. "Fire them. Make the penalties absolutely so out of control that they won't do it. You will never coach again in major college football if you on purpose text someone, and then move on to the next rule. Think about the student-athlete first.

"Put a student-athlete on that same committee and say, 'What do you guys think?' How many student-athletes are on those subcommittees? Ask them, what is your opinion of this? Listen to them."