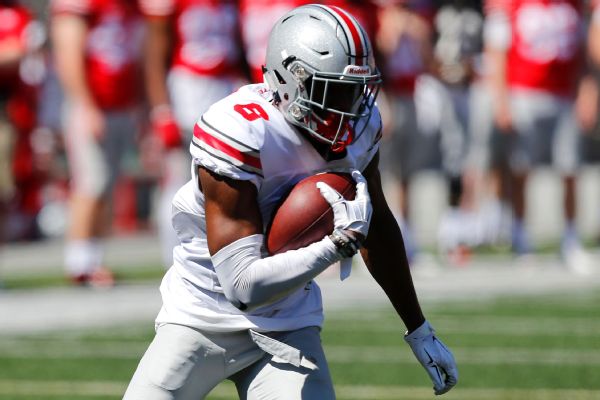 Gibson, a former five-star recruit, signed a junior college letter of intent with Mississippi Gulf Coast on Tuesday. He was suspended for the season in August, which drew public disagreement from Meyer because the punishment was issued by the university instead of the Ohio State athletic department.

"He came to see me, and I love Torrance," Meyer said Thursday. "Very unfortunate, the whole situation. I don't think there's anything finalized.

"I can assure you, as we always do, we are doing what's in the best interest of the student-athlete."

It appears Gibson's next chapter in college is likely going to be away from the Buckeyes, though, after Mississippi Gulf Coast coach Chad Huff welcomed him publicly to his program earlier in the week.

"We are looking forward to having Torrance join our football program," Huff said. "We are confident in his abilities on the field and his character off the field, and we expect him to contribute to our team and the Gulf Coast community."

Ohio State also had great expectations for Gibson when he signed in 2015 after a high-profile recruitment. He arrived as a dual-threat quarterback and moved to wide receiver; his dynamic athleticism and a logjam of passers ahead of him on the depth chart necessitated the position switch.

But the transition never seemed to be going smoothly, either on or off the field for the Florida native. Gibson never stepped on the field as a true freshman as he struggled to find consistency with his new responsibilities as a wideout, and he was suspended for a game during his redshirt season.

The hype that surrounded his recruitment resurfaced during practices in April, when Gibson capped off a productive month with six catches for 50 yards and a pair of touchdowns in the spring game. But again, that didn't last long with Ohio State announcing his semester-long suspension shortly before the season opener.

"It was not from the athletic department or football," Meyer said at the time. "I disagree with it."

Meyer didn't provide any details then on what transpired or what, if anything, could be done about it, given his opposition to the discipline. Ohio State has still not commented on the nature of the violation.

But nearing the date when Gibson could re-enroll as originally anticipated, it appears the plans have changed, leaving plenty of untapped potential with the Buckeyes as he heads elsewhere.