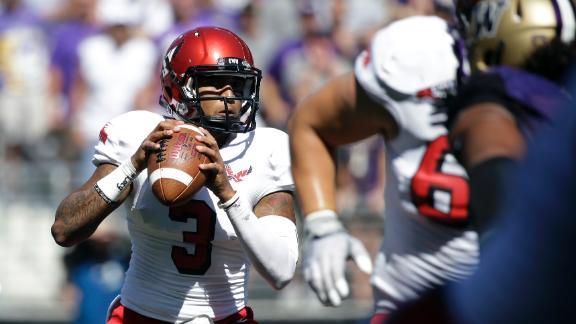 Quarterback Vernon Adams completed his long-awaited graduate transfer to Oregon on Thursday and will report to the Ducks' fall camp after completing his final academic requirement from Eastern Washington.

Oregon tweeted Thursday night that Adams had been added to the team's roster.

Adams was expected to be on campus in June, working out with the team and beginning his quest for the starting quarterback job left vacant byMarcus Mariota.

However, Adams was unable to join the team until he passed a math class, which he announced via Instagram that he completed Thursday.

Without passing the class, Adams wouldn't have been eligible to become a graduate student and couldn't have joined the Ducks for the 2015 season. Returning to Eastern Washington wasn't an option either, EWU coach Beau Baldwin told reporters after the Eagles' practice Wednesday.

But on Thursday, Adams officially joined the team, and Oregon coach Mark Helfrich will finally be able to publicly address the transfer situation, which probably became more difficult than he or the rest of the staff would have liked. To this point, Helfrich has refused to discuss any player not on Oregon's roster, leaving the discussion of the Ducks' quarterback situation vague.

On Wednesday evening, Adams posted on Instagram: "I wish I could have passed my math class the first time. But everything happens for a reason, right?"

Adams' transfer process began Feb. 9, when he signed his financial aid agreement with Oregon. With the math class behind him, he can begin practicing with the Ducks, who began fall camp on Monday.

But the Oregon quarterback job won't just be handed to Adams. Longtime Mariota backup Jeff Lockie had a great spring for the Ducks and continued to lead the team through offseason workouts and the first part of camp.

"I have total confidence in Jeff 100 percent," Helfrich said at Pac-12 media days. "The players do too, and that is probably the more important part."

But the most important part is which player can put it all together. And now Adams has a few weeks to catch up to Lockie.