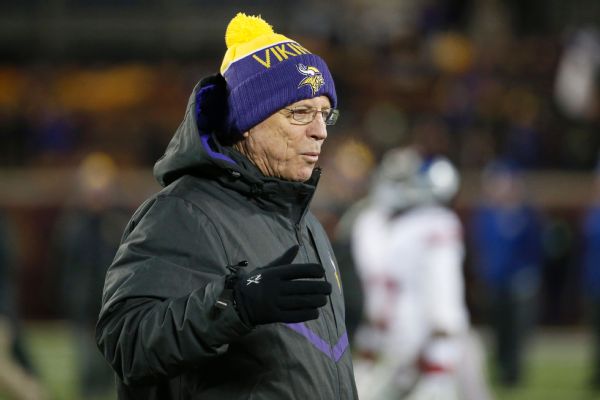 "I have tremendous respect for [head coach] Mike Zimmer, our coaching staff and our players and at this time I think it is in the best interest of the team to step down," Turner said in a statement. "I thank the Wilf family for my time here in Minnesota and want to see our players and coaches achieve success."

After Turner surprised Zimmer on Wednesday morning with his resignation, Turner told ESPN's Ed Werder, "I think it's just we have different views on where the offense was going."

Zimmer said later Wednesday that he was "very, very surprised" by the resignation, and called Turner, 64, a "very good friend of mine."

The resignation seemed to stem from a philosophical difference between Turner and Zimmer. As early as the 2014 off-season, Zimmer had gone to then-Bengals offensive coordinator Hue Jackson in order to pick his brain on offense, to be more educated in order to evaluate things for himself.

Zimmer also announced that he had a minor procedure on Tuesday for a torn retina.

Pat Shurmur, who was hired this offseason as the Vikings' tight ends coach, will be the interim offensive coordinator.

The Vikings lost 20-10 to the Chicago Bears at Soldier Field on Monday night, their second loss after a 5-0 start. They lost to the Philadelphia Eagles 21-10 on Oct. 23.

The Vikings are second-worst in the league in total offense and in yards per game, at 293.3. The team has also been hit by injuries to Adrian Peterson, who tore the meniscus in his right knee, and linemen Matt Kalil and Andre Smith. Quarterback Teddy Bridgewater suffered a dislocated knee and ligament damage in an August practice.

Vikings quarterbackSam Bradford said he was surprised when he heard the news about Turner.

The quarterback said he found out about Turner resigning when his wife called him after she saw a sports alert.

Minnesota safety Harrison Smith, on a conference call with Detroit reporters, said Turner's resignation sends a message that the Vikings need to get back on track.

"I've always loved Norv," Smith said, "but right now all I can do is focus on playing the Lions."

Turner's son, Scott, is the Vikings' quarterbacks coach, and will remain with the team.

Shurmur has been Bradford's offensive coordinator twice before -- in St. Louis in 2010, Bradford's rookie season, and in Philadelphia in 2015.

Zimmer hired Turner in 2014 following a one-season stint as offensive coordinator with the Cleveland Browns. Before that, Turner spent six seasons as the San Diego Chargers' head coach. At the time, Turner inherited a Vikings offense that ranked 13th overall but 23rd in passing.

The Vikings are the fourth team to change offensive coordinators since the season began. The Bills fired Greg Roman on Sept. 16, the Ravens fired Marc Trestman on Oct. 10 and the Jaguars fired Greg Olson on Friday.

The 5-2 Vikings, who are still in first place in the NFC North, host the Detroit Lions on Sunday.

ESPN's Ben Goessling, Michael Rothstein and The Associated Press contributed to this report.