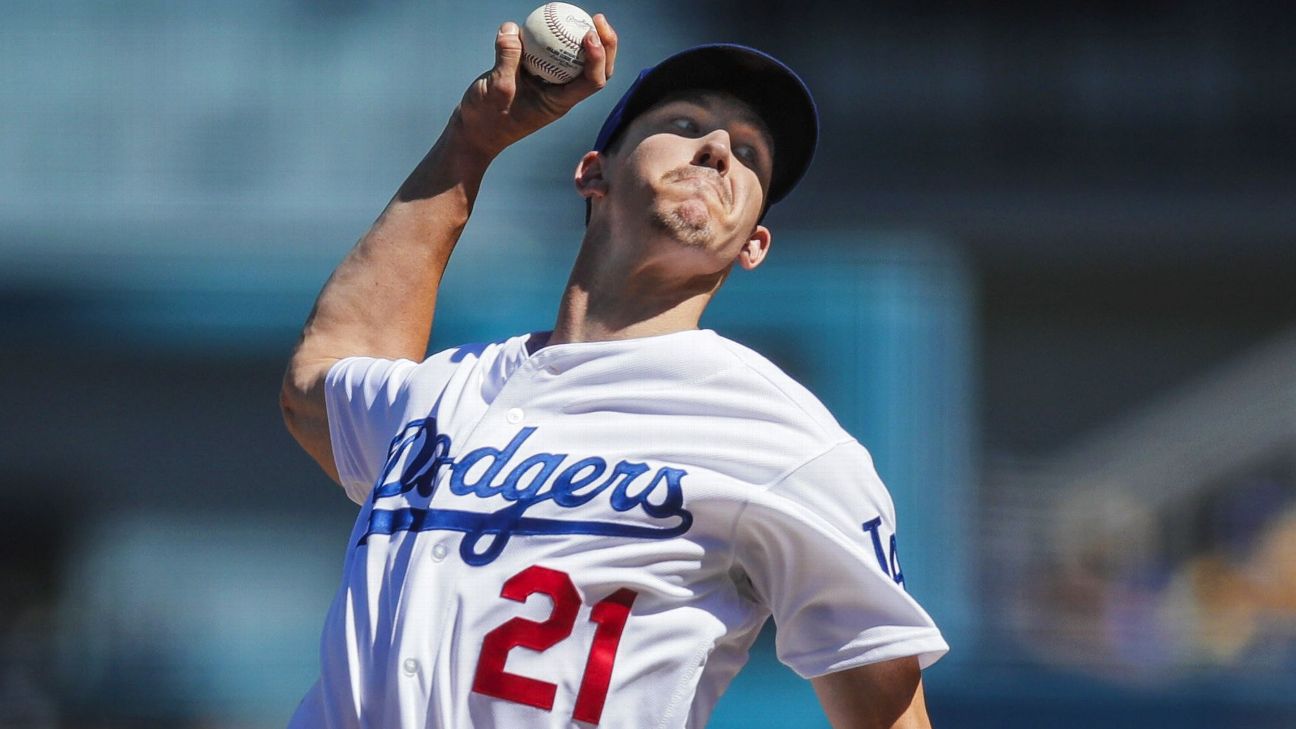 LOS ANGELES -- Ben Shaffar spent eight seasons plodding the minor leagues as a pitcher and finally gave up the dream in 2006, after tasting Triple-A in the Philadelphia Phillies' organization. He was going to finish school, then assimilate to a normal work life. But a friend kept badgering him about coaching at a baseball academy near Lexington, Kentucky, for 13- and 14-year-olds.

In the summer of 2008, Shaffar finally obliged, and one of his first pupils was a skinny, undersized kid named Walker Buehler -- now the rising star in the Los Angeles Dodgers' rotation, the one who will start Game 3 of the National League Championship Series on Monday.

Shaffar worked with Buehler leading up to high school. When arm issues caused mechanical inconsistencies shortly thereafter, Shaffar jumped in again, helping Buehler with his posture and balance. He eventually became his high school pitching coach, all while growing into something of a mentor.

By the end of Buehler's sophomore year, it had become apparent to Shaffar that Buehler would become a good Division I pitcher who might someday get drafted. By the end of his junior year, it was clear that Buehler would be selected by a major league team out of high school. By the end of his senior year, Shaffar believed Buehler could someday sit in the mid-90s and carve out a long big league career if he could just grow into his frame.

"The one thing I didn't see coming," Shaffar said, "was what you see today."

What the world will see in his matchup against the Milwaukee Brewers, which begins at 7:39 p.m. ET, is a fastball that sits comfortably in the 96 to 97 mph range with unfair movement. Buehler can ride the four-seam fastball up in the strike zone, but he also can cut it away from righties and come back with a two-seamer away from lefties. He can shape the slider and the curveball in any way he pleases. And, just for fun, he can mix in a power changeup that usually comes in around 90 mph.

Buehler, only 24, emerged as another ace on a deep Dodgers staff in his second full season since Tommy John surgery, posting a 2.62 ERA, a 0.96 WHIP and a 4.08 strikeout-to-walk ratio in 137 innings. From the start of August to the end of September, Buehler sported a 1.75 ERA in 10 starts.

When the Dodgers needed to beat the Colorado Rockies to claim their sixth consecutive division title on the first day of October, Buehler gave them 6 scoreless innings.

"If it wasn't for Walker," Dodgers utilitymanEnrique Hernandezsaid, "we probably wouldn't be in this situation right now."

Buehler always had an athletic, dynamic, up-tempo delivery with a loose arm. What he lacked was the strength in his wiry frame to consistently generate velocities in the upper-90s. Spending a year recovering from Tommy John surgery -- a procedure that took place shortly after he became the 24th pick in the 2015 draft -- gave Buehler the opportunity to add the lower-body mass necessary to take his velocity to another level.

"He took the setback of Tommy John and was able to really build a lower half, and build an engine, that increased his velocity and also really afforded him the ability to repeat his delivery a lot better," said Scott Brown, Buehler's pitching coach at Vanderbilt. "He's one of those guys who had tremendous feel, so he was able to overcompensate, without being totally efficient all the time, and get results. But what you're seeing now is a guy who understands it and is able to move through it."

It isn't just the repertoire. It's the unwavering confidence that borders on arrogance and quickly became the stuff of legend, punctuated by the F-bomb he recently spilled into a hot mic in front of a large Dodger Stadium crowd. It's the ownership and the deep-level thinking he applies to his craft that Dodgers director of player development Brandon Gomes says is "on another level."

When Brown first arrived as Vanderbilt's pitching coach in the fall of 2012, Buehler questioned him about applying aggressive throwing programs in between starts.

"He challenged me," Brown said, "and it gave me a different perspective."

Coming off the 2017 season, Buehler wanted to incorporate a cutter to complement the slider he was beginning to throw slower and with more depth. The Dodgers weren't so sure about that; they wanted him to hone the assortment of pitches he already possessed.

"But he was convicted in learning this," Gomes said. "And I think it's very difficult to argue now -- his cutter is 94 and can certainly be dominant. He's always finding ways, always trying to figure out how he can elevate his game."

Gomes got his hands on Buehler when he had already made his way back from Tommy John surgery and was pitching in instructional league in the fall of 2016. Gomes provided Buehler with advice about adjustments he eventually would have to make -- softening the breaking ball, pitching around the zone, using his fastball early in counts -- but knew the changes wouldn't take place until he was finally challenged.

That came last September, when Buehler was called up to the major leagues and gave up eight runs, 11 hits and eight walks in a span of 9 innings.

Hernandez saw a man who went into the offseason "on a mission," but Buehler was more technical about his approach.

"The biggest thing for me was trying to understand how to simply throw balls that look like strikes and end up balls, and throw pitches that look like balls and end up strikes," Buehler said. "I think that's a huge thing at this level because those guys are so disciplined, and they've seen so many quality pitches in their career that you can't just beat them in the zone all the time."

During one of their first meetings of the year, Farhan Zaidi, the Dodgers' general manager, approached Buehler with a set goal for the 2018 season -- start a playoff game.

"It was lofty," Zaidi said, and the innings concern presented challenges.

The Dodgers wanted to limit Buehler's workload but never communicated a strict innings limit publicly. He compiled 98 of them in his first season removed from major elbow surgery and ideally wouldn't make more than, say, a 50 percent increase in 2018. So the Dodgers sent Buehler to Triple-A to begin the season and, between optional assignments and trips to the disabled list, limited him to one major league inning between June 9 and July 12.

But then Buehler started to pitch well, and the stuff continued to hold up, and the Dodgers kept winning, and it became clear that Buehler needed to be a prominent member of their rotation. He has compiled 158 innings for the season, and if things go the way the Dodgers hope, he won't stop anytime soon.

"That's why I think getting feedback from the player is so important," Zaidi said. "Watching the pitch characteristics and velocity, watching his mechanics, a lot of things that could be kind of leaders to potential injury -- he's checked out really well in all those dimensions."

Buehler struggled in the second inning of Game 3 in the NL Division Series, walking opposing pitcher Sean Newcomb before giving up a grand slam to Atlanta Braves phenom Ronald Acuna Jr. He admitted to "a little bit of nerves and anxiety" initially, but he settled down, pitching three consecutive scoreless innings to give his team a chance.

He impressed Dodgers ace Clayton Kershaw in his first appearance of spring training, when he struck out five of the seven Chicago Cubs batters he faced in a Cactus League game.

"There's a lot of guys that throw very hard in the minor leagues and have great curveballs," Kershaw said. "For him to excel as quickly as he did up here is a testament to him and his mindset and his ability and his competitiveness."
Report a correction or typo
Related topics:
sportsespnnational league championship seriespostseasonmlbwalker buehlerlos angeles dodgersnlcsplayoffs
Copyright © 2022 ESPN Internet Ventures. All rights reserved.
TOP STORIES
Authorities searching for suspect after chase ends in DTLA
Police capture murder suspect after large-scale search in NoHo
Rapper Drakeo the Ruler's family announces wrongful death lawsuit
Woman who raped 10-year-old as teen sentenced to juvenile facility
Family of man fatally shot by Tustin police files lawsuit against city
Gunman shot wounded man in head while victim was on phone with 911
Tioni Theus case: Teen found dead on side of 110 Freeway laid to rest
Show More
LA County COVID hospitalizations continue to decline
Man who sparked probe into Kobe Bryant crash photos speaks out
Boyle Heights school to host NFL's Play Football Family Festival
Free N95 masks arriving at pharmacies as early as Thursday
LAPD to cover funeral expenses for off-duty officer killed, chief says
More TOP STORIES News