What is wrong with Jonathan Quick, and can he turn it around? 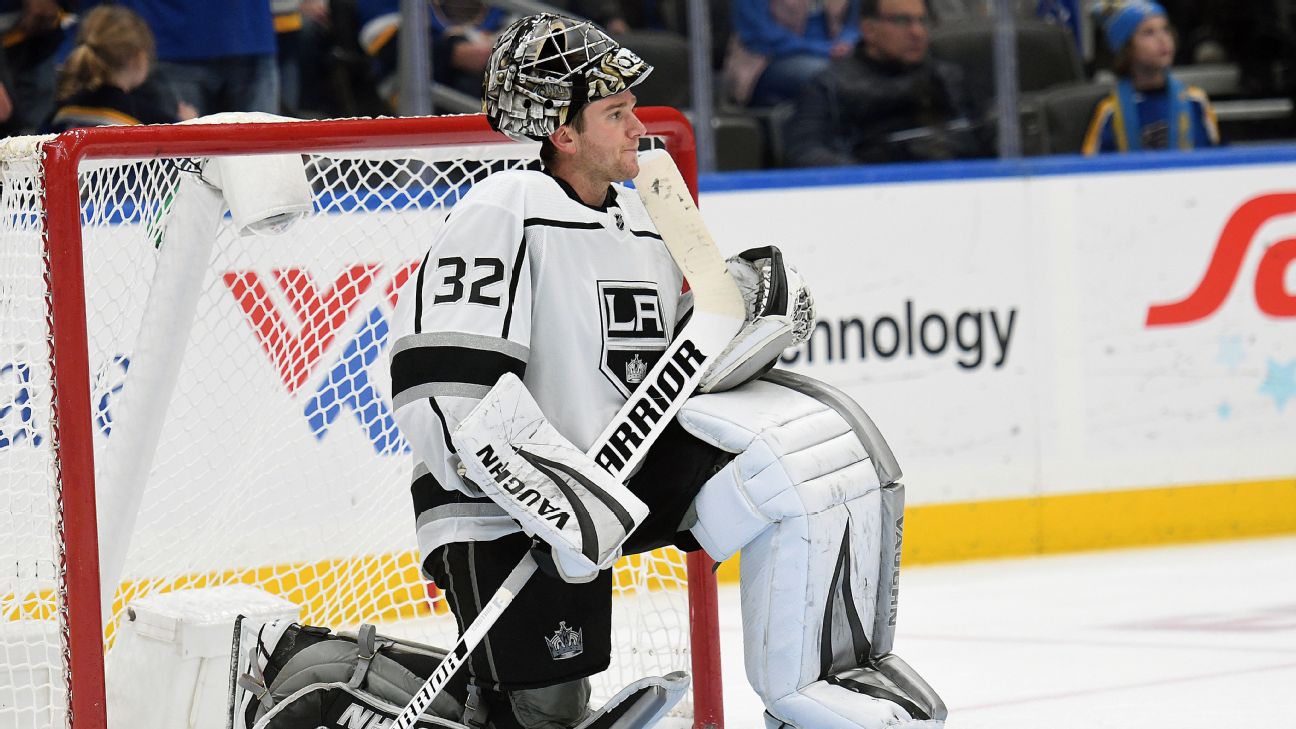 After seven games, Los Angeles Kings goalie Jonathan Quick -- a two-time Stanley Cup champion and former All-Star -- has a 2-5 record with a 4.48 goals-against average and .849 save percentage. Only Winnipeg's Laurent Brossoit has worse numbers among goalies with at least four starts. Yes, it is early, but Quick's numbers have only built on his save percentage of .888 in 46 games last season.

So what's wrong with the veteran backstopper, who posted a .921 save percentage just two seasons ago? From a distance, there are few simple answers.

Quick won those two championships and a Conn Smythe Trophy by being an aggressive and athletic goaltender. He's known throughout the NHL for his reaction speed. But in January, the Milford, Connecticut, native will be 34 years old, and it is easy to say Father Time has caught up to his style of play. And it surely doesn't help that he plays behind a team in salary cap hell as it pays for those past championships in an adjusted cap era. Los Angeles is stuck in the cellar of the Western Conference, and most around the league don't see the team escaping anytime soon.

I turned to my friends at Clear Sight Analytics, who consult and provide data to many teams around the NHL and the rest of the hockey world, and asked for a closer look at Quick's slow start to the campaign.

The first thing they looked at is a base stat for evaluating goaltenders. By their measurement, Quick should have given up 21 goals in his seven games this season. He has instead given up 31, and that minus-10 differential ranks dead last in the league.

That is eye-opening, but hope is not lost for Quick. Some of the issues that have led him here are fixable.

First, we are evaluating the goalie, but much of his performance is a product of the team in front of him. Are the Kings just giving up too many quality scoring opportunities?

According to Clear Sight Analytics, the Kings actually rank in the middle of the pack as a team in giving up high-quality shots, defined as those that go in the net more than 20% of the time. But the Kings rank last in the NHL in opponent shooting percentage in those chances, meaning teams are far too successful against the Kings in that department, given an average amount of high-quality chances.

The real problem is with medium-quality shots. On shots that go in between 9% and 19% of the time, the Kings allow the second-fewest opportunities but rank 30th in opponent shooting percentage. That screams goaltending problem.

Quick's signature move is a split across the ice to make the impossible save. We saw that against the Blues earlier this season. It's just one of the things that has made him so fun to watch for the past decade. He is aggressive moving out of the net and forcing the action. But this puts Quick in a bad position for second-chance shots or when the puck is moved across the slot.

The whole point of analytics is to put everyone in the best position to succeed. According to Clear Sight Analytics, passes across the front of the net increased by more than 1,100 last season. For a goalie like Quick, who challenges and overcommits to force the opponent to make a mistake, this trend will lead to a lot of goals against.

On the power play, teams moving the puck around with an extra skater can produce even more situations in which Quick might be caught out of position. So it's no surprise that he's given up nine power-play goals, the most in the NHL.

The style of play in the NHL has changed as well. It's now tougher for defensemen to clear players from the front of the net. Controlling the rebound and giving yourself time to track a puck through traffic are as important as ever. And if you're too far out of the net, you only decrease reaction time and increase rebound chances.

So what does Quick need to do to get back to being the goaltender we expect? In short, commit to finding a depth in his crease that gives him the best opportunity to make a save and be in position for a second-chance shot. He simply can't rely on athleticism and aggressiveness alone at this point in his career and in today's NHL.

In 2012, the Kings were the No. 8 seed in the West and somehow won the Stanley Cup on the back of Quick. While Cup dreams certainly seem a little far-fetched today, if the team in front of him maintains its start to this season and Quick raises his play to league average, there is no reason to believe the Kings cannot compete for a wild card. But to get there, the veteran has to alter his style.
Report a correction or typo
Related topics:
sportsespngoaliesnhljonathan quickfantasy nhllos angeles kings
Copyright © 2022 ESPN Internet Ventures. All rights reserved.
TOP STORIES
Gov. Newsom pardons woman who killed her pimp as a teen
1 wounded in South LA shooting involving LAPD
Abortion-rights supporters hold SoCal rallies over July 4 weekend
SF couple gets $1,500 fine for parking in their driveway
4th of July fireworks in Southern California: Where to watch
After cyclist death, Griffith Park temporarily closes road to cars
Villanueva's former top aide admits belonging to alleged deputy gang
Show More
UPS driver, 24, collapses, dies in SoCal heat
Uvalde school police chief resigns from city council
New Glassell Park restaurant at center of gentrification debate
14 suspects grab and run out with merchandise from Century City mall
California bid to create legal drug injection sites advances
More TOP STORIES News