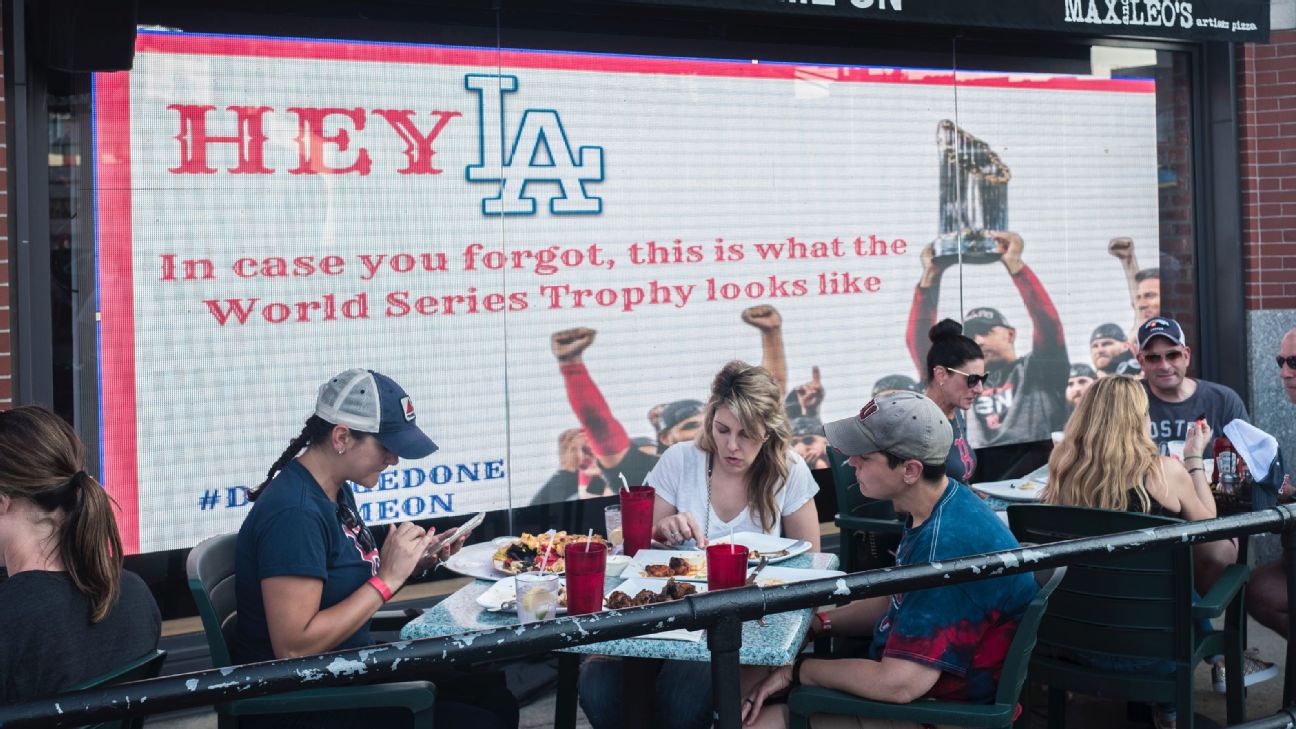 BOSTON -- It didn't take long to dredge up the memories of last October. On Friday, as the Dodgers returned to Fenway Park for the first time since losing the 2018 World Series to the Red Sox, Max & Leo's, a pizza restaurant located in Fenway Park, put up a sign facing those crossing the David Ortiz Bridge toward the ballpark. Its message? "Hey L.A., In case you forgot, this is what the World Series Trophy looks like."

Victory lap aside, the cross-country rivals find themselves in different positions from last season. The Dodgers occupy the same territory as the 2018 Red Sox, running away with their division while maintaining the best record in major league baseball. The defending World Series champions, meanwhile, sit in third place in the AL East, one game out of a wild card, chasing the Tampa Bay Rays and the Cleveland Indians.

"This is the team that everybody knows is the best team in baseball," Red Sox manager Alex Cora said of the Dodgers. "They are. If you look for motivation after the All-Star break, it's right there. From day one until the All-Star break, what they've been doing is amazing."

Saturday's trade for Andrew Cashner by Boston marked the official beginning of a playoff push as president of baseball operations Dave Dombrowski moves to shore up some areas of the roster. But not all improvements can come from the outside, as the front office intently monitors the payroll and manages any potential luxury tax penalties.

Boston will need to see improvements up and down the roster to put itself back at the forefront of the playoff picture. Here's the short list of what has to happen, in no particular order:

1. Andrew Cashner needs to solidify the No. 5 spot in the rotation

The Red Sox made clear that they were looking to upgrade their starting rotation in recent weeks and got their man in Cashner, trading away two 17-year old prospects, infielder Noelberth Romero and outfielder Elio Prado. Since Nathan Eovaldi hit the disabled list with loose bodies in his throwing arm, the Red Sox have depended on the likes of Hector Velazquez, Ryan Weber and others for innings, with a lack of consistency from the last spot in the rotation contributing to the overworked bullpen's workload. In 16 starts this season, the hodgepodge group of starters asked to fill out the rotation has amassed a 6.79 ERA in just 51 innings.

Similar to his pre-deadline deal last year for Eovaldi, Dombrowski landed a starter before the rush of the trade deadline, locking down his major trade acquisition two weeks ahead of July 31. Cashner will make his Red Sox debut on Tuesday against the Blue Jays. So far this season, the 32-year-old righty has posted a 3.83 ERA with a 1.19 WHIP, striking out 66 batters in 96 innings, posting a 9-3 record. Boston hopes for more of the same.

When Eovaldi returns to Boston, which Dombrowski expects to happen next week, he will return as the team's closer, a role the team refused to assign to anyone else coming out of spring training, channeling the 2003 Red Sox with a closer by committee. Following the departure of free agent Craig Kimbrel, Dombrowski decided to stay pat with the bullpen and not sign an established reliever, instead turning to the likes of Marcus Walden and Josh Taylor. Dombrowski views Eovaldi's return as equivalent to a major acquisition for Boston heading into the deadline.

"We are going to add Nathan Eovaldi," Dombrowski said on Saturday. "Some people seem to not grasp onto that. He's a big addition for us."

This, however, operates under the assumption that Eovaldi will stay healthy. Eovaldi, who signed a four-year, $68 million deal with Boston this past offseason, has undergone two Tommy John surgeries in his career and underwent a second surgery to remove loose bodies from his elbow in March 2018.

"We've always thought he could pitch in the pen," Dombrowski said. "A lot of people have felt that. When we signed him, he really was choosing to not do that because he had other organizations approach him and signed him as a starter. He changed himself with his time frame and said, 'I'm willing to do whatever you'd like. I'm happy to go to the bullpen and pitch.' We think he can be very helpful for us at the back end of our bullpen."

3. Chris Sale needs to get right

It has been an uncharacteristically down season for the Red Sox lefty. Sale signed a five-year, $145 million extension this offseason, but he hasn't won a game in Fenway Park since July 11 of last year, posting a 4.27 ERA and 1.14 WHIP in 46 innings at Fenway so far this season. That winless Fenway starts streak continued on Saturday, when Sale lasted just 4 innings, allowing five runs, seven hits and one walk while striking out seven against the Dodgers. His ERA of 4.04 far outpaces his career-high ERA of 3.41, posted back in 2015.

"I'm going out there every fifth day and getting my ass kicked," Sale said on Saturday after the loss to the Dodgers. "It's not fun. I'm still working, still grinding. I'm not going to give up, but it's tough going out there and being a liability to your team."

The Red Sox won the World Series without Chris Sale looking like Chris Sale for most of the postseason, when he posted a 5.76 ERA in 25 innings pitched. But Boston wouldn't have gotten there in the first place without his 2.11 ERA in 27 starts in 2018. Cora said it's the responsibility of the coaching staff to make sure Sale is clicking on all cylinders, which he hasn't all year. Sale, however, shifts the blame to himself.

"I'm trying to locate my fastball. That's the biggest thing," Sale said. "I've been throwing it all over the place. I've been trying to throw it in and it's going away. I'm trying to throw it away and I'm throwing cut fastballs right now and I have never done that in my life. All my hit by pitches this year have been on breaking balls on right-handed hitters. That can't happen. Shutdown innings, I haven't had a single one all year. I'm digging my team a hole they can't get out of early and they're doing everything they can."

Devers has been a revelation for Boston this season. He has laid claim to the No. 2 spot in the lineup behind Mookie Betts, has markedly improved his plate discipline and has made a leap defensively, dramatically improving his footwork following a rocky first month. The 22-year-old is hitting .327/.380/.557 with 17 homers, 64 RBIs and 26 doubles, and he has been one of the team's most consistent hitters this season.

As history has shown time and time again, one good half-season doesn't mean someone has officially arrived in the big leagues. Devers is still a young player, which often goes hand in hand with inconsistency. With offensive production drops from Betts andAndrew Benintendi, Devers has made up a lot of the slack, and the team will depend on him for big offensive production if the rest of the lineup remains at its current levels of production.

As boring as it may sound, the Alex Cora buzzword of the season has been "consistency," because Boston has been anything but. It's something Cora constantly brings up in his news conferences, a near-daily reminder that his team hasn't been what it was just a calendar year ago. Just as frequently, Cora mentions that he believes his team can emerge from its yearlong funk.

"We're very talented. That's the bottom line," Cora said on Friday. "We can play a lot better and everybody knows it. I think that was the coolest thing in the All-Star Game how many people in that clubhouse still believe in us. I don't know if they like it or not, but they let us know how good we are. If we forgot about that, the three guys that were there and the coaching staff, the players reminded us."

Those reminders will need to turn into production soon if Boston hopes to even have a chance to defend its World Series title. 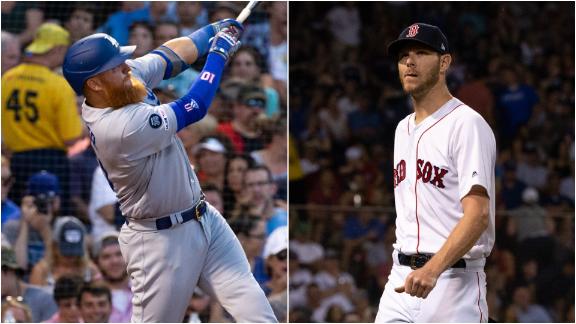