Why the L.A. Sparks put Derek Fisher on a coaching 'list of one' 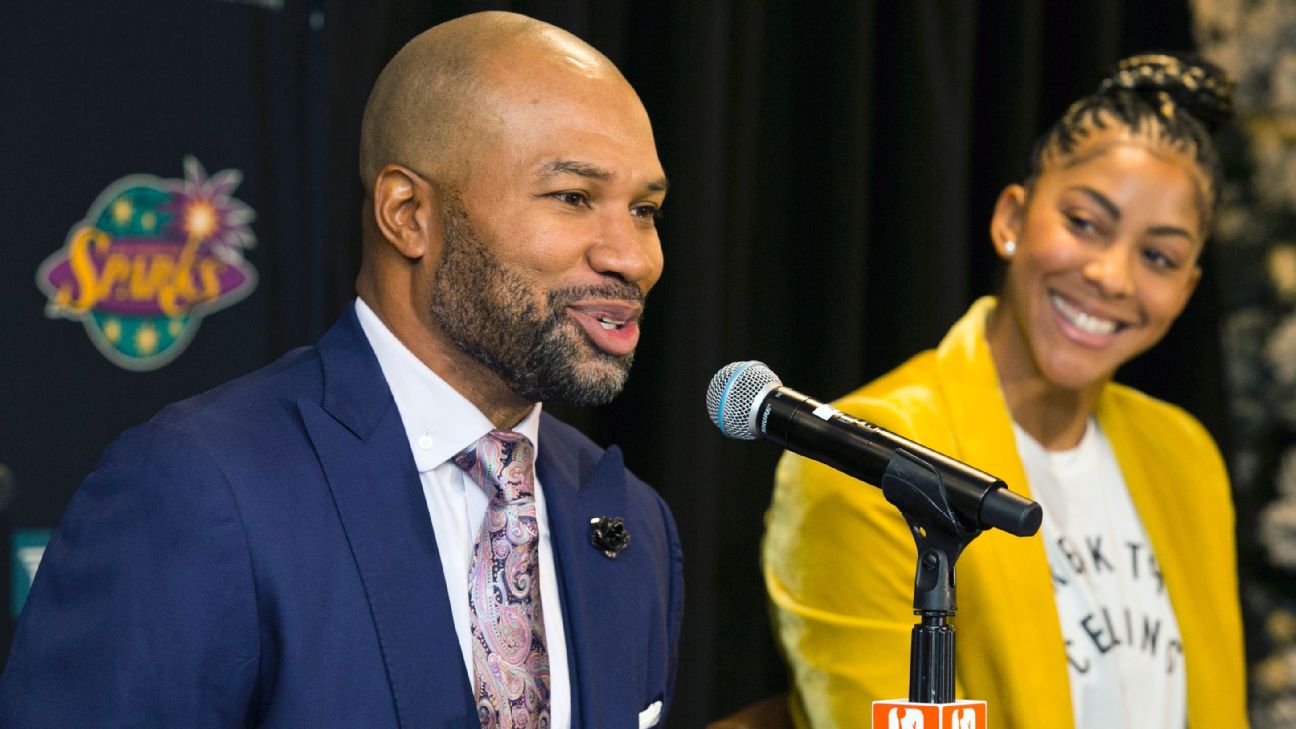 Derek Fisher could end up being a successful coach with the Los Angeles Sparks. He could help star Candace Parker, who has known him a long time and appeared pleased Friday at Fisher's official introduction, add to the one WNBA championship ring she has. Fisher talked about his coaching philosophy at length, and said how excited he was about the opportunity. This could all work out. But ...

The track record for former NBA players as WNBA coaches is not very good, with some notable exceptions, which we'll get to in a moment. But what stood out most from Friday's news conference were the answers Sparks general manager Penny Toler gave about previous coach Brian Agler and the hiring "process" for Fisher.

In speaking to espnW last week about his departure, Agler had said he just felt like it was the right time. Why? Well, that became pretty clear Friday. Toler talked of having had several conversations with Fisher during her 20 years as GM, and how she'd often "teased" him to "come be the coach."

It all suggested a rather odd scenario: Toler apparently considered Agler's departure no great loss -- even though he led the Sparks to the 2016 WNBA title and received a contract extension in 2017. Asked about Agler's reason for leaving, Toler said she had no idea because she didn't ask him.

"When somebody wants to resign, it's not my job to talk them out of it," she said. "We only want people that want to be here. If you don't want to be here, I'm never going to close that door. I'm going to open it and let you walk out. I truly believe in L.A. we can build whatever we want to build here -- we don't have to beg anybody to stay. Now, we have to tell some people not to come, but ...

"I'm a GM; I'm always prepared for the 'what if?' So I went into motion. I always wanted to work with this guy right here [gesturing to Fisher], so let me run over there and get him."

Toler encouraged Fisher to talk with the Sparks players this summer to motivate them through some of their difficulties in a 19-15 season in which they lost in the second round of the playoffs. It's likely Agler at some point had wondered if he was on the verge of being replaced, and decided to leave instead.

Agler resigned on Nov. 1, but the Sparks didn't announce it until Nov. 30, saying then a "comprehensive search would start immediately" for the new coach. Yet, a week later, Toler said Fisher was the only candidate who was considered.

"I can tell you it was a very short list. A short list of one," Toler said. "Matter of fact, people were asking me, 'Penny, what's the backup?' I don't have a backup. In this case, I'm going to close Plan A."

Toler extolled Fisher's support of the Sparks during and after his 18-year NBA playing career, much of which was spent in L.A. She also praised his championship experience, referencing his five titles as a Lakers player.

As for his 1 seasons as coach of the NBA's New York Knicks -- his only previous coaching experience -- going badly with a 40-96 record from 2014 to '16, Toler said that not only wasn't a deterrent to him getting the Sparks' job -- it was actually "the main reason we're hiring him."

Toler then said she was repeating what she had told a friend at dinner Thursday who asked about the Knicks situation.

"I told my friend that in great adversity, it doesn't break people; it makes us stronger," Toler said. "And I went on to say to my friend, 'And I know he's stronger for it, because before I could get that John Hancock on that contract, he asked me about 2,000 questions.' "

It may seem like great news to coaching hopefuls everywhere that a .294 winning percentage at a previous job would be considered a potential strength. But that's probably not the case at most places. Apparently, it was with the Sparks management. Or it was just something they decided to overlook because they were so convinced Fisher was the right person for the job that they didn't consider interviewing anyone else.

Of course, even though the Sparks have not been affiliated with the Lakers since 2006, they are owned by a group including former Lakers great Magic Johnson. So Fisher's strong Lakers connection obviously helped.

Toler also said she was sure that Fisher did not take the Sparks job just as a stepping stone to get back into NBA coaching later. Fisher said the same thing.

"I guess I was hungry to get back to competing again. But every opportunity isn't the right opportunity. Over the last couple of years, I've had multiple conversations with teams at the collegiate level, with professional teams on the men's side. And timing, opportunity -- what their needs were and my needs were -- they didn't align. This did. So I'm excited to be here for those reasons."

Longtime WNBA followers may be skeptical, though. In the league's 22 seasons, there have been 16 other former NBA players who've gotten WNBA head-coaching jobs. Only four of them lasted at least three full seasons in the WNBA. Three of those won championships: Bill Laimbeer, Michael Cooper and Corey Gaines.

Laimbeer is the former NBA player with the most success as a WNBA coach; he won three titles with the Detroit Shock. He also has coached the New York Liberty and is now with the Las Vegas Aces. Laimbeer's career record in the WNBA is 243-191 in the regular season and 30-20 in the playoffs.

Cooper had two stints with the Sparks and one with the Atlanta Dream. He had a 230-158 mark in the regular season and 26-16 record in the playoffs, winning two titles with the Sparks.

Gaines was an assistant to Paul Westhead (an NBA coaching import, although he never played in that league) with the Phoenix Mercury, and won one title in that role and then another as the Mercury's head coach. Gaines' regular-season record while in charge was 90-101, and 11-9 in the playoffs. Brian Winters didn't win a title with the Indiana Fever, but he went 78-58 and 5-7 in his four seasons in the WNBA.

All four eventually went to (or back to) NBA coaching, although Laimbeer and Cooper then returned to the WNBA. The other 12 former NBA players who coached in the WNBA each lasted about two seasons or fewer. Kobe Bryant's father, Joe Bryant, coached one full season with the Sparks and parts of two others.

The Sparks, in fact, lead the way in terms of giving former NBA players a chance to coach in the WNBA. Along with Cooper and Joe Bryant, the Sparks have been coached by Orlando Woolridge and Henry Bibby, who had the shortest tenue with them (29 games before being replaced by Bryant in the 2005 season).

On Friday, though, Fisher, Toler and Parker all looked happy. Asked about whether the Sparks should have at least considered a female candidate, Toler said, "The GM's a woman. I don't look at coaching as man or woman; I look at who's the best person for a job; who is going to have the best chemistry with the team.

"The world is finally catching up to what my philosophy is and what our organization stands for ... understanding that a Becky Hammon can coach a men's team. A Kristi Toliver, a Candace Parker. I truly think I can go over there and be the GM of a couple of these teams and win them a championship. I'm hiring the best coach."