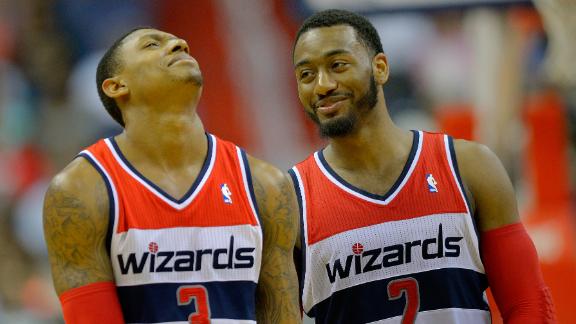 USA Basketball has scheduled a Tuesday 2 p.m. ET teleconference with chairman Jerry Colangelo and coach Mike Krzyzewski to comment on the finalists.

The three cuts reduced the overall number of players vying for the 12-man World Cup team to 16 entering next week's resumption of practices in Chicago.

After the devastating leg injury suffered Friday night by Indiana's Paul George, there are only five players among the final 16 who are widely regarded as shoo-ins for the plane that leaves for Spain on Aug. 23: Oklahoma City's Kevin Durant, Houston's James Harden, New Orleans' Anthony Davis, Chicago's Derrick Rose and Golden State's Stephen Curry.

ESPN.com reported earlier Monday that every player who participated in camp last week in Las Vegas had committed to keeping his name in the hat for one of the final 12 roster spots despite suggestions that the scary nature of George's injury could dissuade some teammates from playing on.

"The ending to our Las Vegas training camp with the injury to Paul George was very emotional for everyone involved in USA Basketball," Colangelo said in a statement. "I very much appreciate the outpouring of support Paul and USA Basketball has received the past couple of days from the basketball world.

"... Paul's injury was an extremely unfortunate occurrence; it was truly a freak accident. We're all very pleased that his recovery is going well."

Although there is undoubtedly heightened concern within the group after watching George suffer a horrendous compound leg fracture in Friday night's intrasquad scrimmage, sources told ESPN.com that various Team USA players have talked among themselves about the need to stay together, with showing support for George ranking as one of their primary motivations.

"No one is pulling out," said one source.

Added a general manager who has a player on the Team USA squad: "No one on this team wants to walk away, because that would seem unfair to Paul. If there is any fallout from this injury, it may not be felt until the next time invites [for Team USA] go out."

Krzyzewski and Colangelo initially planned to make their first round of cuts on the morning after Friday's scrimmage. With the team scheduled to reconvene in Chicago on Aug. 13, USAB officials decided to keep 16 of their 19 available senior players -- one or two more than usual -- heading into the 10 remaining days of scheduled preparation on U.S. soil before leaving for Europe.

"I've never been in a situation like that where someone goes down that hard," Team USA assistant and Syracuse coach Jim Boeheim told ESPN Radio's "Mike & Mike" on Monday morning. "This is a very, very difficult thing. It's not something where you can just say, 'Oh, yeah, we're gonna get back together and go.'

On the eve of the inaugural FIBA Basketball World Cup, which opens Aug. 30, Colangelo must submit an official roster of 12 players. The United States are favorites to repeat as world champions despite the fact that host Spain has its usual strong team and even after the losses of George and forwards Kevin Love and Blake Griffin, who withdrew from consideration before camp started in Vegas. Love pulled out because of his ongoing trade limbo with the Minnesota Timberwolves; Griffin is still recovering from a back injury.

George, meanwhile, had surgery in the early hours of Saturday morning and is expected to miss the entire 2014-15 season. The Pacers' franchise player is scheduled to be released from the hospital Monday and then likely to travel to Indianapolis for further evaluation.

Colangelo and Krzyzewski acknowledged in the immediate aftermath of George's misfortune that the whole program would need additional time to cope with emotional aspect of losing the popular George in such fashion. It's the first season-ending injury suffered by an NBA player representing the United States since the original Dream Team was ushered in for the 1992 Olympics.

On his own "Basketball and Beyond with Coach K" Sirius Radio show Monday night, Krzyzewski said: "Just a horrible injury to a great player and a great young man. ... You're making a hustle play and [then] you land and all of a sudden your leg is broken.

"I thought the way he handled things and the way our medical staff handled things was just superb. Paul was just stoic. He was just unbelievable while he was being cared for on the court. Our trainers and doctors came to his immediate aid. His parents were there and even in the hospital before his operation, he was upbeat [and] positive. When we visited him [the day after], he said, 'Coach, I'm gonna be fine, go for the gold.' He was trying to reassure everybody. Amazing for that young man to handle things in the way he did."

As for whether the serious nature of the injury could dissuade pros from playing for Team USA in the future, Krzyzewski said: "I really think it's still always an individual decision by a player and players want to do great things. They want to be involved with great competition and many of them want to be representatives of their country and I don't think that's going to change.

"Great players want to play. Every precaution was taken ... and sometimes injuries happen and that's part of the game. I really believe that the players will still want to play and will want to serve their country and get better and be a part of an experience that only a few get a chance to be a part of. Hopefully that's the same way ownership will look at it as we go forward with this.

"Injuries can take place at any time, whether they're on or off the court. What you try to do when you're in the environment for USA Basketball is to give them the best training and best protection they can have. And that's what they've had. That's why we haven't had the injuries. We haven't had a serious injury until this one.

"The other thing about that is that my feeling is when you're playing against really good players and high level competition and you're training, I think you have less of a chance to get hurt. There's always the chance, there's always the chance. Anything can happen. But I still do not think that will stop the players from wanting to play USA Basketball, because it's the right thing to do."