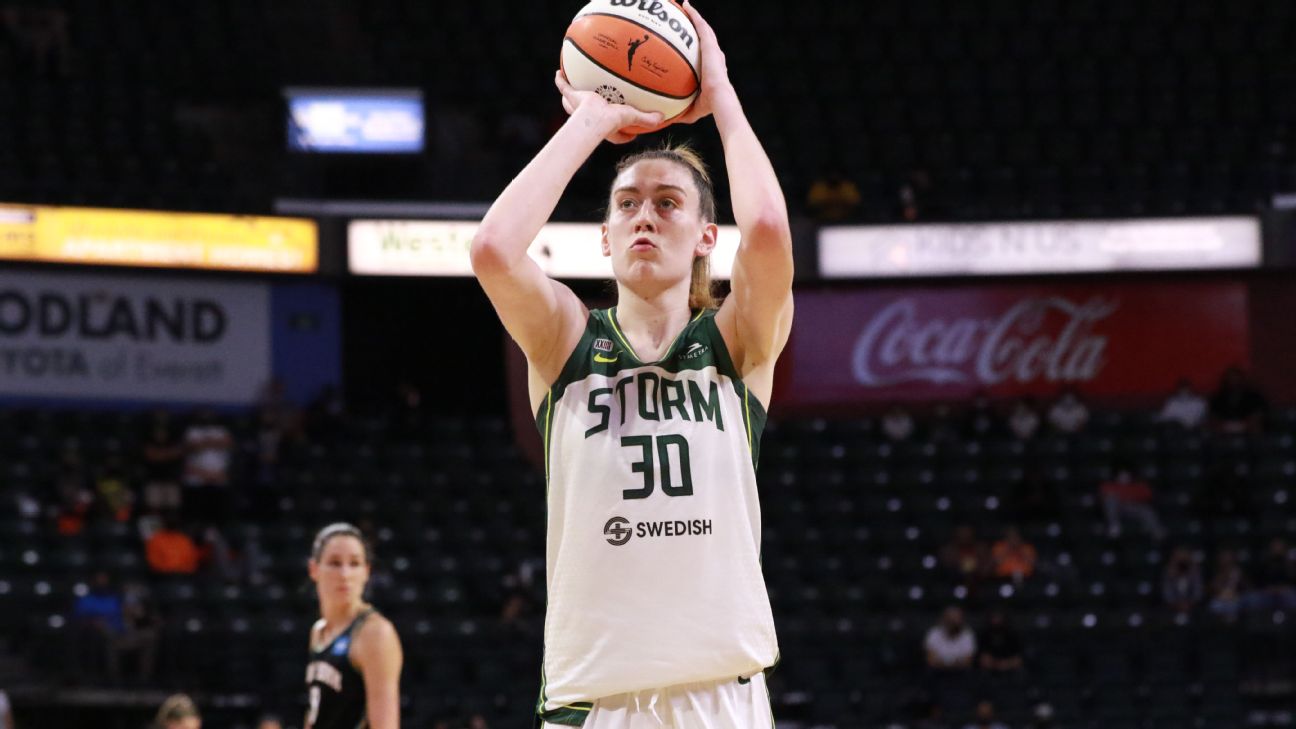 Playoff spots are filling up fast. That said, the decision on which teams get the final spots may come down to the last games of the 2021 WNBA regular season.

Three more teams secured playoff berths this week: The Phoenix Mercury nabbed theirs on Aug. 31 with a home win over the Chicago Sky. On Sept. 2, the Minnesota Lynx clinched their 11th straight appearance in the postseason. Meanwhile, the Sky took down the No. 2-ranked Las Vegas Aces on Sunday to become the sixth team bound for the postseason.


As the remaining six teams rush to capture the last two spots in the playoffs, we're turning our attention to individual standouts. We've picked an MVP from each team -- like the Seattle Storm's Breanna Stewart, who dropped 33 points against the New York Liberty on Thursday -- as well as players who have to step up their game in this final two-week stretch -- like the Atlanta Dream's Tiffany Hayes, who helped her team to an unexpected win against the Dallas Wings on Sunday -- whether in their scoring abilities or team leadership. We're calling them the impact-makers.

The Sun continue to be the brightest-shining team in the WNBA. They're on a nine-game winning streak, even though they only played once in the past week. Connecticut now has three games on the road, including one against a surging Phoenix Mercury that will test the consistency of its defense.

Team MVP: Jonquel Jones (20.3 PPG, 11.0 RPG, 2.7 APG, 1.4 SPG, 1.1 BPG) is also a frontrunner for league MVP. The stuffing of the stat sheet shows how talented she is. Whether she's posting up or shooting from 3-point range, the forward has been key to the Sun's championship hopes this season.

Impact-makers: DeWanna Bonner (15.8 PPG, 6.9 RPG) may have only joined the team in 2020, but her WNBA championship experience -- she won two titles with Phoenix -- is key. Meanwhile, Brionna Jones (14.8 PPG, 7.3 RPG) is having a successful season playing a bigger role in the absence of Alyssa Thomas.

The Aces have such a stacked starting lineup, with each player averaging double-digit points per game, it's no shock that they have the best offensive rating (105.8) in the league. The Aces also have the second-best defensive rating (95.9), thanks to 2020 Sixth Woman of the Year Dearica Hamby.

In their loss to the Chicago Sky on Sunday, the Aces played from behind for most of the game, clearly missing Hamby (ankle) and Liz Cambage, who's currently in COVID-19 protocols. Which seems to have exposed a weakness -- something they have to watch closely when they host Minnesota on Wednesday (9 p.m. ET, ESPN2) for their single game this week.

Team MVP: A'ja Wilson, the 2020 WNBA MVP, has been playing like she's ready to win the award yet again. She's clearly Las Vegas' leader on both ends of the floor, leading the team in points (18.6) and rebounds (9.4) per game.

Impact-makers: Wilson and Cambage are an All-Star duo for a reason. It's unclear when Cambage (14.7 PPG, 8.4 RPG) will be cleared to play again, but without her, the Aces cannot go far in the playoffs.

Earlier this week, with their fifth straight win, the Lynx clinched their 11th straight playoffs berth -- the longest active streak in the league.

Team MVP: No player has won MVP and Defensive Player of the Year in the same season since 2007, though it happened five times before that year. Sylvia Fowles, who recently became the first player in WNBA history to record at least 20 points, 20 rebounds, three steals and three blocks in a single game, is making a case to become the sixth. The 2017 MVP is part of every offensive and defensive play the Lynx make and ranks 10th in scoring (16.4 PPG), third in rebounds (10.1 RPG) and second in blocks (1.8 BPG).

Impact-makers: Any of Fowles' teammates can have a breakout night, but Layshia Clarendon has been key since she joined Minnesota in June. In 20 games, Clarendon has averaged 10.5 points, 5.7 assists and 3.3 rebounds, and has the ability to command the outcome of each matchup.

After winning the Commissioner's Cup in August, the defending WNBA champions went 2-5 and spiraled through a three-game losing streak. To break that streak, Breanna Stewart had to drop 33 points in one of her best performances of the season to win against a struggling New York Liberty.


Team MVP: Stewart is certainly the MVP of this team, averaging double-digit points per game this season. She simply impacts the game in irreplaceable ways, and is one of the best players in the league's history, averaging 20.7 PPG and 9.8 RPG.

Impact-makers:Outside of Stewart, Jewell Loyd and Sue Bird, Mercedes Russell is crucial to securing second-chance points and making sure Stewart and Loyd get the ball.

The Mercury have been unstoppable lately, winning their last eight games and clinching a playoff berth thanks to a victory against Chicago and losses by both Los Angeles and New York. Phoenix plays its final three games of the regular season against Connecticut, Las Vegas and Seattle, an opportunity to prove it has a legitimate chance to win a record-tying fourth WNBA championship.

Team MVP: Brittney Griner's league MVP-worthy season (20.7 PPG and 9.4 RPG) stands out among the team's Big 3 -- which also includes Skylar Diggins-Smith and Diana Taurasi. Griner left the WNBA bubble last August to focus on her mental health, and came back in 2021 to play some of the most consistent basketball of her career.

Impact-makers: The Mercury will be relying on Diggins-Smith going into the playoffs. Since the break, she has averaged 18.9 PPG, 5.5 APG and 1.5 SPG.

The Sky lost two in a row before a must-needed win against the Aces clinched them a playoff berth. Three players not named Candace Parker, who had an off night, scored in double-digits.

Team MVP: Parker (13.4 PPG, 8.8 RPG, 3.9 APG) is the face of the Sky. Without the 13-year veteran on the court, Chicago is missing its biggest playmaker on any side of the ball, and the team leader in the locker room.

Impact-makers: Kahleah Copper leads the team with 14.8 PPG, while Courtney Vandersloot leads the team -- and the league -- with 9.0 APG. But Diamond DeShields is also an X factor coming off the bench for Chicago. The guard has bounced back from an injury-laden 2020 to average 10.8 PPG, 3.4 RPG and 2.3 APG.

The Wings have won just three of their last seven games, and dropped what could have been deemed a must-win game against the Atlanta Dream on Sunday. Their final four games come against two teams already in the playoffs, and two teams hunting for the final playoff berth.

Impact-makers: Even though she has only started seven of the 28 games she has played in, Marina Mabrey has had a solid season, averaging a career-high 12.8 PPG. The team's second-highest scorer, she needs to keep it up if the Wings want to make it to the postseason.

The Mystics have only moved up the rankings because other teams struggled. Plus, Tina Charles is back after a hip injury, and there's a strong chance former league MVP Elena Delle Donne will be available for the final games of the regular season.

Team MVP: Charles has put together an unbelievable season to carry an injury-plagued team, averaging a career-high 24.8 PPG and 9.6 RPG. The league's leading scorer, she has put together an MVP campaign that is hard to deny. The Mystics went 2-2 while she was out with a hip injury,


Impact-makers: With Delle Donne's health not at 100%, other Washington players have stepped up as the regular season comes to a close. Much of the responsibility has landed on Natasha Cloud: even though she has averaged just 7.7 PPG this season -- the second-lowest of her career -- it's evident how much in-sync the team is when she's at her most aggressive, on defense and offense.

The Liberty are just one game ahead of the Mystics for a playoff spot, and face them in their regular-season finale. Before that, though, they're looking to break their six-game losing streak when they play Dallas in the upcoming week. With that their only matchup this week, they must practice holding onto the ball better: They turn over the ball a league-high 16.9 times per game.

Team MVP: New York has been one of the best 3-point shooting teams all season, thanks to Betnijah Laney. Even as the Liberty struggled, Laney has played consistently all season: She leads the team with 17.2 PPG 17.2 and is second with 5.0 APG. The 2020 Most Improved Player, she could win the award again this year.

Impact-makers: Natasha Howard has started in all 10 games she has played in since returning from an MCL sprain, and has become the team's second-highest scorer (14.5 PPG) and leader in rebounds (6.5 RPG). With Laney and Howard at their best offensively, the Liberty may be able to end their losing streak and hold onto their playoff spot.

The Sparks have struggled to overcome the losses they sustained before the Olympic break, even with Nneka Ogwumike and Kristi Toliver returning from injuries. With a constantly changing lineup messing with the overall team chemistry since the season resumed, they have averaged just 66.0 PPG in their last five games -- all of them losses.

Team MVP: If the Sparks are able to make it to the playoffs, it will be because of Ogwumike. Even though she has only played in 14 games this season, she leads the team in scoring (14.2 PPG) and rebounding (5.9 RPG).

Impact-makers: Erica Wheeler has quietly been putting together a very successful season, averaging 13.5 PPG and a team-leading 4.8 APG. She and Ogwumike will have to shine in their games at home this week, against two strong teams.

Though the Dream are not statistically eliminated from the playoffs, they are three games back from the eighth spot, and have only won one of their last 10.

Team MVP: Courtney Williams was named to her first WNBA All-Star game this season, and has been thrilling to watch leading the Dream offensively. She's averaging a team and career-high 16.3 PPG, in addition to 6.4 RPG and 4.2 APG.

Impact-makers: Tiffany Hayes has been battling a knee injury all season, but in the 15 games she has played, she has become Atlanta's second-highest scorer (13.8 PPG) and has cemented her role in helping the team build around Williams.

This week: PHO, @WAS

Like Atlanta, the Fever are not statistically eliminated from the playoffs yet. And, even though they have the worst record in the league, they have won five of their last 10 games.

Team MVP: Kelsey Mitchell (16.7 PPG) has had a strong offensive season, despite Indiana winning only six games in 2021. When the offense runs through her, the team is at its best in terms of ball movement. With Mitchell leading the team, Indiana has someone to build around for the future.

Impact-makers: Teaira McCowan is averaging career highs in points (11.1) and rebounds (9.3). Her presence under the basket, specifically on defense, is something to pair with Mitchell's offense.