Wolverines AD: 'We have to learn' 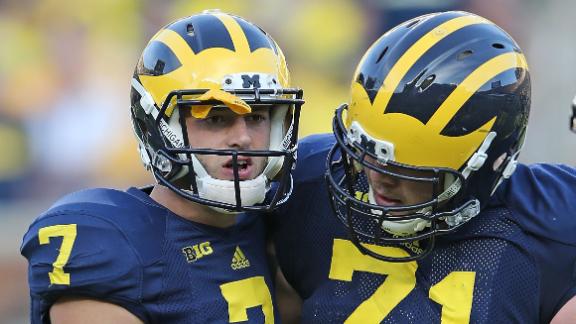 Brandon released a statement shortly before 1 a.m. ET Tuesday outlining a two-day investigation he conducted into how Michigan's football medical personnel and its coaching staff handled a "probable mild concussion" for its sophomore quarterback.

"Unfortunately, this confusion created a circumstance that was not in the best interest of one of our student-athletes," Brandon said. "I sincerely apologize for the mistakes that were made. We have to learn from this situation, and moving forward, we will make important changes so we can fully live up to our shared goal of putting student-athlete safety first."

Morris remained on the field for one play of Saturday's 30-14 loss to Minnesota after displaying concussion symptoms in the fourth quarter. The sophomore stumbled and needed the help of his teammates to stay on his feet after a helmet-to-helmet hit knocked him to the ground.

Coach Brady Hoke and offensive coordinator Doug Nussmeier both said they were looking elsewhere on the field at the time of the hit and saw only its aftermath. Hoke said Morris told him his stumble was the result of an earlier injury to his ankle, not the blow to his head.

Brandon's statement said the team neurologist noticed the symptoms of a concussion and made his way down the sideline to check Morris' health. Morris remained in the game for one play before he was pulled to the sideline. He returned to the field for one additional play later in that drive despite not being cleared for action by the medical staff.

"Shane left the bench when he heard his name called and went back into the game," Brandon said. "Under these circumstances, a player should not be allowed to re-enter the game before being cleared by the team physician. This clearly identifies the need for improvements in our sideline and communications processes."

Hoke declined to talk about injuries on Tuesday's Big Ten conference call, saying only "we'll see" when asked about Morris' availability for Saturday's game at Rutgers.

Morris, meanwhile, took to Twitter on Tuesday to address the situation:

Brandon's statement said Michigan plans to keep a medical professional in the press box to help communicate injury protocol to all necessary parties. It also said the university would seek ways for the coaches and training staff to remain on the same page on the sideline.

On Monday afternoon, Hoke said he didn't think there would be any changes to the protocol for checking head injuries. He also said that, to the best of his knowledge, Morris did not have a concussion. He believed Morris would have been available to practice with the team Sunday night if not for a high ankle sprain.

"We would never, ever put a guy on the field when there is a possibility of head trauma," Hoke said. "We won't do that."

Brandon said the breakdown in communication between the coach and himself that led to extended confusion during the past 48 hours also needs to be addressed. The botched operation comes at a poor time for Hoke and Brandon, who have been criticized for their job performance in the past few weeks.

Hoke, Brandon's choice to be the program's coach, is 28-16 midway through his fourth season in Ann Arbor. Hoke said Monday afternoon that he had not yet spoken with Brandon about the injury.

He said Monday he understands the criticism about his team's performance on the field but not the questions about his integrity and care for his players.

"When your integrity and your character is attacked, I think that's really unwarranted," he said.

Communication Breakdown At Michigan
Brad Edwards and Joey Galloway react to Michigan athletic director Dave Brandon's comments that the Wolverines football made mistakes because of a serious lack of communication while dealing with QB Shane Morris' head injury.

Shane Morris Incident Casts Cloud Over Michigan
ESPN Michigan and Big Ten reporter Dan Murphy explains the latest with the reeling Michigan Wolverines, and the program's reaction to Shane Morris being reinserted into the game following a helmet-to-helmet hit.