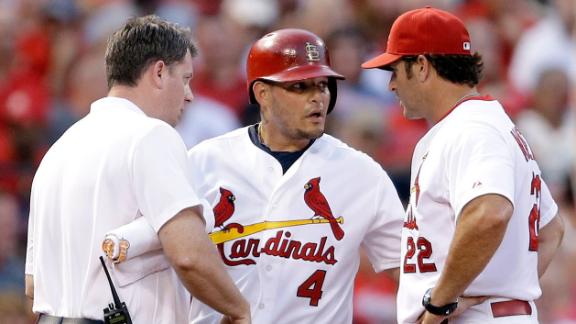 St. Louis Cardinals All-Star catcher Yadier Molina has a torn ligament in his right thumb and will have surgery Friday, the team announced.

Molina, who could miss eight to 12 weeks, was injured when he planted his hand for balance after sliding feet-first into third base in the second inning of Wednesday's 5-2 victory over the Pittsburgh Pirates.

He caught another half-inning before he was taken out for a pinch hitter in the third inning, and he had an MRI on Wednesday night.

"I almost cried," Molina said before Thursday night's game against the Pirates. "Mentally, it's so frustrating. You play hard for something to happen like that, it's bad."

Molina said it would take five weeks for the thumb to heal after surgery and then he'd begin a rehab program.

Manager Mike Matheny said it's important for the players to just keep going.

"I'm going to continue to scream at the top of my lungs that this is an opportunity for us to step up, all of us," Matheny said. "The great players, the great teams, take this stuff and figure out a way to get it done."

Molina was voted to his sixth straight NL All-Star team Sunday and is a starter for the fourth time. There was no immediate word on his replacement. Molina was hitting .287 with seven homers and 30 RBIs.

Molina To Miss 8-12 Weeks
ESPN's Dallas Braden breaks down the impact Yadier Molina's injury will have on the Cardinals.

Cardinals Top Pirates
Kolten Wong hit a home run for the second game in a row to help the Cardinals beat the Pirates 5-2.