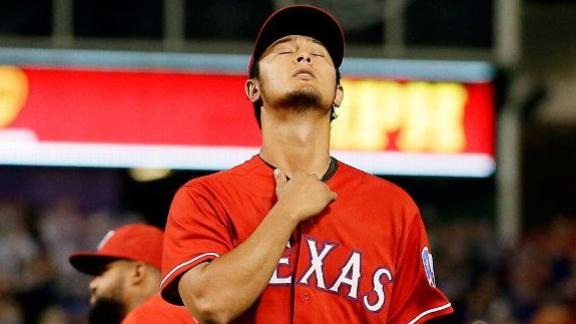 Texas Rangers ace Yu Darvish was scratched from his scheduled start Tuesday in Minnesota because of neck stiffness.

Darvish told the team about the stiffness after waking up late Tuesday morning. He received treatment and reported some improvement, according to club officials, but is still experiencing some stiffness.

Scott Baker will start against his former team in Darvish's place. Baker gave up six runs on eight hits in six innings in a 7-2 loss to Detroit on Friday. He was then moved to the bullpen as the long man with Joe Saunders taking his place in the rotation. Baker will now get the call on short rest.

Darvish will have a precautionary MRI later Tuesday in Minneapolis, and it is not known when he will make his next start. Darvish indicated to the team that the symptoms are similar to what he felt in mid-March during spring training, which forced him to the disabled list to start the season.

He made his first start April 6 and hadn't missed one until Tuesday night.

Darvish, 27, was the runner-up in the American League Cy Young balloting in 2013 and has started this season well. He is 4-2 with a 2.35 ERA in nine starts. He is fourth in the AL in ERA and seventh in strikeouts (71).

The injuries continue to mount for the Rangers as the Darvish news comes on the same day Prince Fielder had spinal fusion surgery in Dallas. The Rangers have had 17 disabled list stints this season, the most in the majors.