Zlatan Ibrahimovic, the ageless striker, on being hated and what comes next: 'I'm a little bit pa... 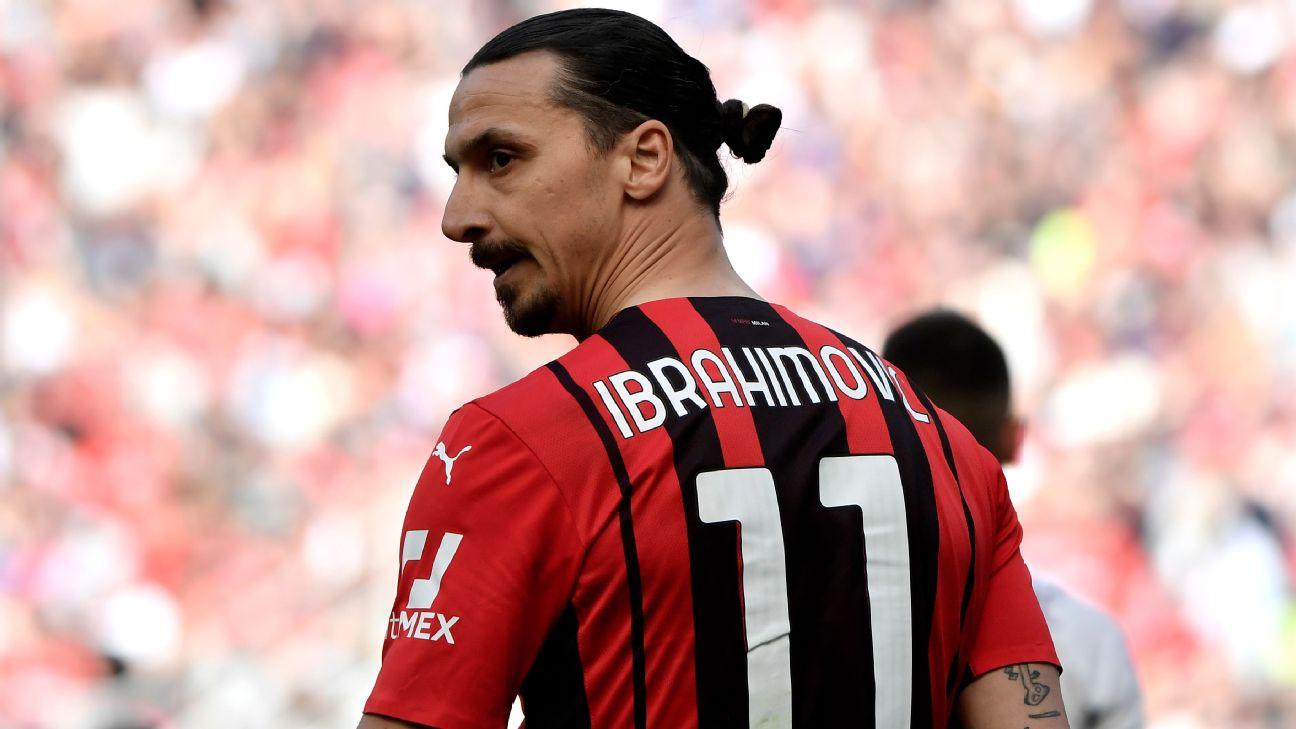 Fear is not a word you associate with Zlatan Ibrahimovic. Not unless you happen to be a defender marking him in the box.

But the Zlatan who joined me and Julien Laurens on the latest episode of Gab and Juls Meetshas no problem saying he's "a little bit scared" and "a little bit panicking" at what comes next. (Don't worry, during the interview he also says "You can call me God," which reassures you that you are indeed speaking to Zlatan and not some Millennial doppelganger.)


"I'm in a situation now where I'm close to the goal line ... so I'm a little bit panicking," the 40-year-old AC Milan striker told ESPN. "Because when it stops, what do you do? I know I can do a lot of things, I will have offers from all over the place. But the adrenaline I get on the field, I will never get that [from] something else."

Most athletes have to stare down the realisation that the greatest rush they will ever get will come to them before most of their peers' lives are even at the halfway mark. In some ways, those who fall out of love with the game or who don't have a choice as to when they hang up their boots are fortunate. Most, like Zlatan, struggle with the decision of when to call it a day. Forever.

"I've tried to postpone [it]," he says. "For me to take that step over the goal line is to stop playing the game. I'm trying to push [that step] as far away from me as I can."

This doesn't mean he's deluded; he's not going to play if he's a burden on his teammates or if it means torturing his body, which is now in its fifth decade, through a career that spans 23 years, nine different clubs (including Milan on three occasions) in seven major leagues and in which he has won 33 team trophies.

"I need to be healthy and I want to feel good when I play," he says. "[It] makes no sense to play the game if you suffer too much, better to be realistic and tell yourself ... it's enough. But I'm not there yet. And I'm not even thinking about it. Because focusing on it means that in my head I'm prepared to stop. And if I'm prepared to stop, I'm not able to help my teammates and not helping myself achieve what I want."

For somebody who has always been the main man, who plays into the alpha male image with glee, Zlatan is very clear on what his current role is: he's not the hub of Milan's wheel, he's the big brother/motivator/leader who will do everything he can to help the club win their first Serie A title in a decade.

"This is not a one-man show, this is [something] we do together," he says. "I have this responsibility, I have teammates who look up to me. I think of my experience, the players I've played with, the coaches I've played for ... at my age now it's all about giving back. I've had moments in my life where all I did was take, without giving back. Not on purpose, but just because when you're young, you try to show the whole world who you are; you're not satisfied, you want to show you're the best.

You can see the difference in his numbers and in the way the team has changed. After a 21-month spell with theLA Galaxy in Major League Soccer, when he arrived in Milan in January 2019 (his second stint with the club), they were 10th in Serie A. He played in 18 of their remaining 21 games that season (starting 16 of them), scored 10 goals and lifted them to sixth place. Everything went through him offensively. It wasn't necessarily the sort of high-press, high-octane football the club's owners and coach Stefano Pioli, who had taken over that October, wanted to play, but it got the job done.

Last season began the same way. He had 10 goals by mid-January and Milan were top of the table, but then he got injured and missed two months. When he returned, things had changed somewhat. His minutes declined and, when he was on the pitch, it was more about serving the team than the other way around. He'd hold up play, attract defenders, look to set up teammates and drop deeper to help.


Milan finished third, and when he agreed a contract extension to the end of the 2021-22 season -- taking a big pay cut -- he had accepted a different role. Now he shares playing time up front with the 35-year-old Olivier Giroud.

On a team with so much youth -- Fikayo Tomori, Ismael Bennacer and Theo Hernandez are 24; Rafael Leao, Alexis Saelemaekers and Brahim Diaz are 22; Sandro Tonali and Pierre Kaluluare21 -- Zlatan is what Milan need. Heck, most of his teammates were still wearing diapers when he was playing in Champions League quarterfinals. But with three games to go, Milan are top of the table, two points ahead of local rivals Inter. If they win, it will be the 14th league title and the 24th major trophy of Zlatan's career.

"The team is young, we're growing, getting more and more experience," he says. "I know from my own experience, from one week to another, a lot of things can change. So we need to stay focused."

Injuries have slowed him this year, but it's not as if he's just the old guy dispensing advice from the corner of the dressing room. When he has played, he has come up big, most definitively in delivering the assist for Tonali's winner against Lazio last month. And his numbers per 90 minutes aren't dissimilar to his first, prolific half-season back at Milan: his expected goals (xG) are higher (from 0.48 to 0.50), as are his shots (3.89 to 4.05) and his aerial wins (4.81 to 4.91). So too, incredibly, are his defensive pressures (7.77 to 8.51): still near the bottom of Serie A players' stats, mind you, but an indication that when he's on the pitch, he's going to make it count.

He may be different in some ways, but the old Zlatan, the quotable, larger-than-life Zlatan, is still around. Last year, when a jack-knifed truck caused an almighty traffic jam and left him in gridlock for three hours and late for a guest-host spot at the Sanremo Festival, Italy's highest-rated annual TV event, he did what only Zlatan might do. He got out of the vehicle and flagged down a passing scooter.

The driver recognised him and told him he was a Milan fan. "Listen, you need to bring me to the festival," Zlatan said. Shocked, the driver couldn't possibly say no. "I was lucky that he was a Milan fan and believed in God ... so when I appeared, he did what I asked," says Zlatan. They spent an hour weaving through the gridlock with Zlatan (who is not a small man) hanging off the back of the scooter. It was slow-going to the point that the Swede offered to drive and only later did he find out it was the driver's first time driving on the highway, but he got there.

Or consider his response when asked about possibly returning to MLS, maybe to join his old PSG teammate David Beckham's franchise, Inter Miami.


Or his time in England at Manchester United from 2016 to 2018, when he arrived as a hated super-villain and then got annoyed when people started liking him.

"People get obsessed with image and they think they live in a movie. But when the movie ends, they don't get any attention and they'll suffer. I'm realistic. I'm myself. I know that if I didn't play football, you wouldn't be interviewing me."

"If I didn't play football." Those words leave you wondering what might have become of Zlatan if he hadn't been blessed with talent, as well as the mentality and fortitude to excel in the game. Squint and maybe you can see the big, gangly kid from the tough immigrant Malmo neighbourhood of Rosengard. The one who would pilfer training gear from the Malmo FC academy because it was better than his own clothes. The one who would later steal Tommy Hilfiger and Ralph Lauren apparel from shopping malls so he'd at least dress like the native-born Swedish kids. The one who found solace and purpose (as well as a penchant for spectacular, acrobatic overhead kicks and backheels) in Taekwondo at his local community center.

"Every day was a struggle against poverty and shame," he wrote in his most recent book. It's an immigrant story that has been repeated countless times around the world, though if you ask him about it today, he leaves you with a message of hope.

"I think I helped open up doors," he says. "Even if you're not the stereotypical Swede, people from different backgrounds now have more possibilities. And they can have more belief. A lot of things happened since I was the little kid running around. When I was young, there were no doors, there was a wall. With my mentality, my ego, my will ... I went through those walls. I broke holes in the walls and they made doors and those doors are open now. Whoever comes through them, no matter their background, will have a chance. Things have changed and are still changing. This is what I believe. We just have to keep going and try to [reshape] the world in a better way."

Maybe, when the time comes to hang up his boots and for the warrior to rest, that's what will provide the adrenaline rush he has craved over the past 20-plus years: making the world a better place. He's anxious, he's scared, he's panicked; he's a man confronting his own fear of losing what has driven him for so long. He's a grown-up Zlatan. And while he may not feel ready for what comes next -- heck, he may not be ready for what comes next -- he's stronger and better equipped for it, if only because he's asking the right questions. 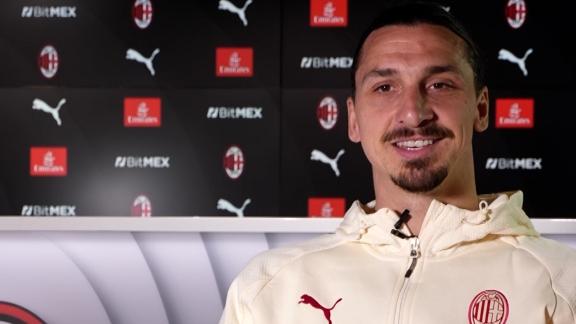 Zlatan admits he's 'panicking' about life after football
Zlatan Ibrahimovic tells Gab & Juls why he has no plans to call time on his playing days just yet. 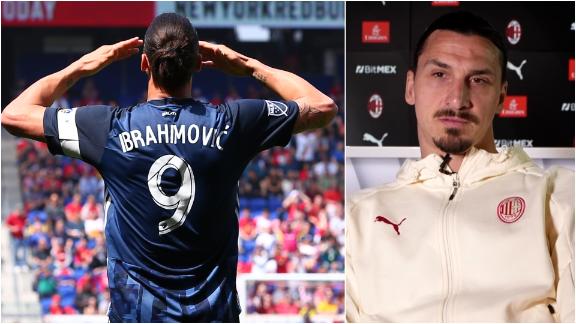 Zlatan: I was too good for MLS
Zlatan Ibrahimovic tells Gab & Juls that he's the best player to have ever been in MLS. 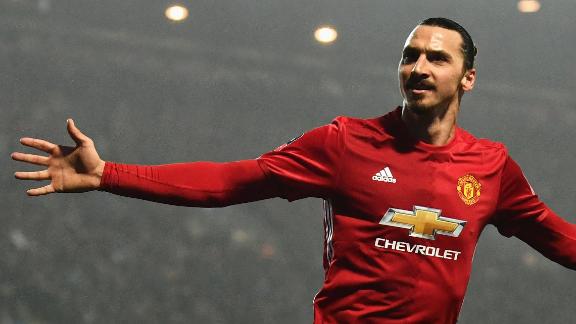