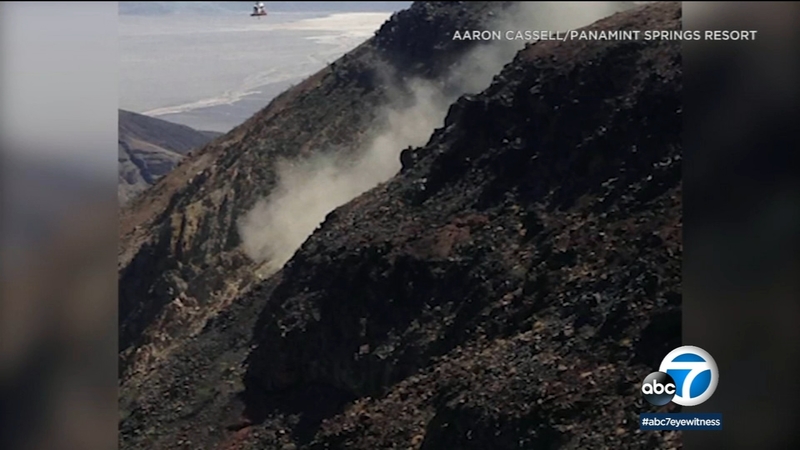 A search-and-rescue helicopter was dispatched to the scene from Naval Air Weapons Station China Lake about 10 a.m., according to Commander Ron Flanders, a spokesman for U.S. Naval Air Forces.

The aircraft from VFA-151 was on a routine training flight when the mishap occurred. Search and rescue units from @NAWS_CL and NAS Lemoore are on scene. The cause of the mishap is under investigation.

The seven who were injured are tourists from France, all members of the same family. They were at an overlook checking out the view of the canyon, and say they didn't even know the military used the area.

Most of them suffered nicks, cuts and burns when they were hit with shrapnel from the crash. One member of the group was more seriously injured with burn injuries on her back and was being taken to a Los Angeles-area hospital for treatment.

"We were in front of the valley and the planes crashed, around 50 meters from us," said one of the injured tourists.

Aaron Cassell was in the area, near a vista point called the Father Crowley Overlook, when the crash happened. He said he saw a large black cloud rise over the crash site and another Navy jet circling the scene.

"My father went up to the crash to see if he could help," Cassell said. "There was debris all over the Father Crowley parking lot and Father Crowley vista."

According to KNTV, initial reports indicated the jet went down on the west side of Death Valley National Park, near the Father Crowley Overlook, which has been temporarily closed.

The overlook is an area informally known as "Star Wars Canyon," which has been used for military training flights since the 1930s, said Patrick Taylor, a spokesperson for the park.

The location regularly attracts tourists eager to watch military pilots make their way through the narrow canyon in maneuvers that evoke the "Star Wars" films.

Hours after the crash, officials said the search for the pilot was continuing.