Roaches, mold and crumbling ceilings - complaints from some tenants who say it's not what they expected when they signed leases on their rental homes.

LOS ANGELES (KABC) -- Roaches, mold and crumbling ceilings - complaints from some tenants who say it's not what they expected when they signed leases on their rental homes.

Another tenant didn't expect to be jolted by an electric shock during a dip in her swimming pool either.

"I jumped in the pool, the pool was literally electrified," Cathy Cole told Eyewitness News of the shocking experience on Memorial Day weekend.

"It scared me," she said. "I thought I was being electrocuted."

Cathy said the shock was caused by shoddy work on a loose ground wire by a vendor hired by her landlord - Starwood Waypoint Homes. 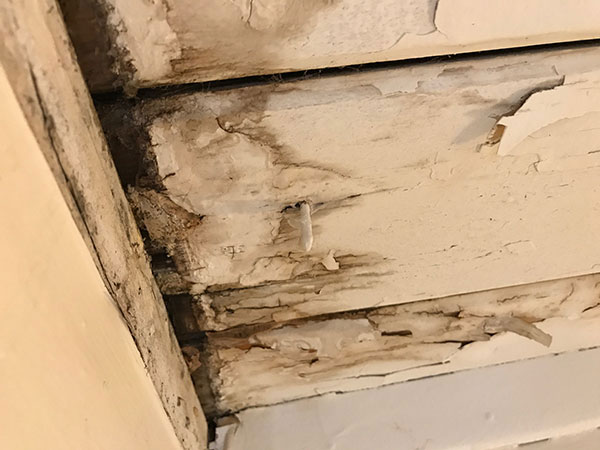 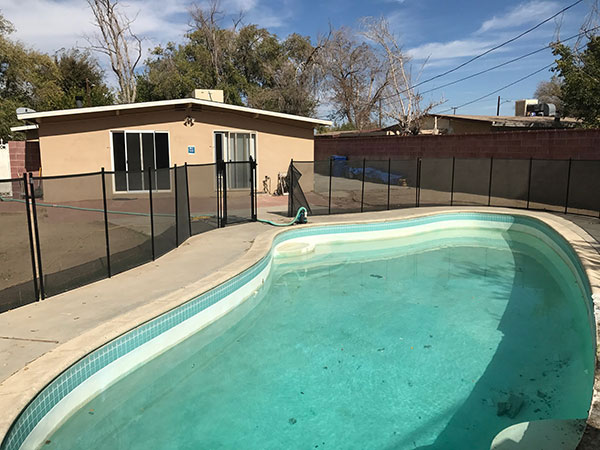 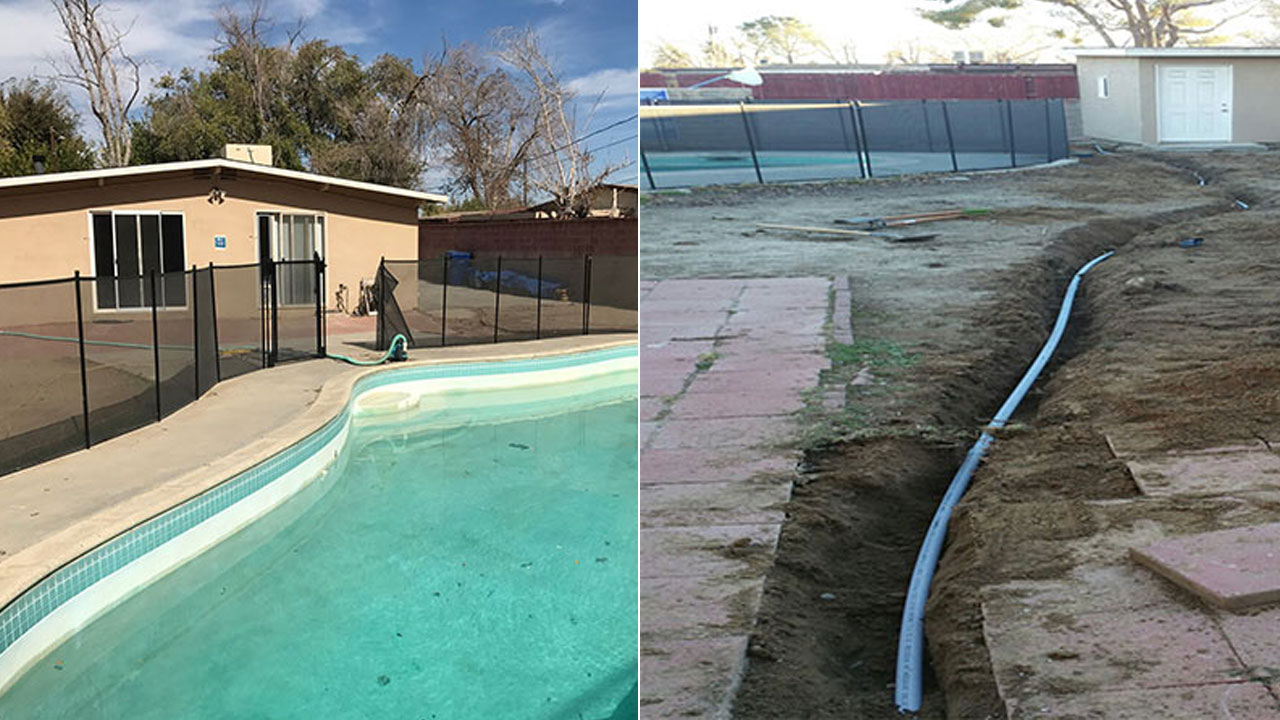 Waypoint is part of a new breed of corporate, mega-landlords scooping up mostly foreclosed single-family homes across the country. In a series of big money deals, some of the largest corporate landlords have recently merged, adding tens of thousands of these homes to their portfolios.

Just this week, Starwood Waypoint merged with Invitation Homes. They are now the largest landlord of single-family homes in the world - controlling an empire of 82,000 rental homes nationwide, with about 8,000 in Southern California alone.

Cathy Cole said she put up with years of frustration over a leaking roof at her Lancaster home. Waypoint, she said, did patch-work type repairs but the leaks continued. She said she had to threaten the company with a lawsuit before they finally agreed to replace the roof this fall.

"Three-and-a-half years and eight prior repairs to fix the same leak," Cathy said.

Waypoint acknowledged there were too many repair attempts before making the decision to replace the roof - but said its decision to do so had nothing to do with the threatened lawsuit.

Cathy Cole is one of dozens of tenants to come forward in a joint ABC and Eyewitness News investigation. ABC stations across the country found tenants with frustrating stories to tell - from collapsing ceilings to health concerns they attribute to suspected mold or raw sewage.

"Complaints are coming in from all over the United States," said Matt Fehling of the Better Business Bureau. "Things like air conditioners going out for extended periods of time, water leaks."

The Better Business Bureau said Waypoint has a pattern of complaints, is slow to respond to maintenance requests and quick to tack on extra fees. Its' current BBB rating is a D+.

Waypoint told ABC News it's always striving to do better. The company claims a 99 percent satisfaction rating, but acknowledges those ratings are only from surveys taken after repairs are made. 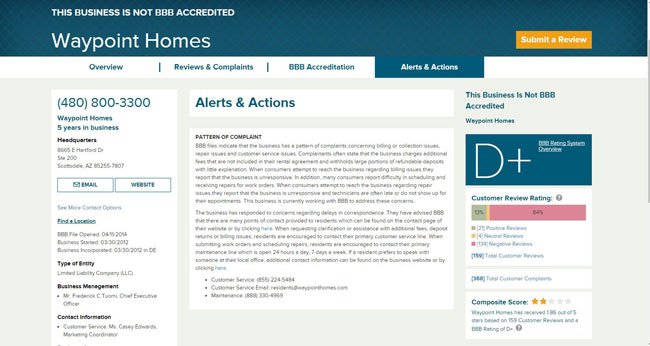 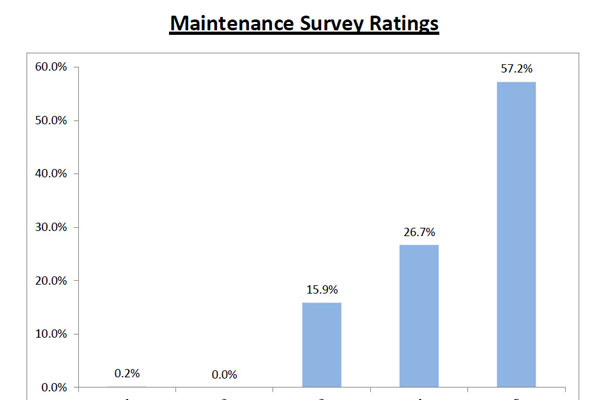 "How does that measure up with the 99 percent approval rating when you have a D+ from the Better Business Bureau," ABC's Chief Investigative Correspondent Brian Ross asked Starwood Waypoint Chief Operating Officer Charles Young.

"We're listening to our residents," Young said. "We're working with our residents. We have our own ratings, and we want to understand how we can get better."

Young said even one unhappy customer is one too many. But Eyewitness News had no trouble finding more than 20 current and former tenants with negative stories to tell.

"I'm super happy. I couldn't be more happy," said Alex Turner, of Granada Hills. "It's like winning the lottery moving out of here."

Longtime friends Alex Turner and Sherwin Roque just moved out of the Granada Hills Waypoint rental home they shared with their families.

"We had a pretty terrible experience with this house," Roque said as movers carted out the family's belongings last month.

"In the first week that we were here, our kitchen was full of roaches at night," Sherwin said.

Alex and Sherwin said it took 30 days to repair a leaking roof. Waypoint did not dispute that claim, but said its workers sometimes had trouble scheduling appointments to work on the home.

"It's a nightmare, a complete nightmare," Alex said.

"I've never experienced anything like this," Sherwin told Eyewitness News.

After ABC7 asked Waypoint about the families' claim that a broken air conditioning unit led to power bills of more than $1,000, a spokesperson said the company would be willing to potentially reimburse them if those costs were out of the norm.

A REDEFINITION OF THE "AMERICAN DREAM?"

Waypoint provided ABC News with a list of happy customers - and when contacted by network producers, the tenants confirmed they've had positive experiences and found Waypoint to be responsive to their maintenance requests.

Young told ABC News the now combined companies of Waypoint and Invitation Homes spend an average of $22,000 in renovations and maintenance on their 82,000 rental homes.

"The American dream has always been to own your own home," Brian Ross said in an interview with Young. "Your business model of the American dream is to rent your home and pay you rental fees?"

"The American Dream is to raise a family in a single-family home," Young replied. "Yes, there's a narrative around owning that home, but we actually provide an affordable option for our families."

Investigative reporter Aaron Glantz, of Reveal and the Center for Investigative Reporting, dug deep into this new breed of corporate landlords in a series of reports published this summer.

"We've never seen a landlord like this before," Glantz told ABC News. "We've never had companies that own tens of thousands of homes all across America."

"They're quick to charge fees," he added. "And if you look at their filings for shareholders, they brag that maintenance costs are going down."

Waypoint's Young pushed back against critics and said the company's size is a resource, and "on the ground, dedicated teams" provide great service so their tenants can live in great neighborhoods and good school districts.

"Neighborhoods were going through a really tough time back in 2012 as we were coming out of the housing crash. And we were part of bringing these neighborhoods back," he said.

Amy Feng and her husband were just out of the military when they rented a Waypoint home in Lancaster.

"They kind of just put band aids on everything instead of fixing it, and we've seen firsthand that doesn't work," Amy said.

Amy said Waypoint failed to fix a leaky faucet in their backyard. It recently burst, flooding their yard. The family's air conditioning broke two summers in a row. She said temperatures inside the home reached up to 104 degrees.

"My son doesn't do well in the heat," Amy said. "He gets these heat rashes where his entire body is covered in rashes." 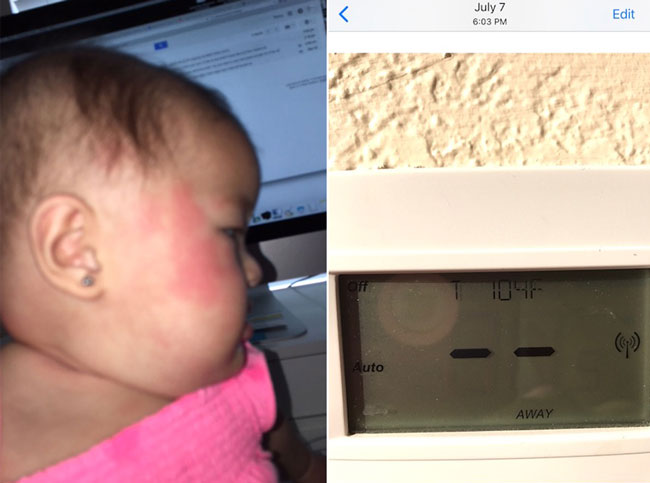 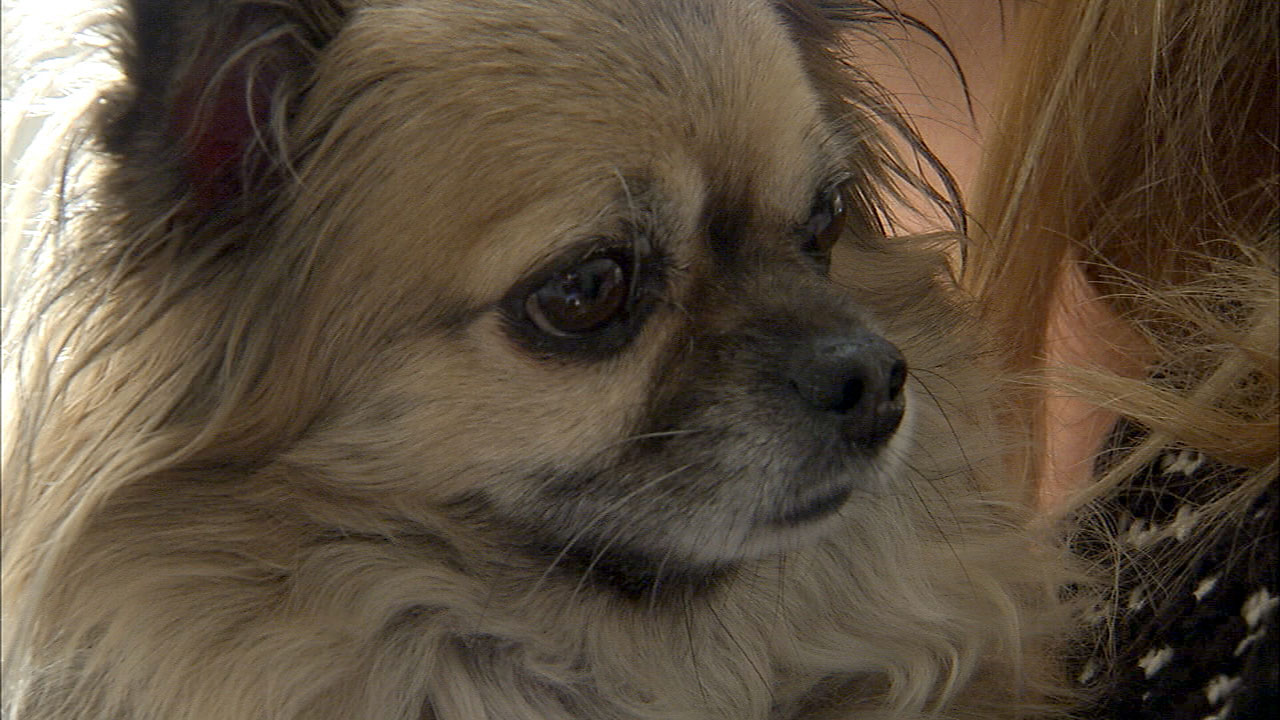 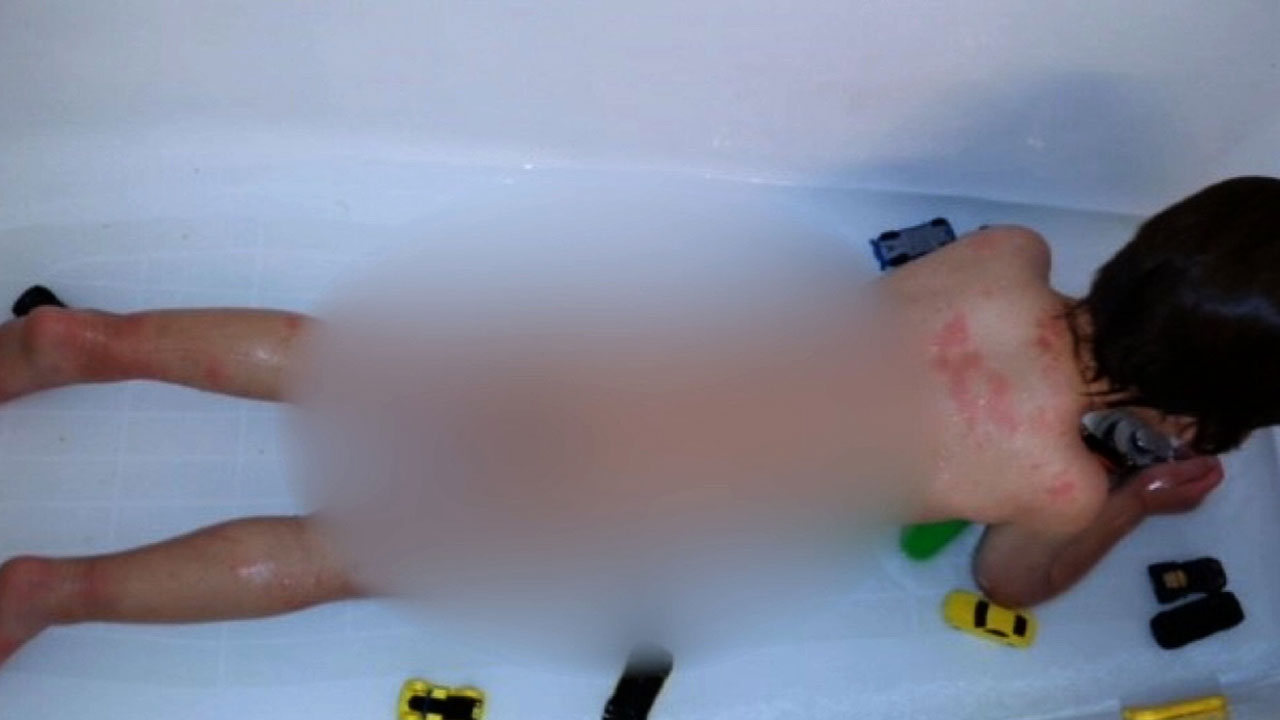 Waypoint did replace the AC unit in 2016 after 19 days, but Amy says it was installed improperly and broke again this summer, leaving the Feng family without AC for 24 days this time around.

Amy said the heat sent her epileptic dog "Chewy" into a seizure.

"My Chihuahua went into a severe seizure, the heat had triggered his body so much," she said.

Waypoint told the Feng family to stay in a hotel for three days to escape the heat this summer, but did not reimburse her until ABC7 started asking questions.

TRUMP ALLY CASHES IN ON COLLAPSE OF HOUSING MARKET

Who are these billionaire landlords cashing in on the collapse of the housing market that's driven tens of thousands of Americans into rental homes? A founder of one of these mega-landlord companies is a real estate tycoon who is the best friend of President Donald Trump.

"He will be the 45th President of the United States - Donald Trump!" said billionaire businessman Tom Barrack as he introduced Trump at the Lincoln Memorial on the eve of his inauguration.

Barrack just sold a Santa Monica estate on the edge of the Riviera Country Club for $34 million - and he's currently building a 77,000-square foot mega-mansion in the hills of Bel-Air.

"It's the greatest thing I've ever done in my professional life," Barrack said of his investment strategy at a Chicago real estate conference in 2012.

"This is my investment philosophy," Barrack told the audience. "You man up - or woman up - and you walk into a jungle where no one else wants to go and you swing and you fight and you bite."

Glantz described Colony as "the ultimate out-of-state, far-removed, absentee landlord," and Barrack as a "businessman who prioritizes profits over people."

Barrack sold his stake in the company - adding more than $200 million to his bank account.

Seventeen miles away from Barrack's palatial Santa Monica home, we found Janela Andrade, of South Los Angeles. She had no idea her original landlord was, in effect, the billionaire investor Barrack.

On the day ABC7 visited Janela's home, a Colony American Homes "For Rent" sign still laid on the ground behind the home.

"I am so happy to have this nightmare be almost over," Janela said.

Janela's dilapidated rental home is one of the 30,000 single-family homes across 10 states purchased by Colony and now owned by Waypoint/Invitation.

"We've been dealing with the smell for about two years now," Janela said of the pungent odor in the home.

"And you begin to see this growth," said Loui Gonzalez, of Mold Experts L.A. "Each one of those circles is an accumulation of mold spores, just living and thriving and building a colony."

According to lab results, two samples tested positive for dangerous toxic mold that's suspected to be related to water leaks throughout the house.

"As I squish it, water bubbles out," Loui showed Eyewitness News as he poked a soggy baseboard in Janela's bathroom. "You can see the green and black staining along the corners here."

Janela said she complained about the mold, but didn't get far.

"They sent a guy once," she said. "He just showed me how to clean it, warm water and Chlorox. That was pretty much it. He advised me that the issue was because of my body heat."

Waypoint disputed her account that an employee showed Janela how to clean what she thought was mold - and said an investigation in April found no "discoloration" in the home. Discoloration is their term for possible mold.

Eyewitness News was there for Janela's final move-out inspection. As the Waypoint inspector did his walk through, a roach crawled on the kitchen wall, and there were termite droppings in the window sill. He told Janela and an ABC7 producer he didn't notice any mold and did not comment on the roach or termite droppings.

He did, however, say Janela would likely be charged by Waypoint for a bathroom sink drain that appeared to be flowing just fine.

"It won't be, but it definitely will be. I'm pretty sure once you open it up, you'll find some hairs and stuff," the inspector said.

He told Janela the supposed clog would cost her $10.

That South Los Angeles home is now back up for rent - described as "charming" and "coming soon" on Waypoint's website.

After questions from Eyewitness News, Waypoint said Janela will not be charged for that drain or anything else -- and she will get her full security deposit back. They said work will be performed before any future tenants move in.

Current and former tenants of Waypoint/Invitation Homes are sharing their stories in this Facebook group.