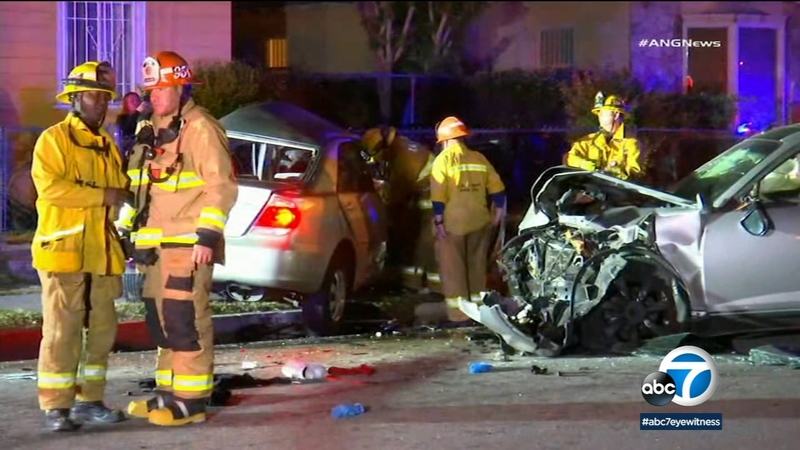 WILLOWBROOK, Calif. (KABC) -- A young mother was killed in a violent crash just before Mother's Day and police say the other driver appeared to be street racing.

The crash happened around 10:30 p.m. Saturday at Towne Avenue and 131st Street.

Witnesses say a young couple was driving a Toyota Camry on their way to pick up their 6-year-old child when they were broadsided by a gray Infiniti that was flying down the residential street.

The Infiniti appeared to be racing a red sedan. The driver of the Infiniti jumped into the red sedan and they took off, police said.

A deadly street race caught on camera in #willowbrook . An innocent young mother killed. The search now on for the 2 drivers who took off. pic.twitter.com/id6wCjITP2

The violent impact of the crash can be seen in the mangled wreckage left behind at the scene.

"I saw the girl inside her car," said witness Faviola Rodriguez. "The car was really damaged. I couldn't do nothing. I just saw her and she just asked for help. But she was really bad. Really, really bad. The girl was very young."

The 23-year-old woman from Compton who was driving the Camry was pronounced dead at the scene and the man with her was taken to a hospital with life-threatening injuries. Witnesses say despite his injuries, he didn't want to leave her side.

The CHP has released few details, but investigators say they are looking for multiple suspects.

Surveillance video from homes in the area shows two cars racing down the street at high rates of speed.