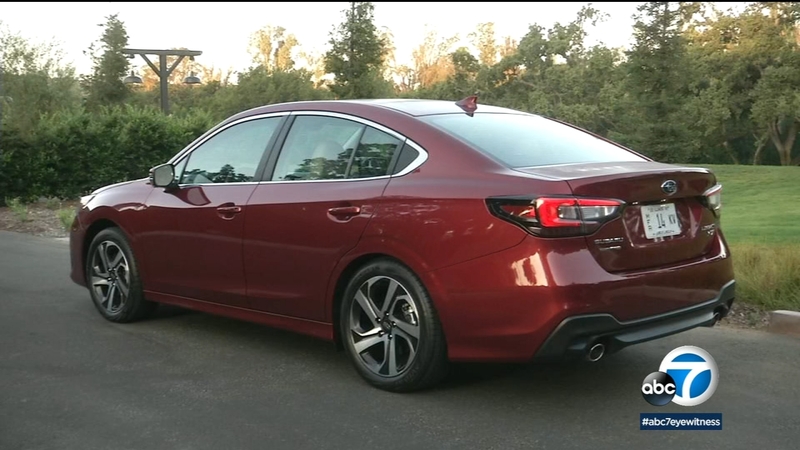 "The sedan, Legacy, is a very important part of our brand DNA. It was the first car built at our U.S. plant in Indiana, and it's really been a staple of our lineup ever since," said Peter Tenn, product planner for Subaru USA.

The new Legacy has modern styling on the outside, and it could almost be considered bland looking. But on the inside, there's much more style, including the hot thing in controls these days -- a huge touch screen. Large icons control all functions, but Subaru was wise enough to leave physical knobs for main controls like radio volume and tuning, temperature, etc.

Under the hood, a Subaru tradition of a flat four engine, with a turbo version optional. Horsepower figures are 182 and 260, respectively. And, all-wheel drive is standard. While the Legacy may have moved closer to the mainstream players in the segment like the Camry and Accord, it still retains its Subaru traits, like the all-wheel drive. And Subaru knows that many people still don't want an SUV, but like the idea of all-wheel drive for both wet and dry traction.

"We know there's a lot of advantages to sedans. And there's a certain segment of customers that really appreciate that," added Tenn.

For years, Subarus have had a kind of "earthy" vibe to them, and many models still do. But a lot of sedan buyers these days want luxury. So in this new generation of Legacy, you can now step up to a trim level called Touring, which features genuine Napa leather among other amenities.

And while Subaru is committed to the sedan game, they're fully in the SUV game as well. Also new this year is the 2020 Outback. It was an early combination of wagon practicality and SUV style going back to 1994. The Outback still shares many components with the Legacy. It's a fraternal twin, for different tastes.

"Really when you think about it, they're in very different segments. One's a sedan segment and one's a mid-SUV. And the customers for these vehicles are very different as well," said Tenn.

Nonetheless, if you drive a new Legacy and a new Outback back-to-back, you'll probably notice more similarities than differences.

And, being different has appeal for lots of car buyer these days - from the style to the brand. Subaru may have gone a bit more mainstream with the new Legacy, but they like to point out that they're different as well. Different in a good way, of course. Prices for the new Subaru sedan range from $22,745 to $35,895 for a Touring XT with the turbocharged engine.
Report a correction or typo
Related topics:
automotiveauto industrycarsauto news
Copyright © 2021 KABC-TV. All Rights Reserved.
TOP STORIES
Human remains found in Yucca Valley ID'd as Lauren Cho, coroner says
OC-bound flight diverted after passenger assaults attendant
DTLA hit-and-run: Video shows driver slam into woman riding scooter
Boy dies after falling 3 stories from bedroom window of Santa Ana home
Mother is mourned at vigil after being killed in South LA hit and run
School board president caught on hot mic after parent's remarks
Costco shooting: Family of man fatally shot by LAPD officer wins $17M
Show More
Tom Hanks crashes beachfront wedding in Santa Monica
Video: Fast-moving tornado whips across Texas interstate
How it happened: Inside 'Rust' movie set where Baldwin's gun fired
Hwy 1 closed on Calif. central coast after rockslide
Biden announces deal, seeks votes: 'Let's get this done'
More TOP STORIES News