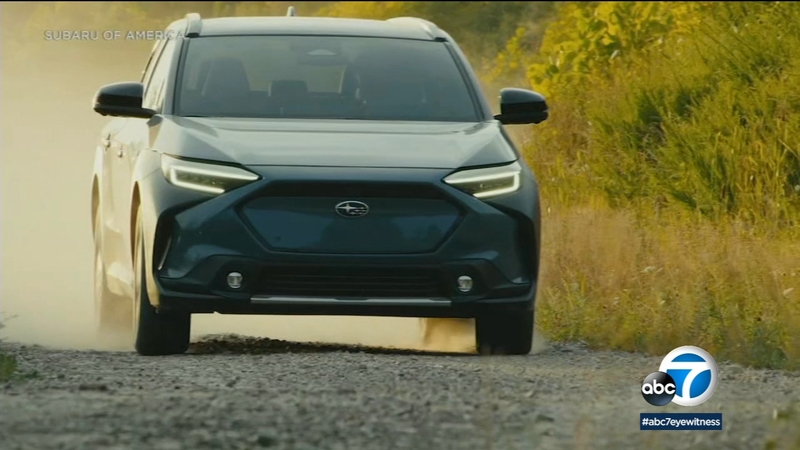 Subaru is known for making some pretty distinctive vehicles: Hot cars, like the rally-inspired WRX, and rugged yet practical SUVs like the compact Crosstrek.

"Not only electric, but something that can fit all the requirements of what Subaru customers need to do with their vehicles," said Garrick Goh, planning manager at Subaru of America.

Loyal Subaru customers, in many cases. And for many of them, all-wheel-drive capability was a must from the get-go.

"This car does have best-in-class ground clearance, at 8.3 inches. So when you couple that with symmetrical AWD and also the dual-function X-mode with grip control, it actually does quite well on trails," added Goh.

It works well on pavement too, with a huge cargo area, and plenty of seating room. Battery range is about 225 miles officially, but the one I drove seemed to be doing much better than that, according to the onboard computer.

Subaru must be onto something, as the Solterra already appears to be a success just over two months after they opened the reservation process.

"We sold out half the year's production in about an hour, and the second half shortly thereafter," Goh noted.

It's no secret that the Solterra was developed alongside Toyota's new electric vehicle, the bZ4X. But the Solterra is definitely not just a Toyota with some Subaru badges stuck on.

Yes, if you look at both of them, there are similarities between the bZ4x and the Solterra. But Subaru is quick to point out that they had an equal partnership in development, to make their vehicle a true Subaru.

This might be Subaru's first EV, but definitely not the last.

"We have plans to electrify many more of our vehicles between now and the end of the decade," hinted Goh.