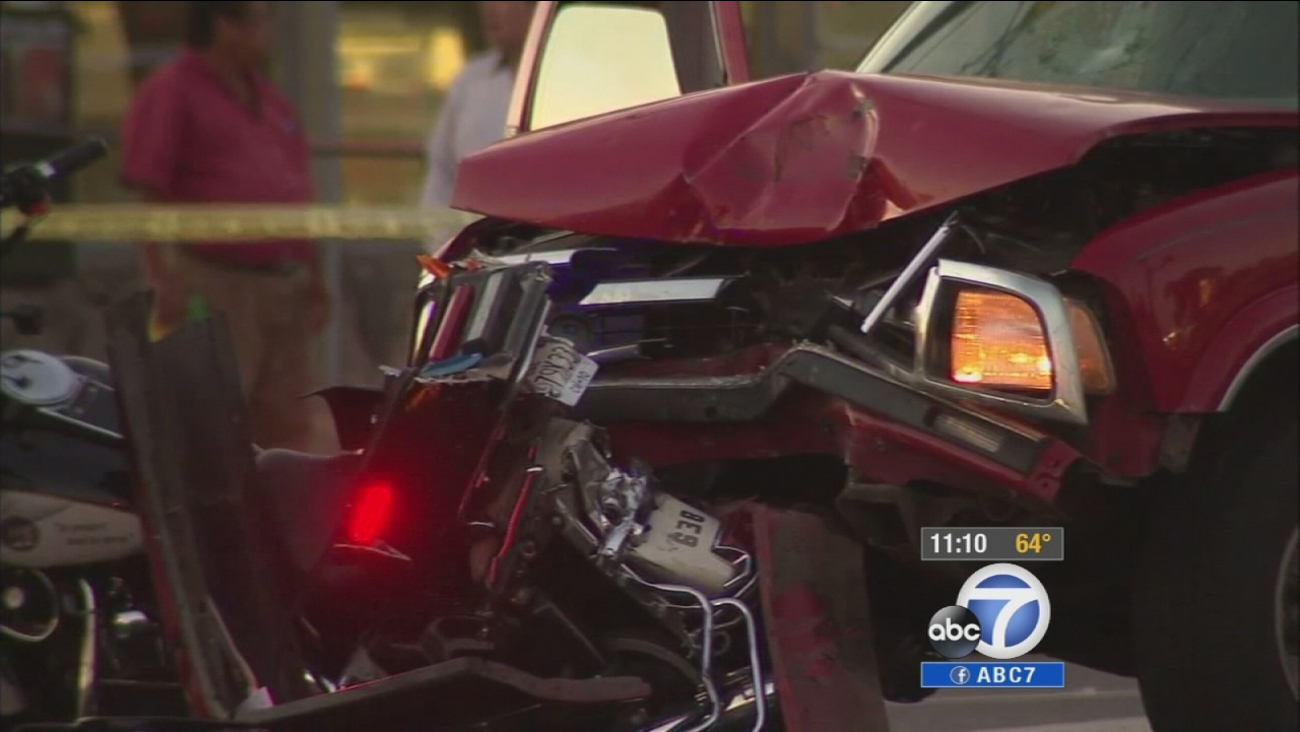 An LAPD motorcycle and a vehicle are seen after a crash in Sun Valley on Saturday, April 5, 2014. LAPD Officer Chris Cortijo was on the motorcycle.

LOS ANGELES (KABC) -- One person has been arrested following a crash in Sun Valley that left an LAPD motorcycle officer critically injured.

Qaneak Cobb, 33, was arrested for DUI and narcotics, according to LAPD Valley Traffic Division officials. Cobb was one of two people detained after Saturday's crash. Cobb is facing felony charges and is being held on $185,000 bail.

The crash occurred at the intersection of Saticoy Street and Lankershim Boulevard around 5:34 p.m. Investigators say the officer was stopped a traffic light when he was struck from behind by a red Chevrolet Blazer traveling at a high rate of speed. The officer ended up pinned between two vehicles.

"I saw his helmet right across the street. From what I understand, his helmet just basically flew off all the way to the other side of the street," said witness Darren Fine.

The LAPD Valley Traffic Division officer, a 26-year veteran of the department, was rushed to Providence Holy Cross Medical Center in Mission Hills. Officials on Sunday said he has undergone two surgeries and is in a medically induced coma. Out of respect for his family's wishes, the identity of the officer has not been released.

Los Angeles police Cmdr. Andrew Smith said Saturday that Chief Charlie Beck visited the injured officer in the emergency room. Smith said other fellow officers were in a nearby waiting room, praying for their brother.

"I've known the officer for probably 17-18 years. Sometimes, you don't have to be doing anything wrong. You can take all the safety precautions you want and somebody else does something and you may pay the price for it," said Sgt. Kurt Smith with the LAPD Valley Traffic Division.

The LAPD is asking the public to donate blood on Monday to support the injured motorcycle officer. The blood drive will be held at Providence Holy Cross Medical Center from 10 a.m. to 4 p.m.