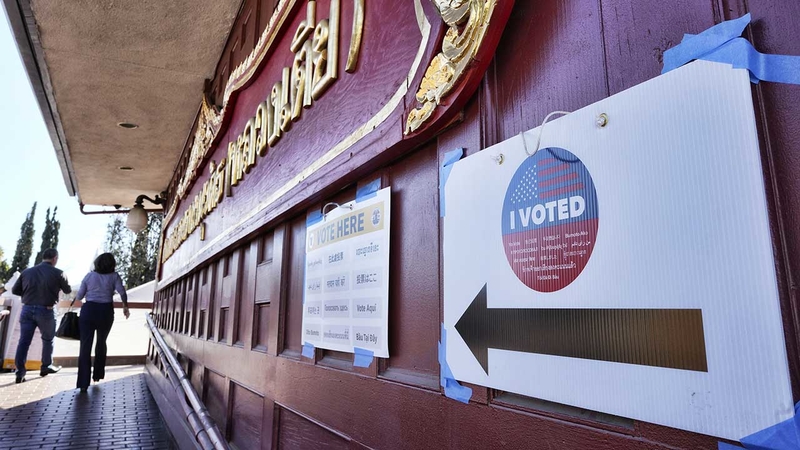 California Democrats looking for a candidate to defeat President Donald Trump will pick from a suddenly-reshaped presidential field on Tuesday.

California is one of 14 states that will vote on Super Tuesday.

It's the biggest prize by far, with more than 400 delegates at stake.

"I love Elizabeth Warren, I love Bernie Sanders, I love Pete Buttigieg - but Joe Biden has done more for Los Angeles than all of the other candidates combined," Garcetti told ABC7. The mayor cited Biden's plan for free college tuition and environmental improvements.

Campaign officials said Biden would be in the Baldwin Hills area on Tuesday, alongside Garcetti.

Meanwhile, Rep. Alexandria Ocasio-Cortez voiced her support for Sanders, noting that "Bernie has held over 40 events in" California and "talked to over 140,000 Californians at his rallies."

Massachusetts Sen. Elizabeth Warren is also looking for a big win in California. Warren on Monday made a campaign appearance at East Los Angeles College.

"Voters deserve a choice of someone with unshakable values who can also get things done and bring all kinds of Democrats along with her," she said to her 3,000 supporters in the crowd.

As Joe Biden picked up key endorsements from former key rivals, Elizabeth Warren was campaigning in Los Angeles on the eve of Super Tuesday.

She also cautioned against a Biden presidency.

"No matter how many Washington insiders tell you to support him, nominating fellow Washington insider will not meet this moment," Warren said. "Nominating someone who wants to restore the world before Donald Trump when the status quo has been leaving more and more people behind for decades is a big risk to our party and for our country."

Voter Celeste Shield said she "voted for Elizabeth, just because I really believe in her platform around equity and access, and supporting people of color and young people and education and health care."

California officials bracing for long lines are urging patience as voters cast ballots on Super Tuesday in what could be record turnout for a presidential primary election.

A fraction of the 20.7 million registered voters in the heavily Democratic state has already returned ballots in early voting. Early voting started last month, but officials expect the bulk of ballots to be cast Tuesday.

Garcetti urged voters to go to the polls, even if their favorite candidate is no longer in the race.

"Elections are not always about falling in love or your very first choice," he said. "It's about making the best decision. And right now, with a couple of candidates that just dropped out, it is absolutely critical."

Enthusiasm is high for the election, which was moved up from its usual spot in June. But the election also coincides with a number of changes aimed at expanding voter participation and those changes may end up confusing voters or contributing to longer lines.