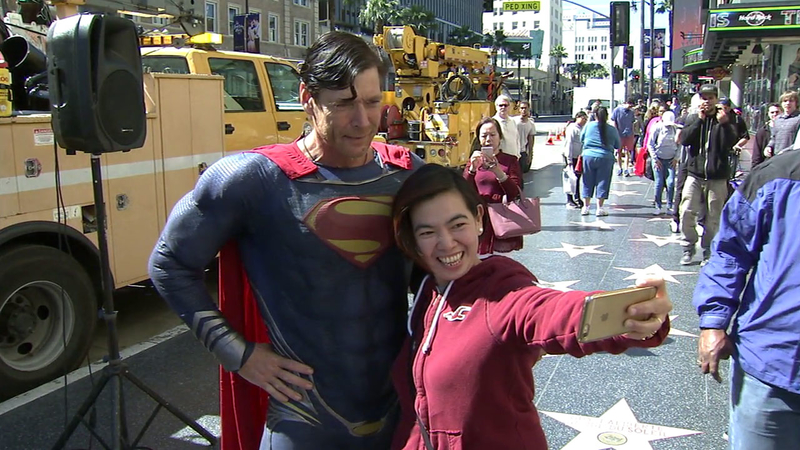 HOLLYWOOD, LOS ANGELES (KABC) -- It was a triumphant return to Hollywood Boulevard for a performer who was brutally attacked a year ago.

Christopher Dennis has portrayed Superman for 25 years, until he was nearly beaten to death and robbed of his precious costume and cape. The outfit was set on fire, leaving the performer with no way to make money.

"I'm glad to be back because this is something that I started 25 years ago and it's my lifelong dream to be out here and helping people," Dennis said on Monday.

A Superman impersonator will make his return to Hollywood Boulevard after a violent assault last year.

Dennis said words of wisdom from Christopher Reeve helped him get back on his feet after the savage attack.

"As Christopher Reeve would say, 'You can't let your setbacks set you back,'" Dennis said.

Dennis snapped right back into character on the boulevard, taking pictures with people and bringing smiles to their faces. He said the attack made him lose all hope and his life began to spiral into a dark hole.

That was until he said his friends helped him find his way back.

"I'm just happy to be back and doing what I love," Dennis said. "I got so much support."

One of his biggest supporters is Ross Johnson, who portrays the superhero Logan "Wolverine" on Hollywood Boulevard.