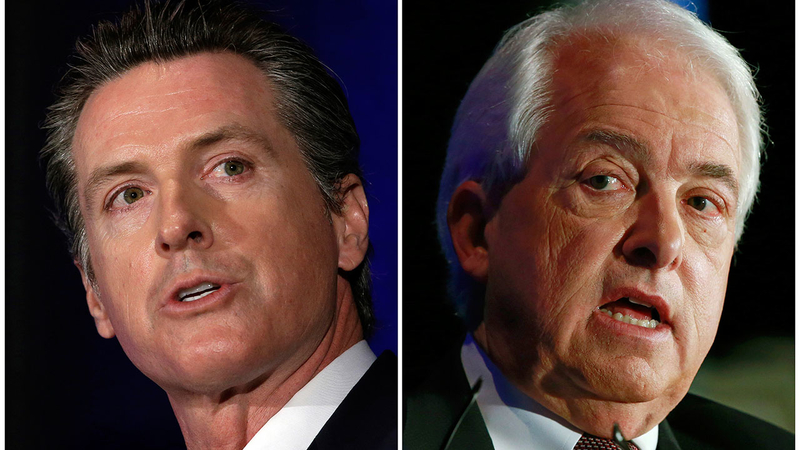 LOS ANGELES (KABC) -- With only three weeks before the midterm election, a poll done by SurveyUSA shows that Gavin Newsom leads John Cox in the governor's race and that the 2017 gas tax may be repealed with the passage of Proposition 6.

In the survey, 762 likely voters were asked how they would vote in the governor's race and Gavin Newsom came out with 52 percent of the vote, while Cox got 35 percent and 14 percent of those polled were undecided.

Cox also narrowly leads Newsom in the Central Valley and Inland Empire, but Newsom leads by 18 points in greater Los Angeles and 47 points in the Bay Area.

The survey participants were also asked about Proposition 6, which would repeal the hike and vehicle fees. The measure would also require any future fuel taxes to be approved by voters.

Among the 762 likely voters polled, 58 percent said yes and 29 percent said no. Only 13 percent were undecided.

Proposition 1, which would allow the state to issue $4 billion in bonds for existing affordable housing programs for low-income residents, veterans and farmworkers, was supported by 62 percent of participants.

As for Propositions 7 and 11, the measures were supported by 58 percent and 54 percent of likely voters polled, respectively. Prop 7 would allow state lawmakers to establish a permanent, year-round Daylight Saving Time. Prop 11 would require private-sector emergency ambulance employees to remain on-call during work breaks.

The poll also showed that Sen. Dianne Feinstein fails to gain more than 40 percent of support among likely voters. She only leads her opponent state Sen. Kevin de Leon by 14 percentage points, according to the results.