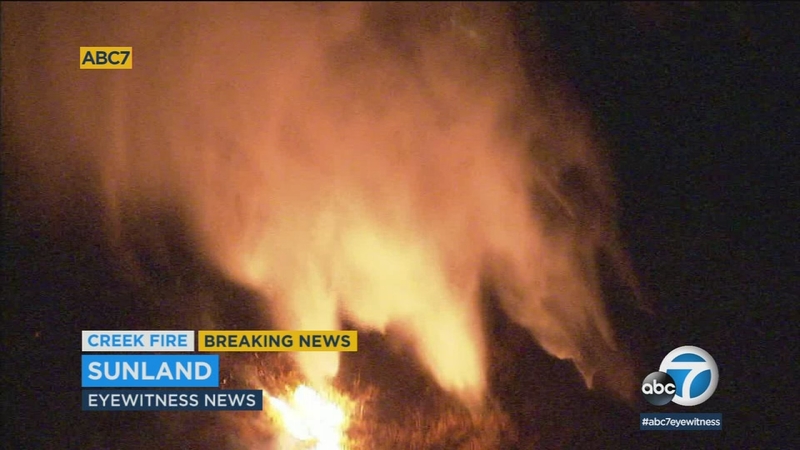 Los Angeles County Fire Department officials confirmed the Creek Fire has expanded to 11,000 acres and has no containment. More than 800 firefighters from different agencies and more than 50 engines were assisting in the fire fight.

Garcetti declared a state of emergency in the city of Los Angeles.

Gov. Jerry Brown also declared an emergency in Los Angeles County for the Creek Fire, as well as the Rye fire.

Garcetti urged people to follow evacuation orders. The city would have police officers patrolling evacuated neighborhoods to watch out for looters, he said.

"We have lost structures, we have not lost lives," Garcetti said in a Tuesday afternoon briefing. "Do not wait. Leave your homes."

Horse owners had trouble evacuating their animals as the Creek Fire approached in the Sylmar area.

About 115,000 residents were affected by evacuation orders, Garcetti said and about 10 percent of those would need shelter.

The Creek Fire was first reported around 4 a.m. as a 100-acre fire in the area of Gold Creek and Little Tujunga Canyon roads.

The Los Angeles Unified School District also had multiple school closures in the area. The latest updates are posted here.

The wind-driven blaze also led to a closure of the 210 Freeway. About 200 LAPD officers were also deployed to assist with evacuations.

Residents were seen evacuating their homes as flames continued to spread quickly amid strong wind conditions. Some residents in the area took matters into their own hands, spraying their homes with water as thick, black smoke from the Creek Fire approached.

Two firefighters were treated for minor injuries battling the Creek Fire, but no other serious injuries or fatalities were reported.

The blaze was one of multiple fires burning throughout Southern California amid dangerous dry and windy Santa Ana conditions.

Firefighters were also battling a massive brush fire that charred more than 70 square miles, dubbed the Thomas Fire, in Ventura County, where more than 150 structures were destroyed.