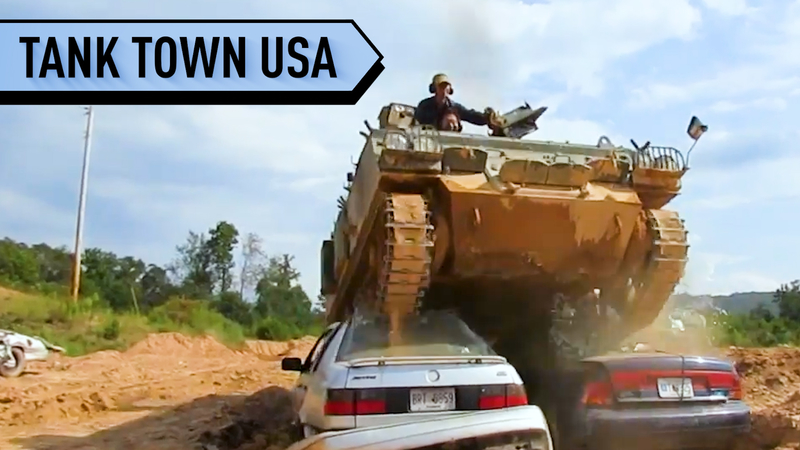 Blue Ridge, GA. -- A roar rolls over the Great Smoky Mountains, the sounds of steel and aluminum ripping apart, glass exploding, and diesel engines belching fury. The man responsible for the noise calls it Tank Town USA. Since its opening in 2013, this rough and ready theme park has quickly become one of the top destinations for road trips meandering through southern Appalachia.

Owner Todd Liebross first envisioned his Tank Town during a trip to England, where he saw a similar operation and realized he could replicate it. As the United States stopped selling U.S. Military armored vehicles to the public back in the 1950s, he was forced to import these 1960s personnel carriers from the United Kingdom. At nearly fifteen tons each, these historic vehicles have become the focal point of his attraction and business.

Beyond crushing cars in the tanks, patrons can also partake in a slew of other activities, including a hands-on experience with on-site construction equipment. Though youll risk your feet being entombed by the infamous Georgia clay, the reward of a visit will be well worth it. Tank Town has transcended the identity that is the American roadside attraction, becoming a foremost destination of Blue Ride Georgia
Report a correction or typo
Related topics:
localishwtvd
TOP STORIES
Police investigating smash-and-grab robbery at OC jewelry store
Over 100 shots fired in Inglewood ambush that killed 4, neighbor says
Wild Wall Street: Up-and-down day reflects market uncertainty
CA students must get COVID-19 vaccine under new proposed bill
Rams ban ticket sales to 49ers fans in Bay area
Super Bowl Experience jam packed with games for fans of all ages
Growing the American dream in new ABC drama 'Promised Land'
Show More
Koreatown service dog is dead after being attacked by two pit bulls
Tax changes you should know about before filing this year
Cause of death revealed for 23-year-old woman found dead after date
Dad charged and fired from job after racist tirade posted on TikTok
Woman killed in 'targeted ambush' at her birthday party in Inglewood
More TOP STORIES News