According to an Instagram post, the video was taken by a Native American student who felt "violence was being committed."
KABC
By Rob Hayes 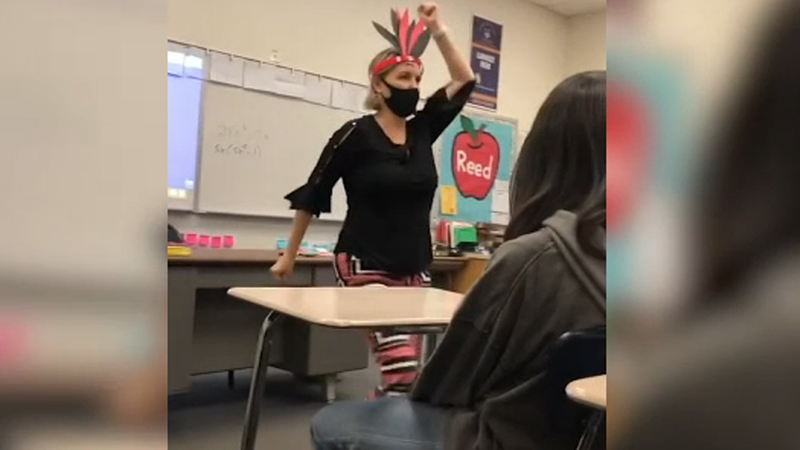 Teacher on leave after 'offensive' video circulates on social media

RIVERSIDE, Calif. (KABC) -- A math teacher at North High School in Riverside has been placed on leave as the district investigates a video showing the instructor dancing in Native American-inspired headgear.

The video was filmed by a student and has been shared thousands of times on various social media platforms, including Instagram and Twitter.

The recording shows the teacher, Candice Reed, wearing a headdress made out of what appears to be fake feathers.

"A recording of one of our teachers has been widely circulated on social media," read a statement issued by the Riverside Unified School District Administration on Thursday. "These behaviors are completely unacceptable and an offensive depiction of the vast and expansive Native American cultures and practices. Her actions do not represent the values of our district. The teacher has been placed on leave while the District conducts an investigation."

The district's statement continues saying, "We are deeply committed to implementing inclusive practices and policies that honor the rich diversity of our district and the greater region. We will be working with our students, families, staff and community to regain your trust."

According to the Instagram post, the video was taken by a Native American student who felt "violence was being committed against him" and claims he "had the right to record."

Assemblyman Jose Medina, a Democrat from Riverside who authored the legislation that helped make California among the first in the nation to list ethnic studies as a graduation requirement for all public high school students, spoke out about the incident on Twitter.

"We fully condemn the actions that took place at John W. North High School earlier this week," read a statement. "The teacher's behavior was highly inappropriate and offensive."

The statement continued saying, "It is damaging and disheartening to see Native American and indigenous culture represented in such a trite and insensitive way. However, this is not an isolated incident, as such teaching practices, even in math classes, have been used across the nation. It is time to stop this behavior."

.@AsmCervantes, @AsmJamesRamos, and I released the following statement on the incident at John W. North High School in Riverside. pic.twitter.com/Kmw78ptDX2

Native American protesters lined the sidewalk outside the school Thursday.

"It was totally disgusting - had no place in a school classroom, actually has no place anywhere," said Dee Dee Manzanares Ybarra of the American Indian Movement of Southern California.

Chrissie Castro, the chairwoman of the Los Angeles City and County Native American Indian Commission, said the teacher's behavior is not just insulting, but dangerous.

"We are dehumanized in the classroom, false histories of our people, making us seem that we are primitive peoples - all of those things have real mental health repercussions for our young people," Castro said.