As of Wednesday, 570 of the 1,055 inmates have tested positive as well as 10 staff members. It is the highest rate of infection at a federal facility in the nation.
KABC 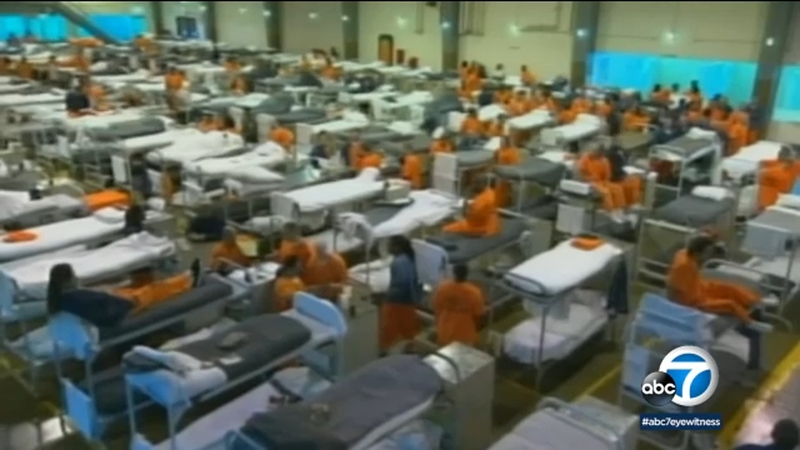 SAN PEDRO, Calif. (KABC) -- COVID-19 is tearing through the Terminal Island federal prison in San Pedro, now infecting more than half the inmate population, according to the Bureau of Prisons.

As of Wednesday, 570 of the 1,055 inmates have tested positive as well as 10 staff members. It is the highest rate of infection at a federal facility in the nation.

Loved ones report getting distress calls.

"He was scared. His body was sore. He don't feel good. He feel sick. When he spoke to us, you could, I could hear fear," says Jovenia DeFrancia whose husband was set for release in the coming week. Officials told her that her husband had contracted COVID-19 but had recovered.

According to the Associated Press, officials have stressed that infection and death rates inside prisons are lower compared with outside. Yet new figures provided by the Bureau of Prisons show that out of 2,700 tests system-wide, nearly 2,000 have come back positive. That is a 70% infection rate which strongly suggests there could be far more COVID-19 cases.

Jennifer Van Atta says her husband was ill, but not tested because his temperature did not exceed 101 degrees.

"Then he said, 'men are walking around sick everywhere.'"

Two inmates have died from the virus. Michael Fleming, 59 and Bradley Ghilarducci, 73. Both had underlying health conditions.

Of all facilities, inmates at Terminal Island are the most vulnerable. It specializes in housing inmates who need long term medical or mental health care.

The prison has set up temporary field quarters with the help of the U.S. Coast Guard to separate those who are healthy from those who are infected. In the past week, testing was scaled up to include all inmates.

Congresswoman Nanette Barragan has requested a meeting with the warden.

"Prison leadership either had no idea how to protect the inmates in their care for this, or they simply did not pay attention. Either of those is completely unacceptable," stated Barragan in a letter to the Bureau of Prisons.

Uncertain is whether recent measures slow down infections.

The BOP says family members are no longer getting updates from inmates because computer and telephone use could spread the virus.