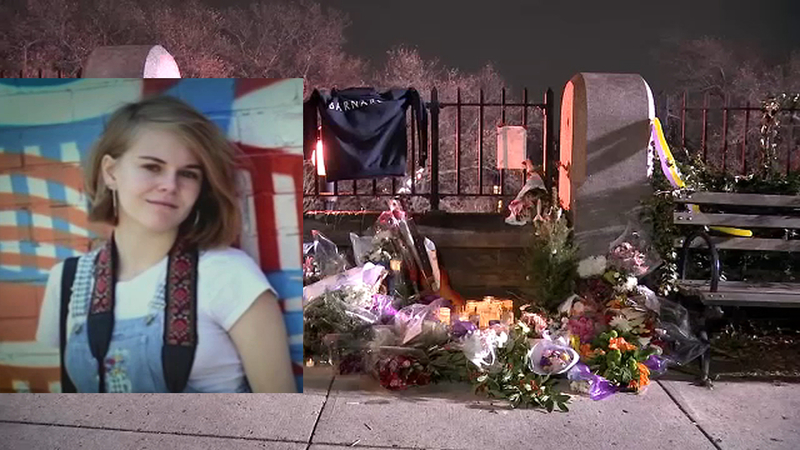 MORNINGSIDE HEIGHTS, Manhattan -- The 13-year-old charged in connection with the fatal stabbing of Barnard College freshman Tessa Majors appeared Tuesday in family court, where the judge found reasonable cause to hold the teen in custody.

Police testified the 13-year-old and two others intended to rob Majors. They had their sights set on another victim, a male, but backed out, grabbed Majors from behind and removed a plastic bag from her pocket, police testified. The teen heard Majors call for help and refuse to give up any property.

According to the police testimony, the 13-year-old told detectives he saw one of his companions stab Majors with a red-handled knife "in a stabbing, poking motion" and saw "feathers coming up from the chest area."

The NYPD continues to hunt for a 14-year-old who bolted from a car while he was on his way to turn himself in. Police believe the teen may have signs of a bite mark from the struggle with Majors.

Police officers fanned out across upper Manhattan to look for him. The police were led to that teen by the 13-year-old.

A second 14-year-old was questioned and released after he declined to make statements to detectives.

Majors, of Charlottesville, Virginia, was wrapping up her first semester at the school when she cut through Morningside Park just before 8 p.m. December 11. As she approached the stairs to exit at West 116th Street, police say a group of teens tried to rob her and take her phone.

There was a struggle, and she was stabbed multiple times. She was rushed to St. Luke's Hospital and pronounced dead.

Majors died from wounds to the torso, the city's medical examiner said Monday.

The 13-year-old's next court appearance will be December 23.

The Legal Aid Society, which is representing the teen, released the following statement.

Tessa Majors' death is a terrible tragedy and we extend our condolences to her family, friends, and everyone affected by it. We caution, however, against any rush to judgment that would only cause additional harm to the Harlem and Barnard communities. No one should seek to exploit this tragedy to press for new, ill-advised criminal sanctions against our young clients. Our client is a 13-year-old child who is presumed innocent with no juvenile record. History is full of examples of high profile cases tried in the media, rushing law enforcement to a wrongful arrest and conviction. We are absolutely troubled by the fact that our client was questioned and interrogated by police without an attorney present. We must ensure that our client's constitutional rights are not violated.