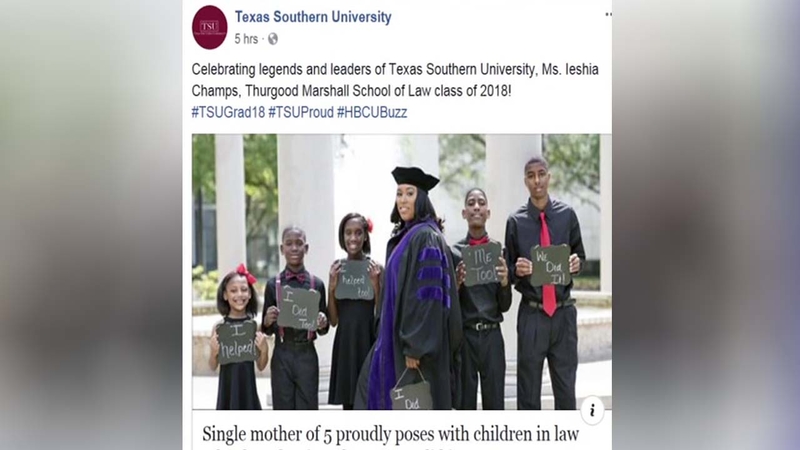 HOUSTON -- A single mom of five who will graduate from Texas Southern University's Thurgood Marshall School of Law is the perfect example of why you should never give up.

Ieshia Champs, 33, has gone viral after taking a graduation photo with her five children. In the picture, Champs wears her cap and gown and holds a sign that says "I did it."

But the phrases on the signs held by her children standing behind her make this moment even more special. The messages are variations of each other that range from "I helped!" to "We did it!"

The achievement is one that appears to have been a long time coming for Champs.

In an interview with Yahoo Lifestyle, Champs said that a fire destroyed everything she owned in 2009. She was also laid off from her job.

The father to two of her children died from cancer while she was seven months pregnant. Champs admitted that she tried to take her own life, but going to church got her back on track.

She not only received her GED, but she also earned an associate's degree from Houston Community College.

Champs holds a bachelor's degree from the University of Houston and soon, a law degree from Texas Southern.

She says her oldest son, who is 14, has been the biggest help by stepping up to take care of his siblings.