Still need to plan your trip? You may need to hop on that now as travelers begin to fill up terminals and freeways.
KABC
By John Gregory 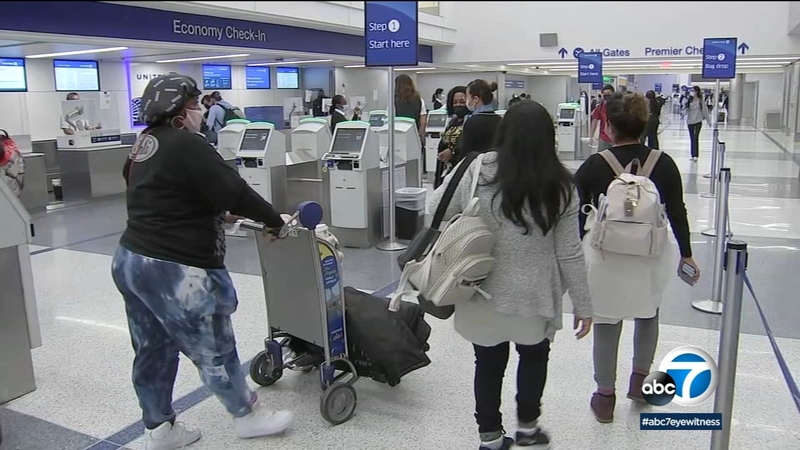 Travelers pour into LAX day for 'getaway day' before Thanksgiving

LOS ANGELES (KABC) -- Los Angeles International Airport is expecting up to two million travelers during the Thanksgiving travel period and with heavy traffic likely to fill up the freeways, the time to plan is now.

According to LAX, two million passengers will use the airport from Nov. 18-30 this year, which is twice as many as during the same time last year.

The busiest days are expected to be Friday and the Sunday after Thanksgiving.

The Auto Club of Southern California recently estimated that pandemic-weary Angelenos will be hitting the roads and airways in large numbers for the Thanksgiving weekend, with about 4.4 million Southern California residents expected to travel. The anticipated number of holiday travelers marks a 16% jump from last year.

According to the Auto Club, this year will be the second-busiest Thanksgiving travel volume on record for the region, just 3% below the 4.5 million people who traveled for Thanksgiving in 2019.

If you're driving, prepare to pay up

The average price of a gallon of self-serve regular gasoline in Los Angeles County rose to a record $4.706 Wednesday, erasing the 9-year-old record.

The gas prices in L.A. County have risen 14 of the past 15 days, increasing 11.5 cents, including two-tenths of a cent today, according to figures from the AAA and Oil Price Information Service.

This means you're paying more than $1.50 than you were one year ago.

The average price of a gallon of self-serve regular gasoline in Los Angeles County rose to a record $4.70 on Wednesday, erasing the 9-year-old.

If you need to get tested, you can get one at LAX.

COVID-19 tests are now available at an on-site testing center across from Terminal 6, inside the Tom Bradley International Terminal along Aisle C, and near the information booths on the Lower/Arrivals Level of Terminal 2.

One way to get in and out of LAX fast

Guests flying out of Terminals 7 and 8 can now reserve a time at TSA screening through a new pilot program called LAX Fast Lane.

The program's free and is being tested in coordination with TSA for customers traveling with United Airlines. To learn more, visit LAX's website.

Guests interested in this option can visit www.flylax.com/fastlane to reserve a 15-minute window to proceed through security in Terminal 7.

Where are people going?

According to the Auto Club, the top five destinations for Southern California Thanksgiving travelers will be San Diego, Las Vegas, the Grand Canyon, Yosemite and Santa Barbara/Central Coast.

Nationally, Anaheim is expected to be the second-most popular holiday destination for travelers, thanks to Disneyland. Anaheim will be second only to another Disney hub -- Orlando, Florida.