Rachel and Gabby will both be 'Bachelorettes' on the same season 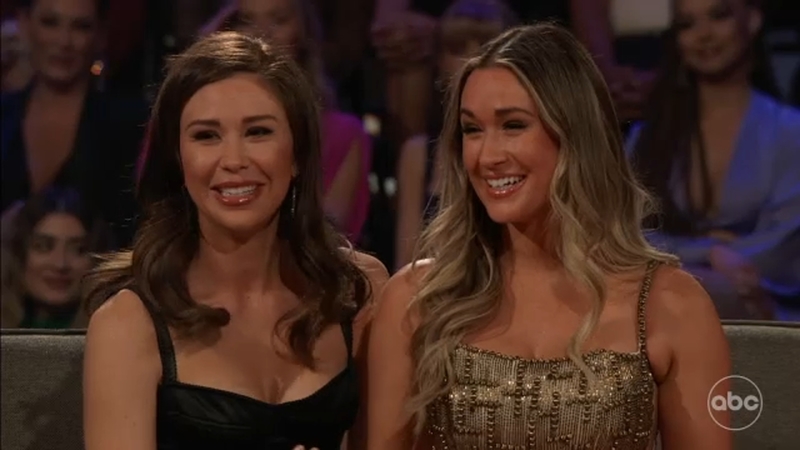 Rachel and Gabby both announced to be 'Bachelorettes'

NEW YORK -- "Bachelor Nation" watched as Rachel Recchia and Gabby Windey endured not only a "Rose Ceremony From Hell" but a double break up with Clayton Echard during the finale of "The Bachelor."

Now, these two women who showed each other such compassion and grace during their season of "The Bachelor" are getting a season of their own!

👇🌹 SPOILER ALERT 🌹👇#TheBachelorette is BACK like we've never seen it before! See you on July 11, Bachelor Nation! 💍 pic.twitter.com/5fFqz6vqbg

They will stand by each other's side yet again on the 19th season of "The Bachelorette" as "Co-Bachelorettes."

This is the first time ever that there will be two "Bachelorettes" for the whole season.

Many questions remain. Will they date the same guys? Will they ever double date?

Jesse Palmer will be back as the host as the series airs in a new summer slot.

"The Bachelorette" premieres on Monday, July 11.

MORE ON RACHEL RECCHIA
Rachel Recchia is a fearless frequent flyer looking for a man who will travel the world with her. After recently earning her private pilot license, the future is nothing but sunny skies ahead for Recchia and now she is hoping to find a co-pilot that matches her sense of adventure. As a hopeless romantic, she is looking for someone who is as playful, passionate, and spontaneous as she is. He should be nurturing, empathetic and MUST be respectful in all facets of life - to her, to family, and especially to waiters. In the end, Recchia wants to find crazy, insane love that makes sense to no one else but her and her soul mate.

MORE ON GABBY WINDEY
Gabby Windey is much more than meets the eye. Not only is she beautiful, but she also has a lot of substance, emotional depth, and a wealth of lived experiences. Windey is looking for a man with quiet confidence. She doesn't have a physical type but says that if he doesn't have a personality, then it's a hard pass. Her ideal man will challenge her, communicate his feelings and work hard to equally carry the weight of the relationship. Her one non-negotiable? Whatever man captures Windey's heart must also have room in their life for her four-legged friend because she and her Goldendoodle, Leonardo, are a package deal. While Windey would love to find a man, she isn't the type to lose herself in a relationship. She's hoping to find a man who will love her for the independent woman she is.
Report a correction or typo
Related topics:
arts & entertainmentabc primetimethe bacheloretteabcthe bachelorcominguprosesbachelorette
Copyright © 2022 OnTheRedCarpet.com. All Rights Reserved.
TOP STORIES
Girl dies after falling from moving SUV on freeway near Santa Clarita
Girl, 11, dies days after ATV crash that killed boy in Apple Valley
Man hit boy with truck and posed as cop to try to kidnap him: LAPD
8-year-old girl injured on Six Flags ride by flying cellphone: Family
SoCal gas prices drop again following 17-day streak of increases
Couple opens up about freeway shooting as bullet shoots through car
More than 90 'ghost guns' seized by deputies in Palmdale, LASD says
Show More
Here are the propositions Californians will vote on in November
Cool pavement coating aims to combat heat in Boyle Heights
1 dead in Pasadena stabbing; suspect detained after Target evacuation
Some employers offering 'pawternity leave' for workers
LAPD asks public to help identify murder suspect, woman seen on video
More TOP STORIES News