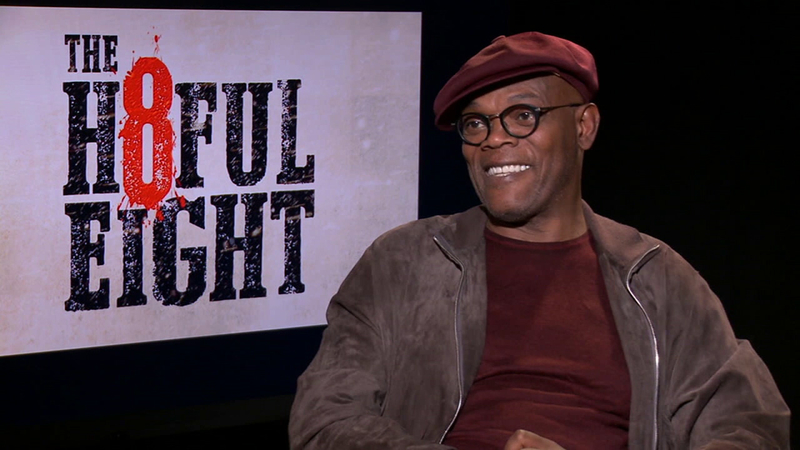 LOS ANGELES (KABC) -- "The Hateful Eight" marks writer-director Quentin Tarantino's eighth movie. And in one way or another, actor Samuel L. Jackson has been a part of six of them.

In "The Hateful Eight," Jackson plays a bounty hunter in post-civil war Wyoming.

He's trying to reach shelter before a blizzard hits, and while he makes it there, when he arrives he's faced with some tough company.

Jackson filmed some of his scenes during a cold Colorado winter, but the mountain cabin was later re-created in Los Angeles to emulate what it felt like shooting in the real log cabin.

"They refrigerated the stage to around 30 degrees so when we talked in there, you could see our breath," revealed Jackson. "Because Quentin don't believe in CGI. So there's no CGI blood and there's no CGI breathing."

"He knows how to write for actors who aren't afraid to dive off the Tarantino cliff into this wonderful pool of words that he's written for them," Jackson said. "It takes a certain kind of person to go through all this dialogue. A Quentin Tarantino script looks very different from your average movie script because it's six-eighths dialogue and most scripts you read are two-thirds things that you're going to be doing and not saying."

Tarantino has made "The Hateful Eight" into a three-hour violent, funny and definitely R-rated western.

"He made this movie in glorious 70 millimeter so people can see it in big, like, old-time movies, like people used to watch the movies," said Jackson. "When you went into the big, dark room with all these other people and enjoy the ride of what this movie was, this is what it was. These were the things that made movie stars beautiful. Not digital, where it's flat and you can see the pimples on their face, but beautiful. They look awesome, like, 'oh my gosh, he's so beautiful. Look at that."