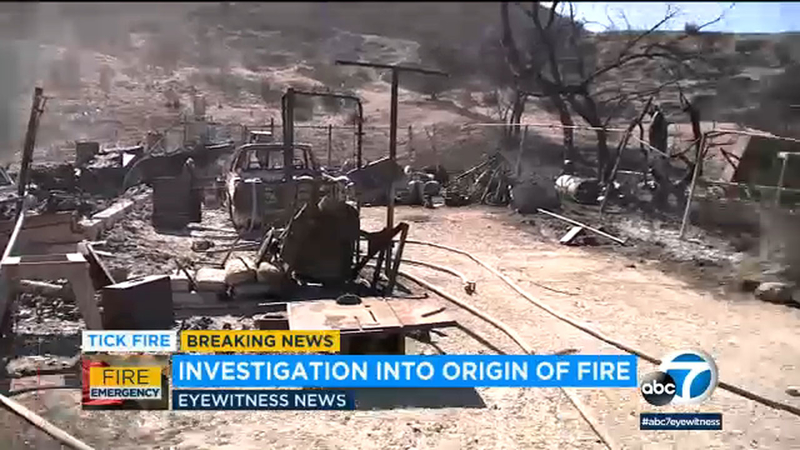 AGUA DULCE, Calif. (KABC) -- Investigators are looking at a property in a remote part of Agua Dulce as a possible origin point for the massive Tick Fire.

The burned-out home and yard in Tick Canyon is now the scene of an investigation by Los Angeles County Fire officials who believe the blaze started near there.

Two sections of the property have crime scene tape around them. In one section, there's a smoker. In the other, a fire extinguisher is laying on the ground.

The land north of the property was spared by the flames, but strong winds blew the fire south and it spread quickly.

The Tick Fire broke out Thursday afternoon. With strong Santa Ana winds and dry brush, it spread quickly as it burned downhill in medium to heavy brush. By Friday afternoon it had scorched 4,300 acres. Several homes were destroyed and tens of thousands of people were forced to evacuate from their homes.

John Marles lives next door to the Agua Dulce property and was interviewed by arson investigators. He was the first to call 911 so they wanted to ask him about where he first saw the smoke.

Marles was home Thursday afternoon when he heard a few loud booms which he believes were propane tanks. He went outside and that's when he saw a 50-foot-wide column of smoke coming from his neighbor's property.

He spoke to firefighters, who commented on items and activities that represented possible fire hazards.

"They said there's so much stuff up there, cars machinery, welding tanks. I've heard the firemen talking about cooking lunch on a barbecue, which in this windy weather is kind of dangerous. But they're not sure."

Marles was told his neighbor has been interviewed by investigators, who aren't sure how the fire started.

He's lived here for 19 years and has never dealt with a fire like this, but keeps his water tanks full. Firefighters used them Thursday.