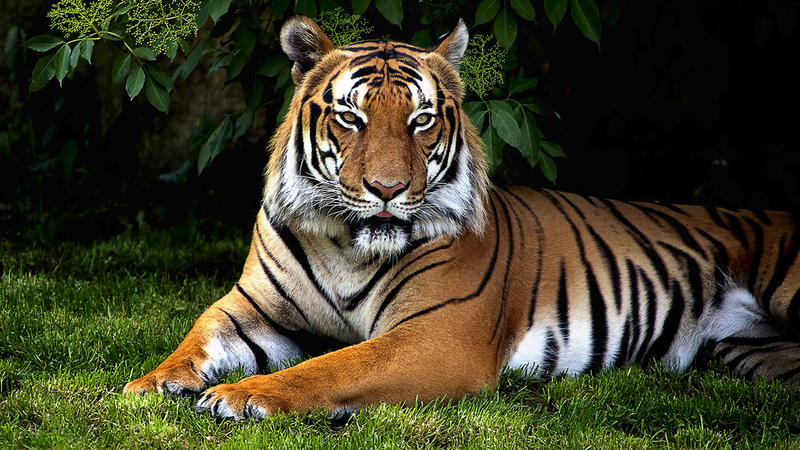 TOPEKA, Kansas -- A zookeeper was hospitalized after she was tackled by a tiger Saturday morning at the Topeka Zoo, according to local officials.

The incident happened around 9:15 a.m. in the zoo's outdoor tiger habitat, Topeka Zoo Director Brendan Wiley said. Zoo staffers initiated emergency procedures, and the tiger was lured away from the keeper with food in less than 10 minutes. Wiley credited three unnamed "heroes" with helping to bring the situation under control quickly.

The zookeeper, whose identity was not released, was alert and awake when she was taken to a local hospital. She has lacerations and punctures to the back of her head, neck, back and arm, though officials characterized her condition as stable. She is the primary tiger keeper and has worked with tigers at the zoo for years.

Hadfield identified the tiger as Sanjiv, a 7-year-old male critically endangered Sumatran tiger who came to the Topeka Zoo in August 2017 from Akron, Ohio.

"While this incident is very unfortunate, he did what a wild tiger does," Wiley said, adding that Sanjiv will not be euthanized.

The zoo briefly closed while authorities investigated the incident but has since reopened. Sanjiv has been removed from the tiger exhibit.

The Association of Zoos and Aquariums, the organization which oversees accreditation of zoos, said in a statement that it will work with the Topeka Zoo to prevent future incidents.

"We are very glad to hear the injured zoo employee is recovering," spokesperson Rob Vernon said. "As with any incident like this, the AZA Accreditation Commission will work with the Topeka Zoo to look into what happened and how it can be prevented from happening again."

The AZA also facilitates the Species Survival Plan program, which works with member institutions to ensure the survival of threatened species in captivity as populations decline in the wild. Sanjiv is a member of that program, Wiley said, and the tiger "will continue to be a valuable and viable part."