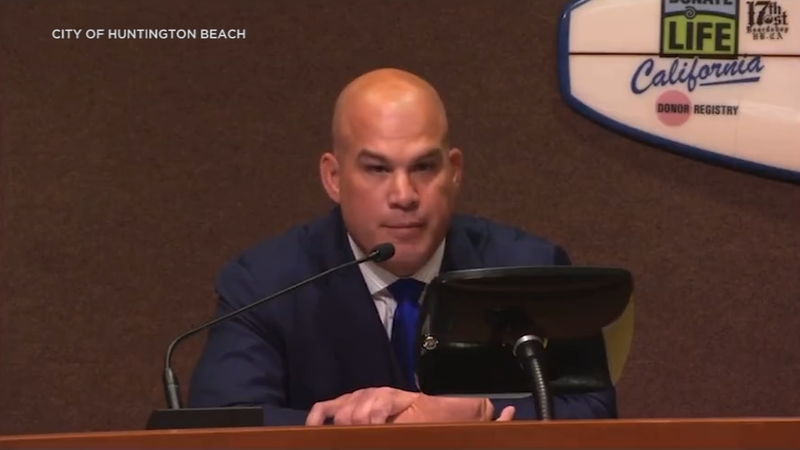 HUNTINGTON BEACH, Calif. (KABC) -- Controversial ex-MMA fighter Tito Ortiz has resigned his position on the Huntington Beach City Council, saying he was subject to frequent "character assassination" and feared for the safety of his children.

Ortiz's short tenure on the council was marred by controversy, mostly relating to the pandemic. He was an outspoken critic of mask requirements, vaccination and other COVID-19 protocols.

In one incident, he had to apologize to a local restaurant after criticizing their mask requirements and calling for a boycott on social media.

He faced another controversy when the Orange County Register revealed Ortiz had filed for unemployment benefits even though his part-time employment status with the city had not changed. It was also revealed that he was filing for the benefits even as he maintained a $4 million home and two businesses.

Ortiz, who was born in Huntington Beach, was elected to the City Council in November and was sworn in as mayor pro tem in December.

He said he plans to continue living in the Orange County city.

"I ran for this position with hopes to better my community, work on my constituents and give them a voice, making our beautiful city safe and clean. and to ensure a bright future for my children," Ortiz said in his resignation address Tuesday night.

"I was under the illusion that I was in a bipartisan position and that we all had a common goal that our city and our constituents could have. To put it frankly, that's not the case."

"From day one I was sworn in, and I was met with hostility and judgment," he added, saying he was the "sole focus of character assassination each and every week with multiple news stories and leaked personal information all of which in hopes to slander and defame my name."

He added that there were also threats to his family and he decided resigning would help protect them.

In September 2020, UFC legend Tito Ortiz was running for a seat on the Huntington Beach City Council.