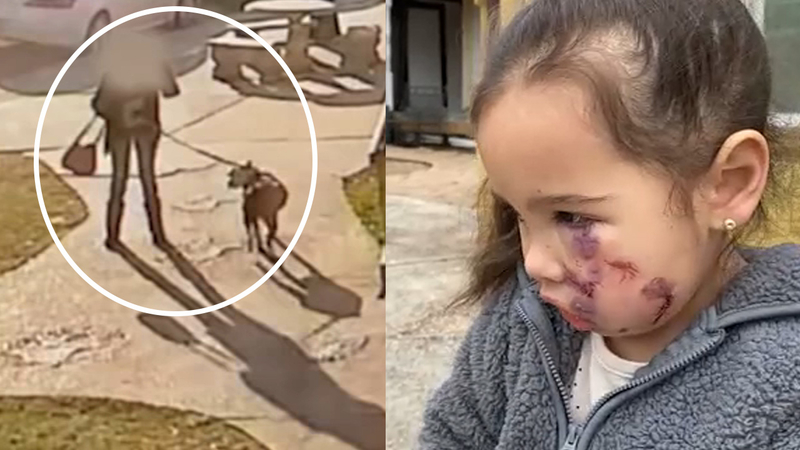 SPRING, Texas -- The investigation into the handler of a dog seen wearing a service vest that bit a 3-year-old girl in Texas is underway and new surveillance video has been discovered.

As Cleveratta Gordon-Waldroup, the girl's mother, grabbed the child to assess her injuries, her father, James Waldroup, went after the dog's handler, who was leaving the premise.

In new surveillance video obtained by our sister station, ABC13, on Tuesday, the woman and the dog are seen walking down the sidewalk with the girl's father walking not far behind her.

The video does not include audio, but body language indicates an exchange between the two.

"There was an accident," James recalled saying to the dog's handler. "[I said,] 'You cannot leave. My daughter is bleeding in a restroom and you're running down the road.'"

The woman then got in a car with a man and left.

"This gentlemen comes up beside me and I realize he is about to get in the car with this lady and I yell at him, 'Are you truly going to get in this car and drive this lady away knowing there's an accident?'" James said.

Meanwhile, the Loose Caboose, where the incident took place, has received backlash since details of the incident emerged.

Texas law states that a person cannot be turned away from a public establishment because of their service animal.

State and federal certifications are not required to identify an animal as a service animal. They are intended for anyone who qualifies under the American with Disabilities Act.

Buescher said they work with dogs for a year to train them properly to handle any situation they might encounter in public. The dogs are trained to do specific tasks for their handlers, including opening and closing doors, retrieving things and turning lights on and off.

State law maintains that a person who misrepresents an animal as having service animal training is guilty of a misdemeanor. It is unclear if the dog involved in the attack was properly trained.