Lena Hernandez, the woman seen in two viral videos delivering anti-Asian rants at a Torrance park, has been arrested for battery in connection to a 2019 incident, officials say.
KABC
By ABC7.com staff 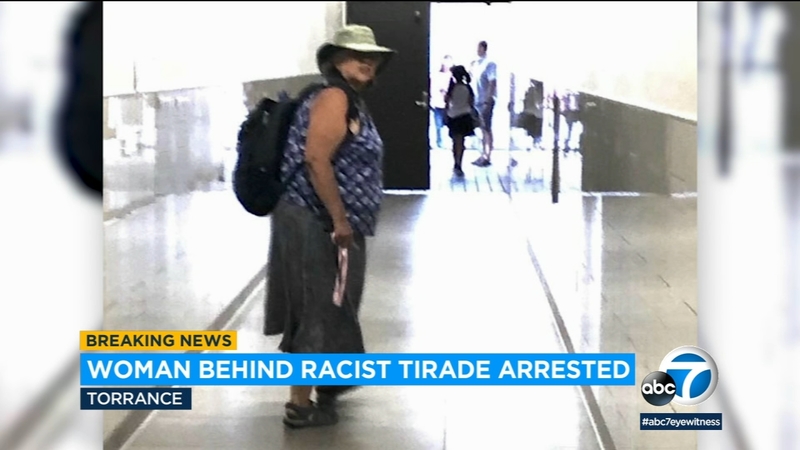 TORRANCE, Calif. (KABC) -- Lena Hernandez, the woman seen in two viral videos delivering anti-Asian rants at a Torrance park was arrested Friday in connection to a 2019 incident at a Torrance mall, officials say.

Hernandez, 54, of Long Beach had been previously identified as the woman seen telling one woman "Go back to whatever (expletive) Asian country you belong in."

The same day she was also captured on video using similar offensive language to a man, speaking in a mock Asian accent, telling him to "go home" and calling him "Chinaman."
RELATED: Hundreds of hate incidents against Asian-Americans reported

She will not face charges in those two incidents because of insufficient evidence, according to the Torrance City Attorney's Office.

But she was charged on Thursday with a misdemeanor battery charge in connection with an earlier incident and a warrant was issued for her arrest.

Authorities found her Friday and took her into custody on the arrest warrant. She was released from custody later Friday on $1 bail.

Because of COVID-19, most such misdemeanor cases in the Los Angeles area have resulted in the suspect being released after arrest with low or no bail.

The woman seen on videos posted on social media in a series of racist altercations against members of the Asian community in Torrance has been identified as a 56-year-old resident of Long Beach, authorities announced Friday.

The arrest was in connection to an October 2019 incident at a local mall. After the videos from the park went viral, another woman stepped forward to say she had reported to police at the time that earlier altercation but nothing was done about it at the time. That incident involved Hernandez allegedly verbal assaulting a custodian and then physically assaulting the woman who tried to intervene.

The alleged victim reported it at the time to Torrance police, but says no action was taken.

I filed a police report on this same lady back in October 2019 due to a physical attack ON ME. Nothing came of it. What are you going to do about it NOW? @TorrancePD pic.twitter.com/mKObXxxDba

The person tweeted: "I filed a police report on this same lady back in October 2019 due to a physical attack ON ME. Nothing came of it. What are you going to do about it NOW? @TorrancePD"

After the videos of the park incidents went viral, the Torrance City Attorney's Office filed a criminal complaint for battery against Hernandez, a misdemeanor.

Other people are coming forward to report hostile encounters with a woman who was recorded delivering an anti-Asian rant in a Torrance park. This raw video shows one such alleged incident.