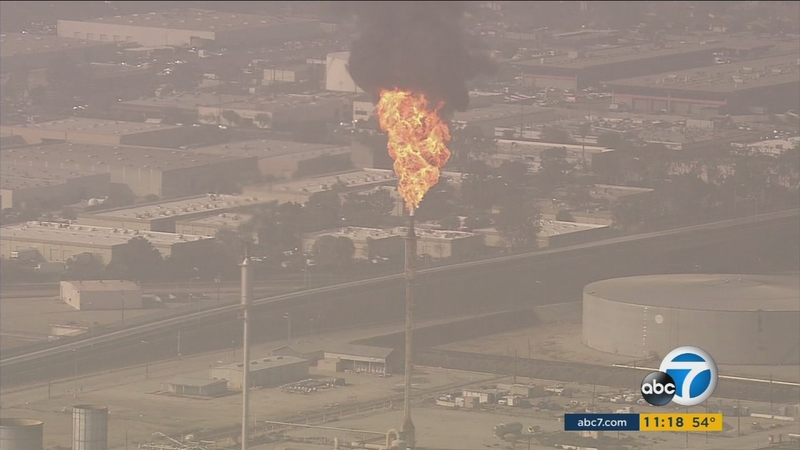 TORRANCE, Calif. (KABC) -- The Torrance Police Department issued an alert for the city, notifying them that the Torrance ExxonMobil Refinery had an explosion and fire early Saturday morning.

Authorities said the incident happened around 6 a.m. and 36 firefighters responded to the refinery. Fire crews knocked down the blaze within 30 minutes. It was unclear what caused the fire.

All safety systems at the refinery operated correctly and personnel were safe, police said. No injuries were reported, and the fire did not impact anything offsite.

The fire was reported to the South Coast Air Quality Management District and California Office of Emergency Services, police said.

People gathered in protest at the refinery later in the afternoon on the 2-year anniversary of an explosion at the plant that left two people injured. The explosion also launched an 80,000-pound piece of equipment within feet of a structure that housed a highly volatile and toxic substance, modified hydrofluoric acid.

"Exactly two years ago, an explosion at the Torrance Refinery nearly resulted in a catastrophic disaster that would have released deadly modified hydroflouric acid (MHF) into the surrounding South Bay communities. It was an Act of God that helped prevent an 80,000 pound piece of equipment from striking and rupturing a MHF tank, which could have resulted in over 100,000 deaths or injuries.

On the anniversary of that explosion, we get another explosion and a fire. It is completely unacceptable to have deadly MHF at failing refineries.

I commend the South Coast AQMD for its recent proposal to phase out deadly MHF at refineries in Southern California. I urge SCAQMD to act with urgency. Refineries are not supposed to have explosions. We need to ban MHF as soon as possible. God may not warn us again."

California workplace regulators fined ExxonMobil more than $500 million for the violations related to the explosion.