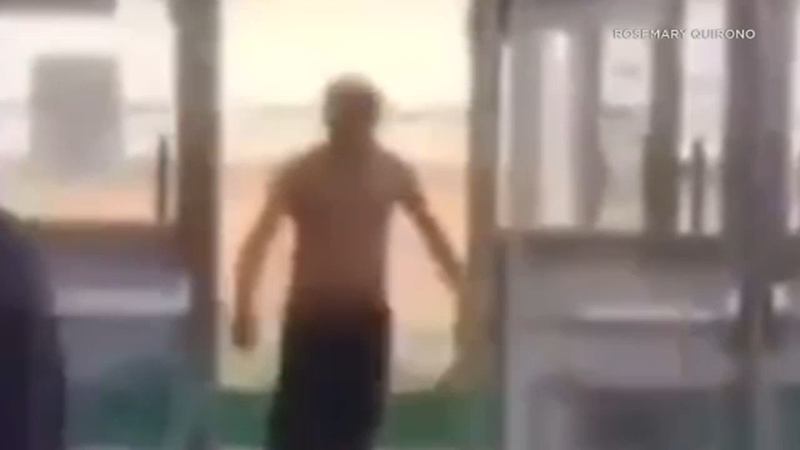 EAST LOS ANGELES (KABC) -- Disturbing new video appears to show a sword-wielding man walking onto the campus of an East Los Angeles high school Wednesday morning before he was fatally shot during a deputy-involved shooting.

The man, who was not immediately identified, was being chased by Los Angeles County Sheriff's deputies around 9 a.m. after allegedly violating the conditions of a restraining order at a home on the 900 block of Miller Street, less than a mile away from the school. Authorities say the suspect was causing a disturbance at the home and ran away when deputies arrived.

During the foot pursuit, the suspect fled onto campus, where he was shot near the front of the school after reportedly refusing to follow orders and advancing toward one of the deputies.

Authorities said at a press conference that no students or faculty were involved in the incident. Officials added that the sword the man was allegedly carrying measured about 3 feet long, though it isn't clear if he was holding one in that captured video.

According to a tweet from the Los Angeles School Police Department, the campus was placed on lockdown and "all students and staff are safe."

Many students on campus reported hearing gunshots, including one who called her parents on FaceTime.

Jeronimo Banuelos said the incident should spark a conversation about ways to keep students, like his daughter, safe while at school.

"Definitely to try to see what else we can do, try to get a meeting, and try to see if we can come up with better solutions to try to keep the school safe," he said.

Neighboring schools were not affected.

"We want to assure our #LAUSD community that we do not have an active shooter threat," the department said, adding that the school district's crisis response team was at the campus.