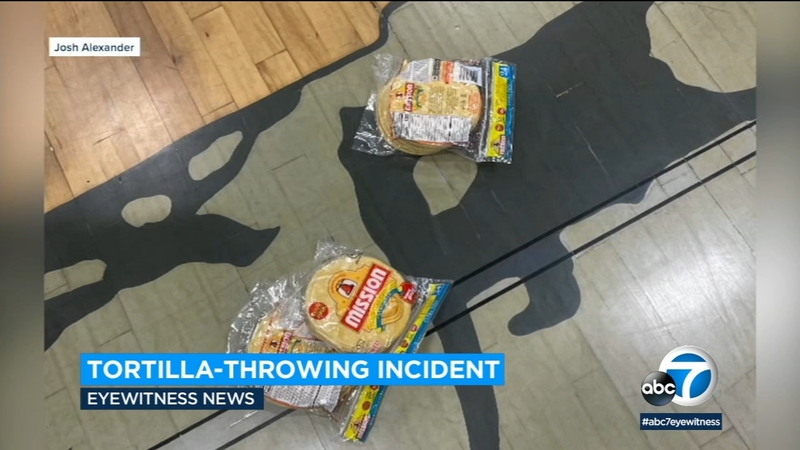 Man who supplied tortillas in SoCal taunting incident speaks out

"After a thorough review and analysis of the incident following the conclusion of the Division 4-A regional basketball championship game between Coronado High School and Orange Glen High School, the CIF state executive director reiterates that discriminatory and racially insensitive behaviors toward an opponent contravene the principles of education-based athletics," a CIF statement reads.

"In this instance, there is no doubt the act of throwing tortillas at a predominately Latino team is unacceptable and warrants sanctions."

A San Diego-area school district voted to fire the head basketball coach after tortillas were hurled at a team from a mostly Latino high school.

"While consequences are warranted for such an egregious action as throwing tortillas at a predominantly Latino team and the sanctions below are being levied on the athletic program at Coronado High School, we must all be aware that behavior does not normally change with sanctions alone," the CIF statement continued.

"The path towards real change comes with the development of empathy for those who are on the receiving end of this type of degrading and demeaning behavior, no matter the proffered intent of that behavior."

The administration of Coronado High has also been "strongly encouraged" to engage with the administration at Orange Glen High School to develop a positive relationship between the two school communities.

Coronado Unified School District Superintendent Karl Mueller said last week that after reviewing audio and video accounts of the incident, no evidence has turned up requiring the school to forfeit the game.

In a three-page letter sent to California Interscholastic Federation executive director Ron Nocetti Friday, Mueller responded to calls by activists and others for Coronado to forfeit the game.

"In the first-person accounts, audio and video that we have reviewed to date, we have seen no evidence of antagonization by the players actions or behaviors that justify forfeiting the game," Mueller wrote. "The young men on the court played hard, fairly and earned the championship win."

On Wednesday, a news station in San Diego reported that a Coronado alumnus, Luke Serna, said he brought the tortillas to the game and denied that the act had a racist component. He said he was evoking a tradition at UC Santa Barbara, which he also attended.

"The tossing of tortillas is used as a celebratory action by the UC Santa Barbara Gauchos at various sporting events including basketball and soccer," Serna said.

Coronado coach J.D. Laaperi was fired by the Coronado Unified School District Governing Board in an emergency meeting June 22.

The Escondido Union High School District board, at a special meeting Thursday, passed a resolution denouncing racism and racial discrimination, and affirming its support for equity, safety and well-being of all students.

Dozens of Orange Glen supporters marched along Orange Avenue in Coronado on Saturday, some carrying a large Mexican flag. They decried what they saw as a racist act and called for the team to forfeit the game.

Sen. Ben Hueso on Thursday called on the CIF to revoke Coronado High's regional championship in response to the incident.

"This intentional act was designed to be racist and should not now, nor ever, be tolerated," Hueso, D-Chula Vista, wrote in a letter to CIF Executive Director Ron Nocetti and the leaders of the San Diego Section.

"Failure to impose swift and appropriate justice will become a tacit endorsement of the act itself by the CIF and violate CIF's own principles of ethical character-building for student athletes."