Torrance community members are trying to gather support to keep the Toyota Sports Complex from closing at the end of the month.
KABC
By Ashley Mackey 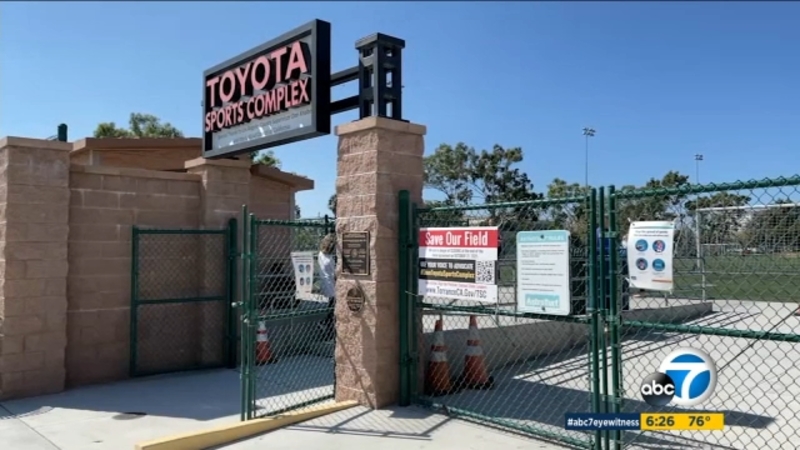 TORRANCE, Calif. (KABC) -- Torrance community members are rallying together in hopes of saving what they say is an essential part of their community.

"Now more than ever, we need to be creating opportunities for our children to be physically active, not eliminating them, like the State Office of the Courts wants to do in this case," said Julie Sediq, a Torrance resident and parent.

"It's devastating to the local neighborhoods," said Bonnie Ahmad, another Torrance resident and parent. "There's so many neighborhoods nearby and kids just walk over and use the facility, and to see it sitting here vacant would be horrible."

Torrance had been paying a dollar a year under the current lease but city officials said they invested nearly $7 million into the sports complex.

The current 10-year lease between the city of Torrance and the Judicial Council of California for the popular 6-acre Toyota Sports Complex is ending and the fields are said to be closed at the end of the month.

"We have for the past year been negotiating in good faith with the Office of the Courts to attain a new lease that would succeed the expiring lease," said John La Rock, community services director for the city of Torrance. "Unfortunately, those negotiations have not gone well."

According to city officials, the Judicial Council plans to build on the property, but wouldn't begin the development until at least 2032.

"Until that time, we see it as important that we remain here," said La Rock. "And it remains an amenity for our community and our families and our children so that they can continue to recreate, socialize, particularly coming out of the pandemic phase."

City representatives said about 5,000 people use the facility weekly. They said the closure of the sports complex would make a huge impact on the local community, especially the youth.

"These kids have felt so much isolation and separation from their community, their friends, their schools," said Clint Paulson, regional commissioner for the American Youth Soccer Organization. "To get them out and being able to interact with one another is just more important than it's ever been and if we lose spaces like this, we won't be able to give the kids those type of opportunities."

City officials said an agreement between them and the Judicial Council could not be successfully made and are now relying on the support of the community. They've started an online petition and are planning a rally on Saturday, Oct. 16.

"I think a lot of people are just barely hearing about this," Paulson said. "But so far, we're getting a lot of support, which I frankly expected because there's so many people that this impacts."

The sports complex is scheduled to close Oct. 31.