KABC
By Marc Cota-Robles, Rob Hayes and ABC7.com staff
HAWTHORNE, Calif. (KABC) -- Two drivers were killed Friday morning in a crash involving a tanker truck and an SUV on the 105 Freeway in Hawthorne, authorities said.

Firefighters doused massive flames in the aftermath of the wreck, which happened about 5:13 a.m. and prompted the shutdown of all lanes near Prairie Avenue, the California Highway Patrol said.

The CHP did not comment on the cause of the crash, but witnesses pointed the finger on the driver of a silver Land Rover who was aggressively swerving in and out of traffic.

According to the Los Angeles County Fire Department, the driver of the Land Rover and the driver in the tanker truck died at the scene. They were not immediately identified.

The SUV "jumped up a little bit and lost control because his car was tilted -- so swerving to the left," the witness said. "And there was a tanker with a truck driver. The truck started to make a scissor -- the tanker itself detached itself.

"The silver Land Rover crashed into the divider," he said.

More than an hour after the collision, the blaze remained active as firefighters apparently decided to allow it to burn itself out. By the afternoon, what was left of the two vehicles: a tangle of scorched metal.

Crews remove what’s left of the tanker truck and Land Rover from the fiery 105 freeway crash. Not much remains. #105 #Hawthorne pic.twitter.com/dKpoWiV2M3

Freeway traffic was at a standstill for hours at the crash site, located about 3 miles east of Los Angeles International Airport.

Several travelers were seen abandoning vehicles that had been headed for LAX. With suitcases in tow, they walked off the freeway in an effort to catch their flights. Strangers helped one another by carrying their bags over the fence.
EMBED More News Videos

Many stranded on the 105 Freeway after the fatal tanker wreck were headed to LAX. Some climbed a freeway fence - with wheelie bags in tow - to catch their flights.

Others patronized a food truck owned by AC Catering, which opened for business in the middle of a westbound lane.

"We're hoping to get out, to get the plane, but it looks like we're not going to catch our plane," said stranded traveler Felipe Alvarado. "So now we're just here waiting, patiently, like everyone else. We ain't got no choice."

The eastbound side was reopened shortly after 8 a.m. After several hours, CalTrans officials said the structural integrity of the freeway was inspected and only minor damage to the surface was found.

Westbound lanes were reopened a little after 7 p.m..

The Metro Green Line service was also shut down between the Hawthorne/Lennox station and the Vermont/Athens station because of damage from the fiery wreck. 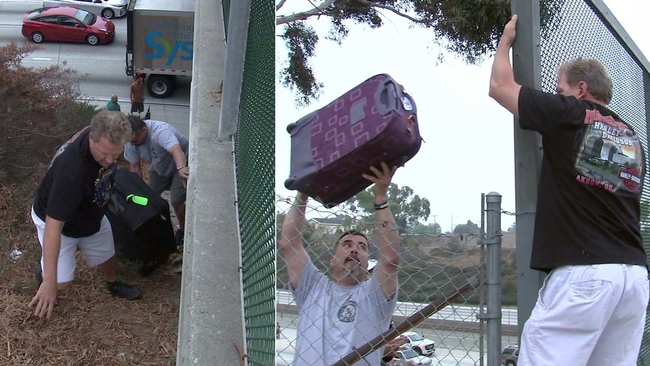 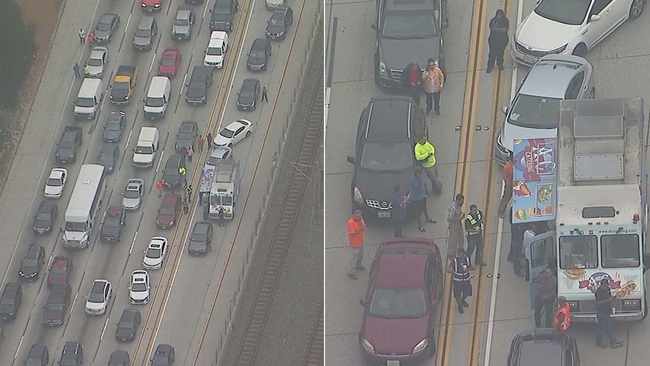