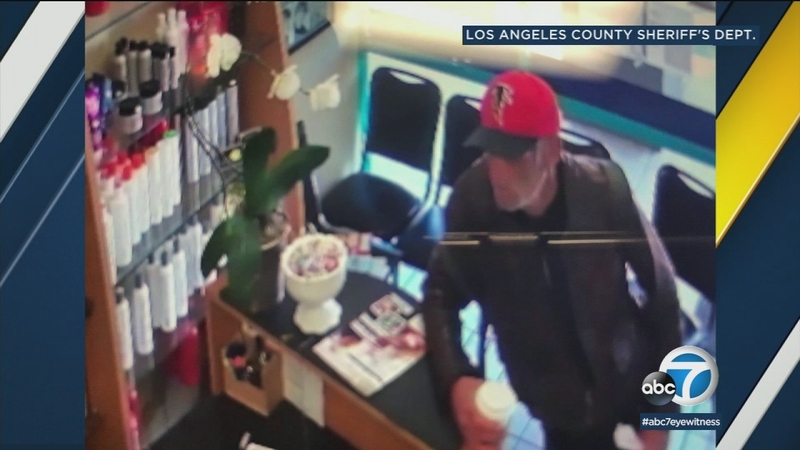 ROLLING HILLS ESTATES, Calif. (KABC) -- A person was detained in connection with the seemingly random stabbing death of a woman at a Rolling Hills Estates mall parking lot during the day.

The Los Angeles County Sheriff's Department released a photo of a man believed to be a person of interest in the case. On Friday, sheriff's investigators said a person who resembles the man in the photo was detained pending questioning by detectives.

Authorities said the detainee, identified as a local transient, was taken to the Lomita sheriff's station to be questioned.

He was later arrested for an unrelated charge, authorities said. While he was in custody, he was interviewed about the homicide. A warrant was also obtained to check for any physical evidence related to the man.

Authorities said no evidence has developed in order to arrest the man on suspicion of killing the woman, but he remained in custody for the unrelated charge.

Local business owners who have had run-ins with the transient man said he has been a problem for some time in the area.

"He comes, he shoplifts, he causes trouble," said local businessman Mike Amini. "He has no respect for anybody, and all the time he comes, he creates problems."

One woman, who was so intimidated by the man, asked that her face not be shown on camera.

The victim has been identified by coroner's officials as 66-year-old Susan Leeds, of Rancho Palos Verdes. She leaves behind a husband and two grown children, authorities said.

Leeds' body was found inside of her vehicle, parked in the parking structure of the Promenade on the Peninsula shopping center around midday Thursday.

She was initially located by other shoppers. By the time help arrived, she was already dead, stabbed several times in her upper body.

Sheriff's deputies searched for the suspect, even using bloodhounds. Investigators had very little information to go on. Deputies canvassed the area, interviewed witnesses and looked at surveillance video.

This is the first homicide on the Rancho Palos Verdes peninsula in nearly a decade. It is unknown if Leeds was potentially the victim of a robbery. At this point, investigators do not know a motive behind the killing.